Regulation vs. Prosperity... America goes gently into that good night

Thanks to the Founding Fathers, in 2013 the United States has built the wealthiest nation in history on free markets and the rule of law. (And thanks to their more recent successors, we’re simultaneously the poorest… but that’s another discussion.) While the Founding Fathers were remarkable for much, what is perhaps their greatest legacy is their recognition that Americans, like all men, are imperfect.

In 1787 after almost a decade of the greatly flawed Articles of Confederation, the 2nd Continental Congress was formed and would eventually produce the Constitution we have today. What was so amazing about the document was the fact that it had built into a wide variety of it limitations and strictures intended to both delineate and restrict power. The overarching idea that powered the construct of the Constitution was the fact that an unfettered government would become tyrannical. The founders understood that limited government was supposed to act only in those areas that citizens could not on their own – think national defense, courts, treaties – and, importantly, only based on the powers granted to it under the Constitution.

Fast forward to today where their work has proven itself well placed with a prodigious American prosperity been built on its foundations of free markets and the rule of law. More than any nation in history, we have benefited from the fact that virtually any American citizen or resident has had the opportunity to start a business. Sometimes they invest their money in a neighbor’s plan to start a sandwich shop and other times they roll up their sleeves and start something on their own. More than anything in the world, that freedom of opportunity has set America up for success and driven us to achieve the greatest level of wealth ever created. 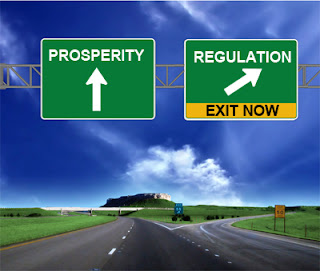 Unfortunately, that freedom of opportunity is rapidly disappearing… In an effort to ameliorate every problem that might befall a citizen, the federal government has passed laws and created regulations that touch virtually every aspect of our lives. This Sisyphean exercise has not only failed, but it has laid the foundation for the undermining of the freedom and opportunity that made America the wealthiest nation in the world.

Economic growth comes largely from small businesses. 70% of all new jobs come from small businesses. Small businesses are where innovation begins. Think about it. You’re probably not surprised that the PC revolution was not driven by the behemoth IBM but rather by two upstart companies named Apple and Microsoft. You’d probably not be surprised to discover that ESPN was founded by an unemployed sportscaster rather than one of the three major networks. You’re also probably not surprised that it was Google, a company started by two college students, that figured out how to effectively harness the opportunity in online advertising while America’s mega media companies stumbled from one failed business model to the next. Big companies always start out as small ones.

Small business is where new ideas get to play themselves out and figure out what works. This is because small companies are typically nimble, they don’t have legacy products or services they are concerned with undermining, and perhaps most importantly, owners and investors are usually very close to the action. They normally are right in the mix of where everything is happening so they can observe and react quickly to the needs of markets. Big lumbering, billion dollar companies with tens of thousands of employees and multiple levels of hierarchy rarely have the insights or quickness to see opportunities ahead.

And of course starting a business is risky. You never know if customers are going to like your product or service. Suppliers can be unyielding in their financial terms. Employees can be fickle and unreliable. Competitors abound. And of course it can be incredibly expensive. Nonetheless, some intrepid Americans do venture forth to hang out their shingle and pursue the dream of turning an idea into a flourishing business. They might get rich, but they might go broke too… but to them it’s worth the risk.

And as if it were not hard enough to find success as a small business, it’s becoming far more difficult in one respect that the entrepreneur has very little control over: Regulation. 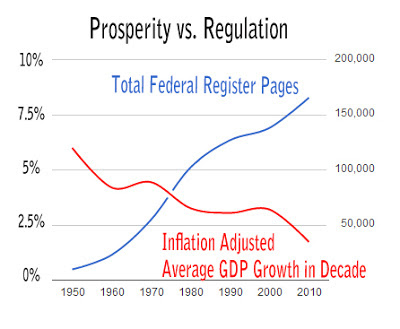 The nearby chart shows the growth in federal regulations over the last 60 years. That growth is set against a GDP growth chart for the same period – measured by average rate of growth over the decade. The correlation is crystal clear, and painful to behold.

Each page of the Federal Register represents dozens of byzantine regulations that must be administered by millions of bureaucrats, often with draconian consequences for violations. For small businesses such regulations are nothing short of a nightmare. Not only do they have to navigate the equally challenging state and local government regulations, but they must increasingly deal with mandates crafted in Washington by bureaucrats who are professional pencil pushers with no experience in actually running a business, nevermind an awareness of the unique challenges faced by small businesses.

The Federal Register is the catalog of all federal regulations. In 1950 it included 9,745 pages of regulations. During the decade that followed the US economy grew at an average rate of 4.2% a year (inflation adjusted). In 1960 it had 22,877 pages and growth over the next ten years stayed essentially stable at an average of 4.44% per year. That was the last decade of treading water. By 1970 the Federal Register would grow to 54,834 pages and GDP growth over the subsequent decade dropped to an average of 3.75% per year. By the year 2000 the document had ballooned up to 138,049 page and as one might expect, the following decade’s growth was an anemic 1.73% per year on average. Today the Federal Register weighs in with a full 170,000 pages of regulations.

As regulation has increased GDP growth has decreased. That is no coincidence. Perhaps the greatest way regulation cuts growth and hinders prosperity is that it smothers small businesses and benefits large ones. Unlike big businesses, small businesses can’t generally afford lobbyists to influence legislation nor armies of lawyers and accountants to figure out how to minimize its impact. The result is less innovation, fewer jobs and at the end of the day, smaller GDP growth and less prosperity.

And if you think this discussion of the correlation between GDP and regulation is just a game of semantics, think about it this way. Take your income… How would you like to double it? At the 4.4% average annual growth rate the experienced in the 1960’s, it would take you 16 years to double it. Not quick, but not horrible. At the 1.7% rate experienced during the first decade of the 21st century, it would take you 41.6 years. And that’s not an anomaly, it’s 50 year trend. More regulation means less growth, which means less prosperity.

With the regulations spawned by Obamacare only now making their way onto the books we can expect even more slowing to come. This is not a Democrat vs. Republican issue… this is a conservative vs. liberal issue. As the liberal progressives have sought to use the force of government to create a perfect world where everyone lives in a state of bliss unencumbered by the sometimes harsh vagaries of life and protected from the consequences of choices, they have in fact destroyed the fount from which emerged the American prosperity that allowed them to focus on frivolous things in the first place. Here’s an analogy: In order to guarantee every passenger is comfortable and that a plane could never crash, liberals have loaded the plane up with so many pillows and so much safety equipment that it can’t get off of the ground in the first place. As anyone stranded on the tarmac for seven hours inside a JetBlue plane could probably tell you it doesn’t take long for dystopian conditions to begin to emerge.

Just as aerodynamics of flight can’t support a plane that can’t get off the ground, free market economics can’t drive an economy that is so constricted by regulation that it can no longer be called a free market in the first place. Welcome the America of the 21st century, where prosperity becomes but a distant memory and a once great people go gently into that good night…