A normal person's (as in non-politician's) perspective on the Sequester... Or How I Came to Love the Sequester

Senator Everett Dirksen famously once said “A billion here, a billion there, pretty soon, you’re talking real money.” If his billion here and billion there added up to $44 billion then he’d have been talking about the Sequester that seems to be everywhere in the news today. 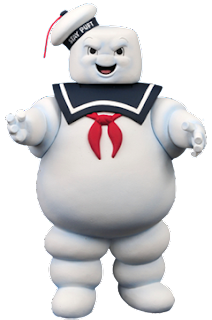 For those not familiar with the Sequester, it is the mandatory cut in federal spending set to take place on March 1st. President Obama essentially warned that the country would likely come to a screeching halt if the mandated cuts actually occurred. Among the damage would be: thousands of teachers and firefighters losing their jobs, 800,000 Defense job losses, nursing home cuts, cuts to Medicare, airports close, hundreds of thousands would miss out on flu vaccinations and cancer screening. Apparently the Myans were just off by a couple of months.

Back to the real money… $44 billion is a lot of money. That’s the kind of money Mark Zuckerberg looks at and goes “Wow”. When you imagine that the Sequester is going to cut that much from the federal budget that seems like a lot… until it’s not.

In 2012 the federal government spent $3.538 trillion. If nothing is done and the Sequester kicks in, in 2013 the federal government will spend $3.553… yes, that’s right, $15 billion more! Somehow, President Obama is trying to suggest that if the country does not figure out how to dodge this $44 billion Sequester bullet, the foundations of our society are going to come crumbling down upon our shoulders. (The total 2013 “cut” includes the aforementioned $44 billion plus $41 billion cut in future years but attributed to 2013.)

That simply makes no sense.

Given those numbers, are you going to spend a week knocking on your neighbor’s homes telling them they have to demand the homeowner’s association roll back the dues because you only received a $211 raise this year? Are you going to call your relatives and tell them that you are going broke and that you may lose your house because you only got a $211 raise this year? Are you going to go to your boss and tell him that you’re probably going to have to stop working if he doesn’t give you another $500? Probably not.

If your situation were really as dire as the president suggests and that you were really in danger of losing your house, you’d probably find ways to cut your budget. Even if $40,000 of your expenditures were somehow shielded from cutting – In the case of the government cuts, they are mostly coming out of discretionary spending, half from defense (other than war funding) and half from the rest of the budget. That means that things like Social Security and Medicare payments are mostly exempt – you’d still have a pool of $10,211 from which you could cut the necessary $500. You might not like it, but you could probably eat at McDonalds more often and Chipotle less often. You might rent movies on Netflix rather than go out to the movies as often. You might even buy generic vegetables rather than Green Giant. At the end of the day you would probably figure out how to limit yourself to spending $211 more than you did last year without doing too much damage to your lifestyle.

But then you’re probably not Barack Obama. The president and his administration have suggested a wide range of disasters that will befall the American people if the Sequester goes into effect: There will be a shortage of meat, 125,000 people might become homeless, thousands of FBI would be lost, 100,000 kids would lose Headstart or childcare benefits, terrorist cables would go untranslated, workplaces would be less safe, the Pacific naval power would shrink by a third, firemen and police around the country would be cut, and nuclear waste would pile up. The president suggests all this will occur and much more. Indeed it seems as if America might simply collapse into anarchy if the president doesn’t get tax hikes passed.

Of course none of that actually has to happen. The president has the power to apply the cuts wherever he wants within the discretionary programs themselves. One might think that rather than closing national parks the president might look at cutting things like the Department of Energy program that spent billions of dollars on companies like Solyndra and Fisker. Instead of cutting job training for veterans the president might look at cutting the Obamaphone program that is providing free phones to millions of ineligible recipients. Or maybe instead of threatening to spend less money fighting terrorism he could figure out how to stop providing unemployment benefits to prisoners sitting in jails around the country. There is no doubt substantial waste on the military side as well, and rather than threatening to limit soldier’s training perhaps the president could reconsider giving tanks and fighter jets to the Islamists running Egypt. 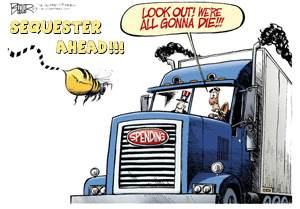 The Sequester reminds one of the Base Realignment and Closure Commission program which was inaugurated under President Reagan. This was a program where expendable military bases were targeted for closure. Congress was forced to either take it or leave it and thus provided members with a way of escaping blame when a base closed in their districts. It too was a somewhat blunt instrument, but it worked. Given that the Sequester was the president’s idea in the first place, he should stop the demagoguery and embrace the opportunity to take a first step to getting a handle on government spending. Indeed, he should offer another Sequester, or a series of them that make actual cuts in spending rather than just phantom cuts in expected increases. By shielding members of Congress from the slings and arrows that sometimes follow cuts in programs that impact their districts, he would likely find greater support than he would in any item by item battle. Not pretty, but it could be effective. Not likely either because doing anything that actually benefits the country rather than Barack Obama would be unlike Barack Obama.

That Loudmouth Troublemaker Is An FBI Snitch
Townhall
'Every word of this is bulls**t': Washington Post finds 17-year-old who opposes Gov. Ron DeSantis's critical race theory ban
Twitchy
Candace Owens and Brandon Tatum are not Who They Pretend to Be
Redstate
Defeat Racism With This One Weird Trick
PJ Media