Of all of the characteristics one might ascribe to Susan Rice, prescience is probably not the first thing that comes to mind. Surprisingly however, five years ago she said something that demonstrated a momentary clarity of vision that is staggering. In a March 2008 interview she said the following: “Clinton hasn’t had to answer the phone at 3:00 in the morning, and yet she attacked Barack Obama for not being ready. They’re both not ready to have that 3 AM phone call.” If the events immediately following Benghazi showed Ambassador Rice to be a hapless marionette of the administration, the event itself demonstrated clearly that she was spot on five years ago.

Unfortunately, Benghazi demonstrated something far more sinister than just an administration’s feeble attempt to cover up its incompetence. It demonstrated the role that a pliant media can play in impacting world affairs. 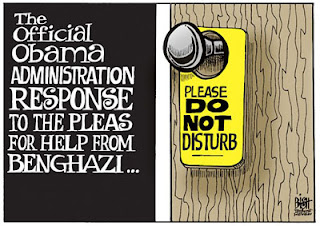 Here we are five months after Benghazi and we’re only now discovering that President Obama was detached during the entire attack. According to Defense Secretary Leon Panetta, on September 11, 2012 he attended a pre-scheduled 30-minute session with President Obama at approximately 5:00 PM EST. During that meeting they spent about 20 minutes talking about the surrounded American embassy in Egypt and the emerging situation in Benghazi. Panetta states that the President left operational details “up to us.” After that, for the next seven hours during which the American consulate and annex in Benghazi were under attack and the American Ambassador killed, Panetta heard nothing from the Commander in Chief, nor from anyone at the White House. Nothing. Not a call, not a text, not an email, no smoke signals. Nothing. Our ambassador was dead along with three other Americans and President Obama was not engaged.

We later learned that Washington sent not a single ship, plane, soldier, or marine to help. Between midnight and 2:00 AM EST – between five and seven hours after the attack began – Secretary Panetta issued orders telling two Marine anti-terrorism teams in Rota, Spain to prepare to deploy to Libya. They would not arrive for another 10 hours, long after the attack was over.

Why were there no assets closer to respond more quickly? According to General Martin Dempsey, Chairman of the Joint Chiefs of Staff, because the State Department did not ask for them. But one would expect, given that the American Ambassador in Libya wrote a letter on August 16th stating the consulate in Benghazi could not sustain an attack, that the State Department would either request more security or close the consulate. You’d be wrong. Why? Because Hillary Clinton claims that neither she nor anyone in her office ever saw the Ambassador’s cable.

So, to recap, for at least 7 hours after the first murder of an American Ambassador in 30 years, the Commander in Chief couldn’t seem to find the time to talk with his Secretary of Defense in order to find out what was going on in Benghazi, ask what could be done to save the others under siege, or to order a single boat, plane or man to the scene. But he could find time to spend an hour on the phone with Israeli Prime Minister Benjamin Netanyahu, seeking to shore up Jewish voters shaken by the troubled relationship. At the same time, on the anniversary of September 11th, in a city known to be a hotbed for Al Qaeda activity in a country in the midst of revolutionary shockwaves, the State Department was somehow unaware that increased security measures were necessary, despite the US Ambassador’s explicit concerns. Then, once the attack began, despite tens of thousands of troops stationed in the Middle East and Europe, there was no way to get a single resource to Benghazi in less than 15 hours. To top it all off, on September 16th the administration sent the hapless Susan Rice to put forth that absurd claim that the attacks were the result of an anti-Muslim YouTube video rather than a planned terrorist attack timed for the anniversary of 9/11. 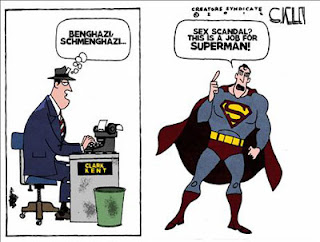 Now imagine that instead of Barack Obama sitting in the White House two months before an election, it had been George Bush. Is it even remotely possible that Benghazi would not have become the center of the greatest political firestorm in US history? Is it even possible that some Woodward and Bernstein wannabes over at the New York Times, CNN, TIME or ABC, CBS and NBC would not have spent the next month turning over every single rock and looking behind every door and seeking out every disgruntled State Department or DoD employee to find out those things we are only learning about now? That the President didn’t communicate with his Secretary of Defense for more than 7 hours? That Hillary Clinton had left Ambassador Stevens and the rest of the Americans to fend for themselves on the anniversary of 9/11. That during the entire eight hour attack not a single asset was sent to Libya to help. Not one.

Had the Benghazi debacle occurred two months before an election on the watch of any Republican president the mainstream media reaction would have made Watergate look like a high school cheating scandal by comparison. Fresh from the memory of handing the House to Democrats with their dogged pursuit of the Mark Foley “scandal” a mere six years earlier, the prospect of keeping the White House in Democratic hands would have been too much to ignore.

But of course the White House wasn’t in GOP hands, but rather in the hands of Barack Obama, the progressive Messiah. As such, other than Jake Tapper at ABC News, the story barely warranted mention other than to demonstrate that the Republicans were seeking to make a political mountain out of a tragic but unavoidable molehill. And don’t forget Candy Crowley actually running interference for the president during the debate…

The Constitution specifically protects the press because the Founding Fathers understood that to protect the Republic it was absolutely necessary for an unfettered press to have the freedom to pillory government actors for their misdeeds, otherwise it’s unlikely that government would ever be accountable to the citizenry. Unfortunately however that freedom can’t demand that a sycophantic press actually do their jobs when it’s one of their comrades in the White House. In that case it’s a little like an amendment saying 8 year olds must be allowed to eat spinach. It protects their right to do something they have no desire to do in the first place. Unfortunately for us, in this case the media’s adversity to spinach has ended up dealing a body blow to the country by inflicting another four years of Barack Obama on it. If we’re lucky maybe Popeye will decide to become a journalist during the next election. Even a fictional cartoon character would do a better job than the current crop of administration cheerleaders passing themselves off as journalists.