Last week the Bureau of Labor Statistics released a report that said that the labor force participation rate (LFPR) dropped to 63.6%, the lowest rate since Jimmy Carter was in office. Essentially that means that of the population of 16 year and older, 37.4% of them decided not to work or not to seek work. That’s 88.8 million people! To put that in perspective, when George Bush took office the LFPR was 67.2% and eight years later it was 1.5% lower at 65.7%. It has dropped 2.1% in Barack Obama’s first four years, the most precipitous drop in workforce participation since they started keeping records in 1948. But percentages only tell you so much. Each of those percentage points represents approximately 2.5 million people. Since Barack Obama became president over 5 million people have simply stopped trying to find a job. If just half of those 5 million people were still looking for jobs, the unemployment rate would actually be 9.4% rather than the official 7.8%. Now some of those are students who chose to go to college because they couldn’t find a job and others are senior citizens who’ve retired from the workforce, but the overwhelming majority of those 5 million are people who have simply given up hope. 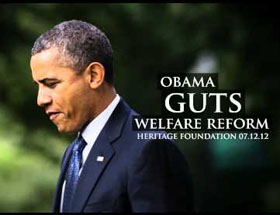 And that’s the point, and the problem… Not since the 1970’s have the American people felt so discouraged about the prospects for the nation in general and their individual economic circumstances in particular. For most of American history the notion of having a job, doing something productive for your family and your community was the norm. Barack Obama is seeking to rapidly change that, and he got a good head start during his first term. The President has doubled the number of people on food stamps and he gutted Bill Clinton’s (grudging) welfare reform. That’s his version of Supply Side Economics, he supplies the benefits and people will be happy to give him four more years. Add to this the regulatory nightmare he has unleashed on businesses and four years of demagoguing those who drive American productivity and you have an ever increasing number of Americans who believe they either can’t or don’t have to find jobs.

For much of the 20th century the United States was looked at as the place to come to seek your fortune, to make or do something with your life, basically where anything was possible. Although Hollywood and Coke and Levis brought the American Dream to the rest of the world, far more importantly, most Americans were pursuing it here at home, if not living it. Today something all together different is occurring. As the Gallop poll demonstrated, much diminished is that “Can do”
feeling that most Americans had for most of our history, the feeling
that prosperity and success were just around the corner and anyone could
achieve it if they worked hard enough.  America has become a state of dependence, where half the population pays no income taxes and where 40% of the population suckles at the public tit, either in the form of government handouts or as employees of a bloated bureaucracy.

How long can a population survive when fewer and fewer people are supporting an ever increasing population of non producers? Not long. Frances Fox Piven and Richard Cloward posited in 1966 that you could overload the welfare system in an effort to bring about a redistribution of wealth. If you read their manifesto, you can’t help but recognize their methods in Barack Obama’s policies.

While it’s impossible to know what the future holds, it’s not difficult to wonder what the situation of the country might be in 4 years if the same policies that brought us to where we are today were implemented during the president’s second term. 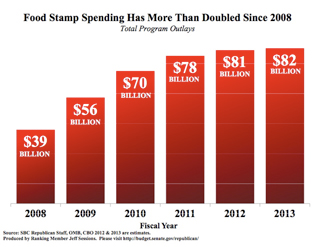 If Food Stamp growth were to decline to 25% (vs. 50% over the President’s first term) there will be 60 million Americans on the program. If Social Security Disability (which is at its highest level on record) increases by another 25% as it did in the last four years, a total of 13 million Americans will be on disability. (What’s most heart breaking about this programs is that the rampant fraud and bureaucratic incompetence are keeping benefits out of the hands of the truly needy.) Those measures alone would bring the total of people receiving government checks (i.e. money taken from taxpayers or borrowed that will have to be paid back by taxpayers) from 18% of our population today to almost 23%. Add in the 8 million or so people receiving unemployment benefits and the 4.4 million on welfare and you have over a quarter of the population on the receiving end of some wealth redistribution program. On the workforce side, if the LFPR declines another two percent it will sit at 61.6%, a level not seen since 1977. With a LFPR of 61.6% and an unemployment rate that stayed at today’s 7.9%, we would have only 141 million workers supporting a population of 323 million people verses today’s 144 million supporting a population of 313… That’s 3 million fewer workers supporting a population that would have grown by 10 million! Inverted pyramids like that don’t last for long.

At the end of the day, one has to wonder what exactly were those 65 million voters hoping for when they voted for Barack Obama? If it was more of the same they just might be in luck… at least in the short run. It appears that the President plans on doubling down on his policies. He appears to be executing the socialist Cloward Piven Strategy perfectly. While his devotees may be happy with his rhetoric today, they will likely not be happy when his grand strategy succeeds tomorrow. The problem with socialism in America is that it assumes a static nature of the citizenry, i.e. that government can impose whatever requirements on workers and producers and they will have no choice but to comply. Nothing could be farther from the truth. With countries from Australia to Canada to Singapore to Estonia to Denmark offering greater levels of economic freedom, those who fund what the government redistributes have many options available to them. Money, like water, flows to the areas of least resistance and the resistance is increasing in the United States. Eduardo Saverin, Tina Turner and a record number of other American citizens are making it clear that do indeed have options. Lots of companies do too. When all of the producers have finally left the country, all that will be left of Barack Obama’s redistributive state will be those who no longer know how to fend for themselves. Somehow I can’t imagine that being the Nirvana that Obama voters were thinking of.