How about letting members of the Fortune 500 run America's welfare programs?

Imagine what you could do with three quarters of a trillion dollars. You might buy a new house, maybe a new car and maybe even take a trip to Hawaii or Australia.

Seriously, what can $750 billion accomplish? Well, that all depends on who’s spending the money.

According to the Congressional Research Service the federal government spent $745 billion in 2011 on welfare payments.

That means that government took 20% of every dollar it extracted from citizen’s wallets (or borrowed on their behalf) and gave it to somebody else. Not in exchange for part of a system they have paid into like Social Security or Medicare, or earned such as veteran’s benefits, but simply because they, the recipients were deemed poor. What’s more, virtually every element of the welfare state has gone up by double digits over the last 3 years: Healthcare up 37%, cash aid up 12%, education (college) assistance up 57%, energy assistance up 67% and who knows how much “Obama phones” have grown. Those numbers are simply staggering. That welfare spending, when combined with the $300 billion states have to pay for federal programs, brings total welfare spending to $1.03 trillion, fully 7.5% of the American economy. 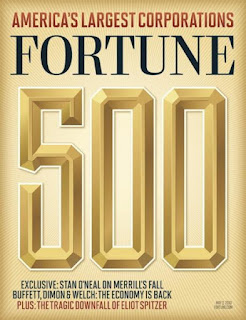 To put that spending in perspective, in 2011 the 500 companies that make up the Fortune 500 list earned a total of $825 billion in profit on revenues of $11.2 trillion for a profit margin of about 7%. (1/3 of that revenue came from outside the US)

It’s interesting to see what, in the right hands, upwards of ¾ of a trillion dollars can do.

Of course in the private sector it’s profits that drive the activity. Entrepreneurs often start companies because they’d like to make a profit doing what they love. Investors invest in companies because they believe the potential for profit outweighs the risk of losing their money. At its core profits are what drive a prosperous society.

So what did those 500 companies do to earn their $825 billion? They directly employed 17 million Americans and indirectly employed tens of millions more both in the United States and around the world. What’s more, they touched the lives of virtually every person in the country in one way or another: Utilities – PG&E and Georgia Power; cable TV – Cablevision and DirectTV; Food – Wal-Mart and McDonalds; Healthcare – HCA and Pfizer; Information – Google and TimeWarner; Entertainment – Disney and CBS; Insurance – State Farm and Aetna; Communication – Apple & ATT; Transportation – Ford and American Airlines.

The US revenue from these 500 companies represents about 50% of our GDP and improved the lives of virtually every man, woman and child in the country in the form of a paycheck or cheaper products or more efficient services or more effective treatments. They are the top performers in an economic system powered by innovation and experimentation and has generated unprecedented prosperity. All driven by $800 billion in profit…

Now contrast that with the government spending $745 billion. From food stamps to cell phones to housing assistance to healthcare, government spending on welfare programs have been growing for decades and have taken off like a rocket ship under the Obama administration. Surely with that much money spent the results must be phenomenal. With $20 trillion spent over the last half decade surely there must be no more poverty anywhere and no more hungry children. 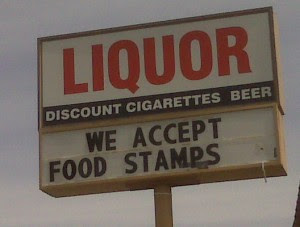 At the end of the day however, welfare is not supposed to be a profit driven endeavor. (Of course there’s nothing in the Constitution that gives the federal government the power to run a welfare program in the first place, but why quibble about technicalities…) The government created welfare programs were supposed to support those in difficult circumstances until they were able to get back on their feet. It, the welfare state, has been an abject failure for everyone involved, from the people whose money is taken to fund it to the recipients themselves, sometimes generations of them. This failure has been catastrophic, both in terms of the lives lived in misery or those not lived at all, as well as in terms of the loss of human capital in the pursuit of prosperity.

Is it not time to consider a model where the people who bring us everything from iPads to Velcro to overnight delivery to Big Macs are given a shot at solving the problem that government is simply incapable of solving? American private enterprise has driven the improvement of the human condition farther and faster than any economic system in the history of mankind. Is it not time to abandon the failed policies of the welfare state and allow the profit motive to attempt to solve a problem that apparently warrants the spending of a trillion dollars a year of taxpayer’s money on?

If not business per se, then private charities and churches. In his excellent new book “Who’s the Fairest of Them All? – The truth about opportunity, taxes and wealth in America” Stephen Moore discusses a study by Arthur Brooks that shows that private charitable dollars are far more effective in helping the poor than public programs. Moore states

“That is in part because private charity often requires some change in the behavior of the person receiving the aid, such as getting off drugs, working for the aid or helping others. Public charity almost never attaches these conditions”.

And that explains why government welfare programs have failed. They don’t require anything from anybody. Private enterprise succeeds because businesses require adapting to circumstances and markets to achieve the goals. Citizens should demand that we harness the innovative power of the private sector to attack a problem that government has been making worse for 50 years. While the country as a whole would benefit from the lower taxes, the bigger benefit would be achieved by those freed from the oppressive yoke of government dependency who would be able to share in the prosperity that has so long escaped them. Now that’s redistribution worth considering.