Barack Obama Jumps the Shark and Lands on the Wedding Cake 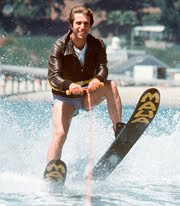 President Obama has jumped the shark. The phrase “Jumping the Shark” dates back to 1977 when the cast of the popular television show Happy Days took a trip out to Los Angeles and The Fonz, played by Henry Winkler, jumped over a shark cage while waterskiing. The original use indicated when a TV program had run out of creative and compelling storylines and began to utilize gimmicks to keep viewers interested such as trips to foreign countries, the introduction of new characters (particularly babies) or cameos by special guest stars. Over the last three decades the idiom has taken on a broader application in that it typically means the beginning of end of something, some endeavor, an erstwhile high flying company, or in this case, a career.

According to Gallop, Barack Obama’s approval rating is sitting at 46%, and the last time it was above 50% was May of 2011. To put that in some perspective, at this point in 2004 George Bush was sitting at 49% and had been at 60% as recently as that January, while Bill Clinton was sitting at 55% at this point in 1996. As bad as that approval rating is, Rasmussen has Obama 5 points behind Mitt Romney with a further 5% undecided. Dick Morris has a great way of explaining why that 5% is likely to go sharply against the President. He says being undecided at this point in the election cycle is the equivalent of asking if you think you are going to be married to your wife this time next year. If you don’t come down strongly in favor of yes, there’s a problem. As such he suggests that most of those undecided voters are going to go against the President.

So what does all this mean? That basically things are not looking good for Barack Obama in November. The economy seems to be mired in the cellar, the housing and unemployment numbers are looking bleak and the writing has been on the wall for months about this week’s Obamacare decision. It is said that in times of adversity a person’s true character comes to light. Over the last few months Barack Obama has proved that adage true.

So what is a politician to do when their political career is hurtling towards the abyss? Use the political equivalent of gimmicks to resuscitate their campaign. In the case of President Obama, that means doing things that will energize his base, regardless of their constitutionality or their probity. Take for example the White House’s use of the left’s thuggish tactics to intimidate private citizens for exercising their First Amendment rights and using the Office of the President to suggest that individuals are somehow “Betting against America” simply for supporting Mitt Romney.

Then of course there is the President’s recent foray into law making that is unencumbered by constitutional authority. According to Article II, Section 3 of the Constitution, the President is directed to “take Care that the Laws be faithfully executed.” On the 15th of this month President Obama decided rather than do as directed by the Constitution, he would implement his own extra constitutional version of “The Dream Act”, a bill that Congress couldn’t pass, even when the Democrats had a supermajority.

And it’s not just in amnesty where the President is throwing out the Constitution. In February, the Justice Department announced that they would no longer defend the Defense of Marriage Act in court, unilaterally declaring it “unconstitutional”. This might have come as something of a surprise to those who had witnessed the Administration defending DOMA in court only the previous month!

Now of course we have President Obama contradicting Senator Obama and deciding that Executive Privilege is a good thing, given the fact that he and Eric Holder have much to hide in reference to government weapon sales that have resulted in the deaths of 300 Mexicans and one American Border Patrol agent… in Arizona!

These acts, controversial one and all, are the acts of a desperate man. Not a single one of them was necessary to run the country. They were however necessary to a campaign is flailing about seeking to energize its base as it tries to combat its rapidly crumbling appeal to Middle America.

As disgraceful as much of this conduct is, none of it really fits the level of incredulity necessary to be deemed “Jumping the Shark”. This however does:

Got a birthday, anniversary, or wedding coming up?

Let your friends know how important this election is to you—register with Obama 2012, and ask for a donation in lieu of a gift. It’s a great way to support the President on your big day. Plus, it’s a gift that we can all appreciate—and goes a lot further than a gravy bowl. 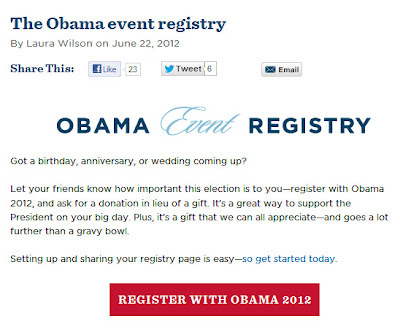 That’s right… The President of the United States is requesting that citizens give up birthday and anniversary presents along with wedding gifts so that he can raise money for his campaign!

The Fonz jumping over a shark was more believable than this: The President of the United State asking a couple, on the most important day of their lives, to add a third figure to the top of their wedding cake… him! And he’s not even planning on making an appearance at the reception, nevermind sit through the wedding itself! Maybe those planning a 2013 wedding should move it up a year just to guarantee a victory…

To paraphrase Winston Churchill – obviously a favorite of President Obama – “Never have so many been asked to give so much to one man”. Yes we can!