Way back in 2007 crony capitalism was a bad thing. For years the left had been telling anyone who would listen that the Bush administration was in bed with the oil industry and that Haliburton was given preferential treatment because of its friends in the White House and as a result ended up bilking the government out of millions if not billions of dollars.

As a result, candidate Obama declared “I’ll make our government open and transparent”, “meetings where laws are written will be more open”, and then President Obama, on his third day in office, stated: The way to make government responsible is to hold it accountable. And the way to make government accountable is to make it transparent. Gone would be cronyism, inside dealing, opaque transactions, and what’s more, citizens would have five days to read every bill that landed on the President’s desk before he would sign it.

The whole “five days” deal didn’t last long, and neither did much else in Barack Obama’s promise of bringing government transparency to new heights. What’s worse, the violations of that transparency pledge were greatest during the passage of arguably the single most important – and worst – piece of legislation ever to come across a President’s desk: ObamaCare. Euphemistically named the Patient Protection and Affordable Care Act, ObamaCare single handedly would open the door for regulation of anything in the American economy and the lives of the American people. The legislation inspired protests that have not been seen in decades. Needless to say, ObamaCare was and is controversial.

So it’s particularly interesting that Barack Obama chose that legislation to introduce some of his most potent behind the scenes dealings. Although it was known at the time that the administration was discussing the various elements of ObamaCare with Big Pharma, it wasn’t until three years later that the hypocritical interworkings of the negotiations would became public. In typical Washington fashion, the President traded (dropped) legalizing the importation of drugs from Canada and using government purchasing power to drive down drug prices in exchange for the pharmaceutical industry spending tens of millions of dollars in support of ObamaCare. The point here isn’t that the President engaged in anything particularly unusual, but rather his hypocrisy in explicitly promising an unprecedented level of transparency and then to immediately engage in secret deal making upon taking office.

Earlier this year, in an astonishing demonstration of the President’s disdain for the notion of truth in advertising, the Obama administration has decided to eliminate the single best tool taxpayers have for keeping an eye on where Washington is spending their tax dollars – as well as those borrowed from China – the Census Bureau’s Consolidated Federal Funds Report, and replace it with a variety of opaque reports that will make much more difficult to take an accurate accounting of government spending. And coincidentally this just happens to occur at the very moment when the government is spending more money on more obscure projects than at any time in US history. So much for the “most transparent administration” in history.

And unfortunately, it’s not just the transparency… (although there’s lots more on that, like the administration’s abysmal record on FOIA). The Obama administration is also hotbed of cronyism. When the stimulus bill passed President Obama said: “Let me repeat that: decisions about how recovery money will be spent will be based on the merits. They will not be made as a way of doing favors for lobbyists.” Skip ahead three years and, surprise, surprise, it turns out that the President might not have been entirely truthful. 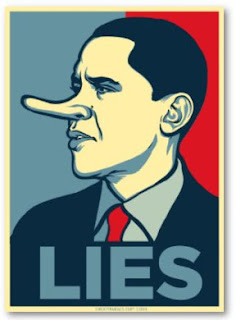 Fully 80% of the $20 billion the Energy Department spent or guaranteed in the green energy sector during the first three years of the Obama Administration went to Obama donors, campaign bundlers or donors to the Democratic Party. Then there is the union payback via the nationalization of the auto industry. Or the administration’s attempts to get a general to perjure himself in support the Obama donor backed, and now bankrupt LightSquared. And who can forget the Navy paying $16 a gallon for “biofuel” from a company being advised by an Obama transition team member.

One could go for pages with this stuff, but why bother? One of the primary drivers behind “Hope and Change” was the promise that the Obama administration was going to usher in a new era of government transparency, accountability and an even handed administration of government operations. Three years later those illusions have been pierced and as Mr. Perpetual Fundraiser begins to send his already turbo charged campaign into overdrive, it might be helpful to remember that old joke: “How can you tell when a lawyer is lying? His lips are moving.”