If Obama can claim credit for killing bin Laden a year ago, why can't he take credit for the economy today?

As President Obama and his administration are constantly telling us, the horrible economy is not his fault because he inherited the “Worst recession since the Great Depression”. One can certainly make that argument. You just can’t get it to stick.

If you could however, what you’d basically be saying is that that 3 ½ years after taking office the President of the United States is essentially helpless to impact the economy. “No, no, no!” his supporters would no doubt respond: “That’s not what we mean! The entire economy, nay the entire world’s economic system would have collapsed if President Obama had not saved us.” That’s simply a 2012 version of the absurd and decidedly non-empirical “Jobs created or saved” measure the administration proffered when it became obvious that their stimulus was a failure. 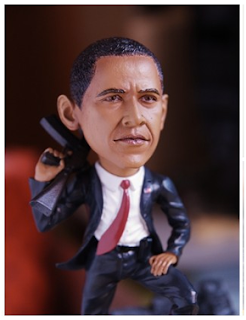 If the President is not responsible for the economy after three years in office, what are we to make of his taking credit for the killing of Osama bin Laden after just two? The financial meltdown began in 2007 and by 2009 we were officially out of the recession. Yet key pieces of intelligence that led to the CIA eventually locating bin Laden were discovered even earlier, in 2005 and 2007. In addition, critical to the success of the intelligence gathering process was information garnered from Khalid Shaikh Mohammed using the very “enhanced interrogation” techniques candidate Obama objected to.

As Obama seeks a second term so that he can begin to fix the economy, Vice President Biden is there to tell voters the only things they really need to know about the President’s first term: “bin Laden is dead and General Motors is alive”. The President apparently wants to take “credit” for GM as well, despite the fact that the ill advised rescue of the UAW… er… of GM began under President Bush also. But the bottom line is that General Motors is alive, has paid back its loans, and is profitable. Alive, like so many things with this administration, is a relative thing. Yes, GM did pay back its government loans, but the money used to do so came from… other government loans. And yes, the company is currently profitable, but that is in no small part because it received $45 billion in special tax benefits not typically available to companies emerging from bankruptcy. (I’d venture to guess that even the hapless Solyndra might eke out a “profit” if given tens of billions in loans and a $45 billion write off.) The lesson for America from GM and the administration is that it’s OK if a company doesn’t pay taxes so long as its union members get paid. 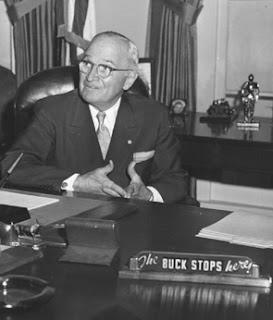 As we look forward to an exciting run up to the November election, the question is, how is it that a President seeking a second four year term isn’t responsible for the economy 3 ½ years after taking office, but somehow is supposed to be given credit for killing bin Laden a year earlier? Has the Presidency been reduced to a cafeteria plan where the man sitting in the Oval Office gets to pick and choose the issues for which he wants to be held responsible? Does the fact that he takes credit for something mean that we have to agree with his assessment? What about the things he demurs to take credit for? Are we forced to blame them on President Bush or can we pick any scapegoat?

Harry Truman famously had a sign that sat at the edge of his desk in the Oval Office that read “The Buck Stops Here”, in reference to which he once told Naval War College audience: “The President–whoever he is–has to decide. He can’t pass the buck to anybody. No one else can do the deciding for him. That’s his job.” I’m not sure what kind of a sign is sitting on Barack Obama’s desk, but I wouldn’t be surprised if it weren’t similar to that contemptuous sign you find posted on desks and doors of bureaucrats all across the country: “A lack of planning on your part doesn’t constitute an emergency on my part.” Only in President Obama’s case it reads: “A lack of economic opportunity on your part doesn’t constitute failure on my part.”