Why Barack Obama doesn't care that you're paying $5 a gallon for gasoline. 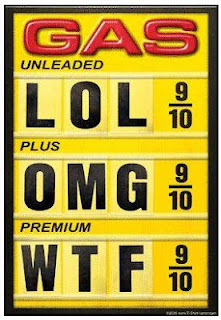 Because he doesn’t pay for gasoline of course. But that’s not it.

Despite his protestations to the contrary, Barack Obama thinks you’re stupid. Gasoline prices are 90% higher today than they were when he took office and he wants you to think he has nothing to do with it. At the same time however he wants you to give him credit for the fact that imports make up the lowest percentage of US energy usage in years.

The President reminds me of the “Magic Grits” scene from My Cousin Vinny; where perhaps the laws of economics cease to exist on Obama’s watch. Unfortunately for America, they don’t.

It is accurate that American energy imports are down and production is up since Obama took office. Contrary to the President’s spin however, it’s in spite of his actions, not because of them. Last year oil production on state and private land (where the feds have less influence) was up by 14% and 12% respectively. On federal lands, you know, the ones that President Obama controls… down 11%. At the same time, during the last quarter of 2011, permitting for drilling in the Gulf fell off a cliff. Then of course there is the languishing economy that reduces demand for oil in the first place. Not to mention a mild winter and a surge of natural gas production, that is, again, overwhelmingly on private land. Add those things up and you simply have less demand overall and a smaller need for foreign oil 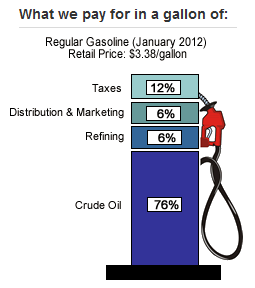 Now to gas prices. The single biggest factor in the price of gasoline in the United States is the cost of oil. Oil is denominated in dollars which means that when you print lots more money – as the fed has been doing with Obama cheerleading – the price of stuff denominated in dollars tends to increase. Then there is the unrest in the Middle East, a Saudi production cut and the increasing (but ever more slowly) demand from China and India. Why do these things matter? Because all of these factors tend to drive up the price of crude oil, and crude makes up about 76% of the price of a gallon of gasoline today, up from a historic average closer to 65%.

So back to the President. It’s higher oil prices that translate into higher gasoline prices – as opposed to the price gouging by Big Oil which is what the President would have you believe. Enraged, the President tells us he’s been working to bring down gas prices. How? His answer is to reduce demand for gasoline by pouring billions of taxpayer dollars into green energy boondoggles while simultaneously putting the brakes on exploration and development on federal lands. Oddly that strategy hasn’t worked. Prices are the highest they’ve ever been at this time of the year. Is it possible that our 4th best president failed Econ 101 and that this is all just a terrible mistake? Actually no. Just listen to candidate Obama from January 2008: “Under my plan, electricity rates would necessarily skyrocket”. So, it turns out he actually does know what he’s doing, only right now he’s doing it with gasoline. He’ll have you driving an electric brick within five years if it’s the last thing he does! 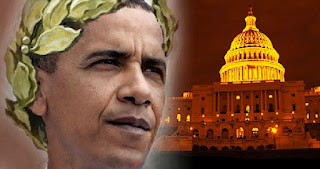 Five dollar a gallon gasoline is the result of Barack Obama’s desire to have the American people foot the bill for his gullibility in the face of the global warming hoax. That is a key element in his long term goal: To join the likes of Alexander the Great, Julius Caesar, Napoleon, George Washington and others in the pantheon of great men on the stage of history. Not sure? Remember this: “This was the moment when the rise of the oceans began to slow and our planet began to heal”?

Of course the price you pay for his grandiosity is found in much more than just gasoline. Oil and energy play a role in virtually every aspect of the economy, from food to transportation to chemicals and virtually everything else, like stuff packaged in plastic, products made out of metal, commodities that need to be excavated or buildings that need to be heated. It may not be easy to see, but the price of oil and gasoline impact everything in the economy. As a result, just when consumers need a little more money in their pocket to spend, inflation is inching back up. Believe it or not, that’s just fine with President Obama.

Unfortunately the electoral math is pretty simple. Fifty percent of Americans pay no income taxes. There are 2.1 million federal employees who love the fact that they earn average salary and benefits of $123,000 per year, double the civilian workforce. There are 14 million state and local employees, half of whom are teachers and many of whom are in unions making more than their civilian counterparts. None of these constituencies are particularly interested in getting rid of Barack Obama and potentially destabilizing their gravy trains. Add to that the fact that blacks (who make up 12% of the population) tend to vote Democrat at a 9 to 1 or more ratio regardless of the consequences and the idea that $5 gasoline will somehow undo Barack Obama is pretty hard to imagine.

The reality is that Barack Obama doesn’t need to get rid of $5 gasoline to become reelected. He simply needs to use it as a foil with which to pillory his opponents and demagogue corporate profits. At the end of the day $5 gasoline is not a net negative for Barack Obama. It allows him to play the populist advocate who is seeking to break the stranglehold big business in general and Big Oil in particular have on the American people. Populist messages sell, particularly to those who are warm and comfy in the swaddling clothes of government largess and who don’t want to be forced to stand up and venture out in the world and actually take care of themselves.