Back in 2000 or 2001 I read a piece in Newsweek or TIME that discussed flyers whining that they didn’t have enough storage space in the overhead compartment bins on airplanes. I remember writing a letter to the editor saying that the only reason that people had the luxury of being able to whine about such things was that flying had become so safe that flyers could shift their focus to the more mundane. Then of course September 11th came along and people started focusing on the basic reason planes exist… to get them from point A to point B in one piece. 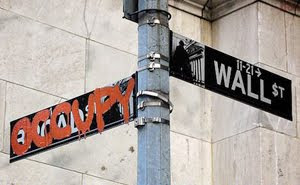 The Occupy Wall Streeters are just like the people whining about the overhead compartments. These are the people who enjoy the fruits of the capitalist system in which they live – iPhones, Starbucks, Facebook, Twitter, Twinkies, Nikes, ATMs, MSNBC, not to mention adequate food, shelter, and transportation, yet want to destroy that very system. They vote for economic dolts in the Democrat party like Barney Frank, Nancy Pelosi and Barack Obama and then blame capitalism when they screw it up.

Not only do they have no clarity about what they want, but they are wrong about most of those claims they are making. Bankers may be SOBs, but they didn’t cause the financial meltdown, Congress did. Their college loans are so heavy because government drove up college costs faster even than the rise in health care costs, not because of the 1%. The fact that with degrees in hand they can’t find jobs is because of government regulation and tax policy, not because of big corporations.

These people could benefit from putting down their copy of Das Kapital and ask their local banker for his copy of the Forbes 400.

The annual Forbes 400 issue lists the 400 richest people in the United States, the uber 1-percenters if you will. Just to make it on the list this year you had to have a net worth of slightly over $1 billion. Strangely, this list of the most hated of the really hated 1%, includes stars in the Democratic constellation like George Soros sitting at number 7 with a net worth of $22 billion and Mark Zuckerberg, Sergey Brin and Larry Page sitting at positions 14-16. Oh, and of course there’s also Mr. Solyndra, George Kaiser, at # 31 with $10 billion and President Clinton’s buddy, Ron Burkle, at 107 with his $3.2 billion. 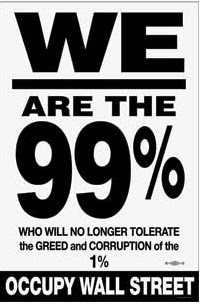 When you hear the Occupiers talk about the 1%, it brings to mind a banker or industrialist sitting in his office gleefully writing pink slips just before Christmas so that he can improve the bottom line and buy another Gulfstream with his bonus money. Of course at the same time he’ll find some loopholes through which he can avoid paying any taxes on the bonus he earned for firing all of those workers. As he walks to the limousine that takes him to his Connecticut estate each night, he doesn’t even deign to make eye contact with the passing workers upon whose backs his fortune was made, at least the part that wasn’t left to him by his father and grandfather.

It’s of course possible that that caricature could be found amongst the people who make up the Forbes 400. That, however, is not the story of the list. What is the single most important thing about the list? The fact that 278 of them are self made. Think about that. While you’ll still find a Rockefeller and a Ford on the list, 70% of the richest of the rich in the United States are self made. That doesn’t mean that all of them were born into poverty like Oprah Winfrey or started selling shoes out of the trunk of their cars like Phil Knight, but 278 of the 400 started out in families that would never have made it anywhere near this list.

And the question is, how did those people make their money? Did they steal it from hard working Americans in some dark alley somewhere? No. Did they set up a high tech printing press and start forging bearer bonds? No. Did they use the police power of the state to jail competitors and take their money? No. Most of those people made their money the old fashioned American way, they earned it. They figured out how to provide a good or service to Americans and people around the world at a price they were willing to exchange their money for.

Obviously, if you listen to the Occupiers, all of those services must have been in banking, where the little guy has no alternative but to put their money in Wall Street banks. Not quite true. While 95 of the 400 made their fortunes in finance of one sort or another, there is a wide spectrum of other areas from which the fortunes came…

The members of the Forbes 400 made their fortunes by giving consumers, businesses and governments goods or services they were willing, if not happy, to pay for. They delivered food to stores and pizza to homes, they made shoes, software and toys, they built roads, bridges and buildings, and they entertained with movies, music and video games. And the funny thing about those 400 people is that they are only a fraction of the entrepreneurs and businesspeople in the United States who are providing those services. There are 22 million small businesses in the United States headed by people who are trying to become successful enough to make that exclusive club, and virtually every one of them understands that the way to get there is to provide customers with sufficient value to convince them to willingly exchange their hard earned dollars for their particular good or service.

The existence of guys like Bernie Madoff, Dennis Kozlowski or Kenneth Lay in no way diminishes the benefits that Americans (and people around the world) have enjoyed as a result of the efforts of the people in the Forbes 400 or the hated 1%. They may have been thieves and con artists, but none of them did a fraction of the damage done by Franklin Raines, Jamie Gorelick or Chris Dodd.

The question of the day is, would you rather have unaccountable bureaucrats and politicians using the police power of the government to decide the fate of the economy or would you rather let companies and entrepreneurs compete for your interest and money in a free market? While the Occupiers and their union and Democrat comrades would prefer the former, I’d take the latter 10 times out of 10. Things might not work perfectly, but they’d certainly work far better than if they were run by government apparatchiks.

Why the Liberal Media Won't Be Able to Use the Horrific Buffalo Shooting to Smear Conservatives
Townhall
Seattle high school claims that 80 percent of its students identify as LGBTQ+, non-binary, or transgender
Twitchy
Tucker Carlson Responds to Charges He Inspired Buffalo Shooter, Makes His Critics Look Like Childish Ghouls
Redstate
Put a Fork in Portland
PJ Media