Legacy: Was Steve Jobs a selfish son of a bitch? 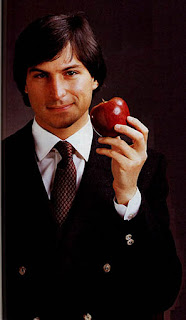 Steve Jobs passed away earlier this month with an estimated fortune of $8 billion. I have yet to see a single report about one single dollar that he gave away to charity. How is it possible that a person who was lucky enough to be born and grow up in the United States and take advantage of our laws, schools, infrastructure and patent protections could be so selfish? Compare his lack of philanthropic giving with that of other similarly rich types, past and present. Andrew Carnegie gave away virtually his entire fortune, over $350 million dollars during his lifetime – $5 billion in today’s dollars. John D. Rockefeller gave away over half a billion dollars over his lifetime – $8 billion in today’s dollars. Bill Gates has given away over $30 billion dollars and promised to give away most of the rest of his fortune while his friend Warren Buffett has promised to donate 99% of his wealth. The pair has created The Giving Pledge where billionaires pledge to donate a significant amount of their fortunes to charity. If all of these people can give this amount away, what was wrong with Jobs?

Charity and private giving has been a great force in America since its founding. Through churches and local organizations for those of modest means to building libraries, museums, or foundations for the wealthy, America has been a country where the successful and struggling alike look to support their communities as well as support the less fortunate around the world.

Apparently not so for Steve Jobs however… and charity’s not the only place he was tight. When he was alive he did everything he could to reduce his taxes. He used tax shelters to lower his tax rate from 35% to around 15% on millions. He put his real estate and other assets in trusts so they would escape the death tax.

Everywhere you look Steve Jobs was doing what he could to keep his own money. Not giving it away. Avoiding paying taxes. All while he’s taking advantage of everything America has to offer.

What’s wrong with a person who sees the misery going on around the world, from hunger in Africa to millions of poor here and does nothing to lend a hand? What kind of legacy is that?

When the robber baron Andrew Carnegie died his legacy was obvious. He had built thousands of libraries around the world, founded a university and built Carnegie Hall. By the time he died, JD Rockefeller had remade the face of modern medicine and created what was for years the largest charitable foundation in the world. Bill Gates is still very much alive, and he is remaking the face of charity. What kind of legacy is Steve Jobs leaving?

In 1977 he and Steve Wozniak introduced the Apple II, the first fully assembled personal computer. At the time the notion of a personal computer was an utterly foreign concept to 99.9% of the people on the planet. Term papers were still being written on typewriters. Math was still being done on calculators. Research was still done at the library.

In 1984 Apple introduced the Mac, the first personal computer to feature a mouse and graphic user interface. At the time most others still used the C: prompt.

In 1986 when he purchased Pixar, it was primarily a high-end computer hardware company with graphics as a side note.

In 2001 when Apple introduced the iPod, digital music was just becoming popular but most digital players were “big and clunky or small and useless”.

In 2003 when Apple introduced the iTunes Store the music industry was imploding and college students were being sued in their dorms.

In 2007 when Apple introduced the iPhone few people were able to surf the Internet on their phone and most competitors’ products were poorly designed and performed similarly.

In 2010 when Apple introduced the iPad, it essentially created the market, selling 5 times more than the rest of the devices combined.

Looking at all of this, the question to ask is, is Steve Job’s legacy going to be that he didn’t care about other people because he didn’t give his money away or let the government take it? Or is it going to be the fact that he changed the world and gave people something that is far more precious than money… more of their own time.

If you didn’t have a computer, how many hours a day would you have to spend (or would you have spent) in front of a typewriter typing, retyping or whiting out errors as you wrote a paper for class? Or doing computations with paper, pencil and a TI calculator? How much less efficient would your job be? Steve Jobs began and led the march that made the personal computer such an integral part of our lives, both personally and professionally. The value of that contribution to the improvement in the human condition is measured in the tens of trillions of hours and dollars rather than millions or billions. Add to that the value of the entertainment provided by iTunes & Pixar and the efficiency provided by the combination of mobility & functionality embodied in the iPhone and iPad and there are hundreds of billions more hours and dollars.

I never met Steve Jobs and from what I read he could be both generous and an SOB to those who knew or worked for him. Regardless of his personality or lack of a philanthropic gene, the fact of the matter is that he did far more for the world by running his business – and keeping the money generated from doing so – than he ever could have if he had “given back” every penny he ever earned or let the government tax him at the highest possible rate.

What might have become of Steve Jobs if today’s kleptocracy and regulatory straitjacket had kept him from starting his business in his parent’s garage with $1,200? Given that his return to Apple was driven by stock options and performance incentives, would he have returned if the “Occupy Wall Street” types had been setting tax policy? Or would he have decided to retire and travel the world?

We can’t know the answer, but we do know is that Steve Jobs created far more value for the world than he received in return. If he wanted to keep every single penny of it the world was still far better off. That’s how private enterprise works. It’s an exchange of ideas or products or services that others are willing to pay money for. In the end, although successful entrepreneurs and businessmen may indeed earn millions or billions, in almost all cases they do so by having provided customers or clients many times that in value. If you think Jobs was the only one, think about how much YouTube and Facebook have changed your life over the last five years. The founders of both are billionaires but the value of the benefits to the millions of ordinary citizens is many times that.

If the people at OWS or in the kleptomaniac ridden Democratic Party really wanted to jumpstart the economy and drive prosperity all they need to do is look at Steve Job’s life and give as many people as possible the opportunity to follow his path. Reduce taxes and regulations and just watch and see how many would-be Steve Jobs types come out of the woodwork.

Selfish son of a bitch? Don’t know. Doesn’t matter. A model for prosperity and improving the human condition… now that’s a legacy worth leaving.