What does it say about the United States when a Russian president sounds more like a capitalist than the American president?

In preparing for the 2012 election campaign the President said the following: “The proposition that the government is always right is manifested either in corruption or benefits to ‘preferred’ companies.” He went on: The “economy ought to be dominated by private businesses and private investors. The government must protect the choice and property of those who willingly risk their money and reputation.” Also: “Corruption, hostility to investment, excessive government role in the economy and the excessive centralization of power are the taxes on the future that we must and will scrap.”

Hallelujah! After three years of statist rhetoric a President who understands that it is free markets that create economic prosperity. 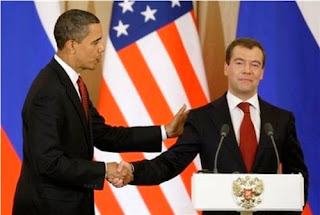 Unfortunately however the president speaking was not President Obama, but rather Russia’s President Medvedev. What has become of the world when a Russian president is making a stronger case for free markets than a sitting American President? Is the world standing on its head? Should we now expect the Chinese to declare Falun Gong as the national religion and announce free and fair elections?

As depressing as having a President who’s less of a free market fan than his Russian counterpart is, he’s only the tip of the iceberg. President Obama has plenty of progressive company across the country who fail to understand that freedom and economic prosperity go hand in hand.

And freedom is beginning to exit stage left… Not sure about that? The National Labor Relations Board went to court this week seeking to give unions the power to decide where private companies can invest their money; San Francisco is trying to ban circumcision, and some Chicago schools actually ban students from bringing their own lunches from home.

In a less anecdotal appraisal of our freedoms, the Mercatus Center at George Mason University just released the 2011 edition of its Freedom in the 50 States – An Index of Personal and Economic Freedom. The rankings take into account 150 different measures of freedom compiled into four main measures: Fiscal Policy, Regulatory Policy, Economic Freedom and Personal Freedom. Together they give an overall picture of a citizen’s level of freedom on things like the ease of starting a business, overall tax burden, gun laws and a wide variety of other measures.

I would venture to say that most people are not surprised by these rankings. The notion of freedom to do just about anything you want in places like New Hampshire and Idaho are about as strong as the recognition that California and New York are busybody states that seem to want to regulate everything.

I thought it would be interesting to look at the correlation between freedom in general and economic prosperity in particular. My hypothesis was that the states high in freedom would be significantly more robust economically. I was surprised to discover that on my first datapoint – income level growth – that was not the case. From 2005 – 2009 household income for the five least free states grew faster than income growth by the most free in 3 of the 5 years. And their incomes were higher.

On taxes the story is pretty much the same. Every single year from 2005-2009 the average tax rate was lower in the most free states than in the least free states, with an overall average of 8.6% vs. 10.8%.

What about cost of living? In ranking the states from 1-50 with one being the least expensive state to live in and 50 being the most expensive, there are no big surprises. The most free states averaged a score of 15 while the least free states hovered near the bottom with an average of 45.

It almost seems like it might be a wash with a slight tilt towards the free states… until you look a bit deeper. Why did income grow more in the least free states? Well, it turns out that that difference in growth is not that hard to find… it’s from their state governments’ deficit spending. During 2009 the five least free states ran an average deficit of $11 billion each while the five most free states averaged $494 million each. During 2010 the numbers were even greater, $17 billion vs. $828 million. In both cases the billions of dollars in deficit spending of the least free states was more than responsible for the disparity in income growth rates. So, not only do the citizens of the least free states pay higher taxes, suffer greater unemployment, experience a higher cost of living, it turns out the one measure where they were ahead of the game is a mirage created by a government shell game that leaves them with tens of billions of debt on their backs.

Dmitry Medvedev seems to have come to the realization that freedom and economic prosperity go hand in hand. If he ends up losing the 2012 presidential race to Vladimir Putin (who’s not known for his capitalist or freedom sentiments) perhaps he can start a second career here in the United States teaching President Obama and the rest of the progressives how to bring an economy back to life…