The day before Bin Laden was killed I did a small presentation at an Americans for Prosperity event in Jasper, GA. The highlight of the event was the keynote speech by Dinesh D’Souza. The thrust of his argument, taken from his book “The Roots of Obama’s Rage”, is essentially that while most traditional Democrats seek to effect redistribution within America, Obama, pursuing the anti-colonialist agenda of his father, seeks to have the United States diminished among the countries of the world. Companion to that weakening of the United States internationally is the weakening of the country economically. One example D’Souza discussed was Obama cheering oil exploration internationally while simultaneously making it more difficult and more expensive for companies explore and drill domestically.

The hypothesis D’Souza was proffering seemed particularly congruous when explaining Obama’s baffling movements (or lack thereof…) in the Middle East. Egypt was headed by arguably one of the most pro-American leaders (in a relative sense) in the Arab world, so Mubarak had to go. In Libya, Gaddafi had ostensibly stopped funding terrorists, paid compensation to the families of the Lockerbie bombing and gave evidence against AQ Khan. At a minimum he was not causing significant trouble for the United States, therefore he too had to go, and American firepower was sent to help… albeit under a Canadian commander. In Iran on the other hand, a country shepherded by a lunatic bent on getting a nuclear weapon who openly taunts the United States while funding terrorists across the region, participants in the Green Revolution barely received a nod from President Obama. Similarly, Syria, headed by a regime with a long history of supporting terrorism and massacring its own people, gets a new US Ambassador under President Obama. When Assad unleashes snipers to kill hundreds of protesters in the streets, hardly a whimper out of the Obama Administration.

I couldn’t help but recognize that D’Souza’s narrative seemed to fit perfectly with the quandary that Barack Obama presents. The quandary I’m referring to presents itself when one is asked the question: “Do you think Barack Obama is anti-American?” The facts might suggest that the answer yes, but the fundamental notion that American’s had willingly elected someone who is anti-American to lead the nation seems inconceivable. Nonetheless, despite the seeming incomprehensibility of the idea, and despite doing what was required in Abbottabad, that seems to be where we find ourselves.

How this happened is not as difficult as it might initially seem. As Bruce Bawer suggests, in reference to the Three Cups of Tea story, sometimes people want to be fooled. Sometimes in politics it’s not even necessary to fool people to get them to drive off a cliff. When 50% of the population pays no income taxes and Barack Obama talked about increasing taxes on “millionaires” to support more social programs for that same 50%… it doesn’t take much fooling. When environmentalists, for whom economics and real world failures are of no consequence, heard Obama laud “Green Jobs” and pillory oil companies and the coal industry, there was not a lot of fooling necessary. When idealistic young students, protected from the grown up world and relaxing on their bucolic college campuses heard Obama talk about getting their fair share and creating good jobs for everyone, once again fooling them was not even necessary. Add that to a black population that votes 90% Democrat, government unions that can exceed even that 90% and a pliant media that was derelict in it’s fundamental duty and there was not a great deal of fooling necessary for Barack Obama to win in 2008.

These demographics and mindsets have not shifted. Indeed, in some cases they have gotten worse as there are now more people receiving government checks than at any point in our history. For conservatives, libertarians, Republicans and anyone else who wants the United States to continue to be the beacon of freedom and the economic engine for the world, this presents a significant challenge. D’Souza is right when he states that 2012 will be all about Obama. The challenge however is twofold. On the one hand the GOP must field a credible candidate. While I like Sarah Palin, I don’t know if she has a plan for winning the messaging war she will no doubt find herself in. There are of course others, from Pawlenty to Bachman to Cain. Any one would be a far superior President than Barack Obama.

Regardless of who the candidate is, the more consequential challenge rests with actually making the election about Obama. John McCain refused to address much of Obama’s background nor would he allow anyone on 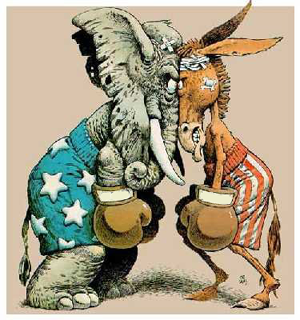 his staff do so. That was the fatal error for his campaign. In 2012 the GOP cannot allow that dereliction of duty to recur. In order to win against the tide that will be pushing for four more years of “Hope and Change“, the GOP must recognize that it’s in a cage match to the death. It must highlight every single aspect of the Obama presidency that demonstrates his desire to destroy what has made this country great. The most difficult part of that will be the education of voters on exactly what Obama’s doing, what are the consequences of those actions, and why they are bad for America. It’s easy for the President to talk about growing jobs and investing in America, but explaining how virtually everything his administration does has just the opposite effect is a more complex discussion. It’s easy for the President to talk about rebuilding alliances around the world but demonstrating the reality that his policies are in fact harming our international relationships is not exactly sound bite material. The President saying that he respects the Constitution takes no effort at all but demonstrating how his policies eviscerate it can’t be done simply or quickly.

At the end of the day D’Souza is right, 2012 is indeed all about Obama. Regardless of who the GOP nominates, the only way victory will come is if the party figures out how to reach out to voters and clearly articulate how Barack Obama is doing exactly what he told us he was going to do “Fundamentally transforming the United States of America” and how that is a very bad thing. The examples of such are legion from Green Jobs Czar Van Jones to the incoherence in the Middle East to GM to ObamaCare to the FCC, the EPA, the NLRB and many more. In this environment, if the GOP can’t figure out how to connect with enough American voters to forcefully retire Obama, then perhaps the GOP needs to be retired.