The Prosperity Ratio: Why we should encourage tax cuts for the rich...

One of the easiest ways to recognize a liberal is their refusal to accept that the universe is dynamic rather than static. The most obvious example of this is their 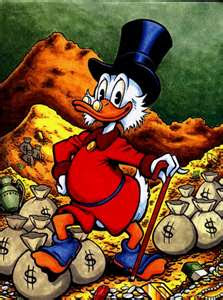 perpetual inability (or unwillingness) to grasp the notion that increasing taxes and growing regulations impact taxpayer behavior. This can be seen in on a number of levels. On the state level it can be seen by companies and wage earners fleeing high tax locales for those with low taxes or no income taxes. Rush Limbaugh famously left New York two years ago for the zero income tax comfort of sunny Florida. Then Governor Paterson responded by demonstrating his state’s disdain for the people who actually fund New York’s nanny state spending: “If I knew that would be the result, I would’ve thought about (raising) the taxes earlier.” And New York is not alone… New Jersey, Maryland and many others have also seen taxpayers flee their states in recent years.

California too is befuddled by the exodus of taxpayers from the progressive Nirvana Democrats have been creating there over the last 40 years. In 2010 an average of 3.9 companies a week moved their operations out of California due to high taxes and burdensome regulations. During the first four months of 2011 that number increased 25% to 4.7 companies leaving per week… and taking their jobs with them! What is the destination of choice for those companies? Not surprisingly, Texas, with its minimalist regulation mentality and no income or capital gains taxes. California officials were so flummoxed by the exodus that a delegation of (mostly Republican) legislators and Democrat Lt. Gov. Gavin Newsom went to Texas to talk with erstwhile California companies about why they had left the not so Golden State.

Again, not surprisingly, the answer was obvious… High taxes and burdensome regulation. For decades California socialists in Democrat clothing assumed Golden State economics were static and that they could simply raise taxes or increase regulation and employers would simply suck it up. Of course they were wrong, but they (and California’s voters) have yet to figure that out.

At the federal level, Barack Obama is the lead siren singing the “Tax the rich” song, ostensibly to try and shore up Uncle Sam’s finances. Last week the President said: “I believe that we can’t ask everybody to sacrifice and then tell the wealthiest among us, well, you can just relax and go count your money…”

In an environment where fully 47% of the people in the country pay either zero income taxes or actually get “rebates” for taxes they didn’t pay, Obama and the Democrats want to hike taxes on the people who actually choose to put their capital at risk and produce the jobs that fuel the economy. And like all good Democrats, they feel like they can simply raise taxes and the rich will automatically fall in line and fork over more money without making any adjustments in their behavior.

Strangely enough, that’s not quite how things work as human nature on the federal level is no different than on the state level… when taxes go up, people change their behavior. While most people are not going to move to another country if their federal taxes are raised, they will do what they can to reduce their tax burden, from investing in foreign markets, to parking their money to hiring high powered accounting firms to help them shelter their income.

Nearby is a table whose data is drawn from IRS numbers showing tax rates from 1986 to 2005. The table focuses in on the top 1% of tax filers and isolates the tax rate and the share of overall taxes paid. The third column is a ratio I created that I 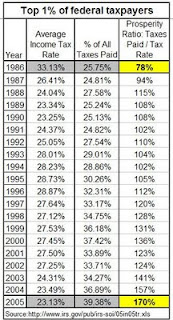 call the Prosperity Ratio. (My apologies if someone has used the ratio earlier, I’ve just not seen it.) Essentially it is the average income tax rate paid by the top 1% divided by the percent of the overall income tax burden paid by the persons in that same 1%. I’ve dubbed it Prosperity Ratio because the higher the ratio, the more people who are prosperous and happy… When taxes on the “rich” are lower they get to keep more of their money, which of course makes them happy. Simultaneously those same taxpayers pay a larger percentage of the overall income tax burden, which means that the remaining tax payers are happier as well because they are paying a smaller portion of the overall income taxes. Everybody wins.

To demonstrate how this Prosperity Ratio works, in 1986 when the average tax rate paid by the top 1% of taxpayers was 33.13%, they paid 25.75% of all federal income taxes resulting in a Prosperity Ratio of .78. By 2005 when the average rate paid by the top 1% had dropped to 23.13%, they were paying 39.38% of all federal income taxes, generating a Prosperity Ratio of 1.70. Everyone won as the rich, able to keep more of their money were motivated to create more wealth, generating more revenue for the tax collector. The other 99% of taxpayers were happier as well as they were able to keep more of their income too. It should be the goal of the government to generate the highest Prosperity Ratio by cutting taxes as until the ratio starts declining.

Don’t hold your breath of course. Liberals live in a fantasy world where they can raise taxes or increase red tape and the world magically bends to their will and everyone lives happily ever after. Unfortunately for the rest of us we have to live with the real world consequences of their static delusions. Maybe now is a good time to have a discussion about the difference between static and dynamic, or in the lexicon of a liberal, fantasy and reality. And maybe this time we should include the people who keep voting for them…