Wisconsin proves it's possible to save America from union thuggery

After spending two years touring the United States in the 1830’s Alexis de Tocqueville wrote: “The greatness of America lies not in being more enlightened than any other nation, but rather in her ability to repair her faults.” One wonders what he might have thought had he spent the last six months in Wisconsin.

The road Wisconsinites have traveled since November of last year may well indeed foretell the future of America.

Everything began in November when, fed up with fiscal irresponsibility on the part of Democrats, Wisconsin voters handed to the GOP not only the Governor’s mansion, but both the House and the Senate as well. The mandate was clear: Get government spending under control.

The state’s new Governor and legislature hit the ground running with the Senate working on the Governor’s bill that would strip government employee unions of the ability to negotiate for benefits and forced those state employees to contribute more to their health and pension funds. More consequentially it made the paying of union dues voluntary rather than mandatory. 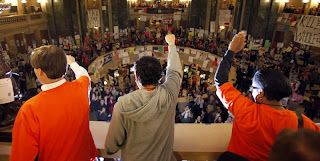 Governor Walker was vilified and became the center of a firestorm of protest. On February 17th the 14 Democrats in the Senate decided to run away to Illinois, depriving the body the required 20 member quorum necessary to pass any fiscal bills.

Almost immediately the Capitol came under siege by a marauding horde of leftists bent supporting the Democrats and stifling the will of the people.

By March 9th, having had enough of the obfuscation by the Democrats, the GOP senators stripped the bill of all fiscal elements and proceeded to pass the bill after providing two hours notice online. (Only fiscal legislation requires a quorum.) The Assembly passed the bill the next day and Governor Walker immediately signed it into law…

Democrats immediately claimed the law was invalid and quickly found a state judge who would support their claim despite the fact that the Senate clearly did not violate the state’s Open Meeting’s law nor internal Senate rules. Dane County Judge Maryann Sumi at first attempted to stop the law from being published and then issued an order stopping any further implementation of the law.

The real question with Judge Sumi’s ruling is: Are there any limits on the power of the courts? Apparently the judiciary has the right to insert itself in the inner workings of a co-equal branch of government, in this case the legislature. If the Judge’s order is allowed to stand, if it is above even its co-equal branches of government then there is truly no place a judge’s gavel cannot reach, not within the legislature, the executive branch nor one would expect, into absolutely every aspect of the lives of citizens. Who could stop them?

At this point democracy in Wisconsin had become a farce. The people vote; the elected officials attempt to do what they were elected to do, all the while being pilloried and attacked by opponents. They succeed in passing the law according to the constitution and suddenly a member of the judiciary rips the reins of power from the people. Soon the case finds its way in front of the state Supreme Court.

The witching hour came last Tuesday when Justice David Prosser was up for reelection to the Supreme Court, which is currently composed of four generally conservative justices and three progressives. Union and other leftist organizations from around the country poured tens of millions of dollars into Wisconsin to support Assistant Attorney General JoAnne Kloppenburg, a progressive who could be considered a sure fire vote to sustain Judge Sumi’s ill advised ruling.

The question on everyone’s mind leading up to the election was, would the citizens of Wisconsin vote to support their elected officials or would they cave into the intimidation and lies of the unions? While a recount seems likely, in what was by far the most highly participated in judicial election in Wisconsin history, it appears that the citizens of Wisconsin have decided that they have had enough of the thuggish behavior of its public employee unions and Justice Prosser will be retuning to the Supreme Court.

If this resurgence of fiscal responsibility and internal fortitude was not enough to solidify Wisconsin’s position as the leading light in the very winnable battle to save the Republic, there are a few more things that should make the state’s position crystal clear:

1. Wisconsin voters gave 3 term incumbent Russ Feingold the boot in November.
2. Paul Ryan’s district is in Wisconsin, and Ryan is the leading voice in the GOP on fiscal responsibility.
And perhaps most tellingly:
3. Wisconsin citizens are not only withstanding the union thug tactics, they are actually pushing back…

Many of us feel like America is approaching a precipice on the edge of an abyss from which there would be no return. We could do much worse than look to the example set by Wisconsin’s citizens and politicians (or at least some of them…) to remind us that it is possible to pull back from the edge regardless of the foes lined up against you. I think Tocqueville would not have been surprised.

Much to Baseball's Dismay, the South Has Risen to Take Over the World Series
Jerry Wilson

Donald Trump Jr. Thanks Washington Post for the 'Greatest Correction in History'
Townhall
For some reason, this Politico reporter is not happy with GOP Rep. Jeff Duncan's mask. Maybe she hates science?
Twitchy
WH Official Comment on 'F Joe Biden' and 'Let's Go Brandon' Chants Is as Bad as You Would Think
Redstate
The Morning Briefing: Maybe Democrats Just Don't Like Their Kids Very Much
PJ Media