There’s an old saying; A picture is worth a thousand words. Pie charts will likely never be confused with great art in terms of story telling, but they have a way of making complicated issues clear. Income taxes are one of those things that are naturally difficult to grasp and the issue is made that much more opaque because liberals love to obscure the facts.

One of the shibboleths of the left is that the rich don’t pay their fair share of taxes. One of the more amusing segments of the 2008 Presidential campaign involved Neal Boortz asking then Democrat hopeful Dennis Kucinich two simple questions:

Congressman Kucinich answered: He thought the top 1% of income earners earned 60% of the income and paid about 15% of the taxes. He was a little off. In fact, the top 1% of income earners earn approximately 17% of all the earnings in the country. That’s certainly higher than the 1% they represent of the population but a far cry from Congressman Kucinich’s 60%. More astounding however, is that they pay fully 39% 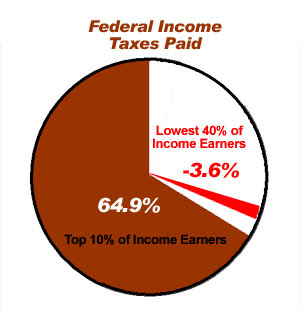 of all of the federal income taxes – according to a 2009 Congressional Budget Office report. The below chart demonstrates clearly the absurdity of the notion that the rich do not pay their fair share of taxes.

The first chart shows that the rich do indeed pay far more than their oft cited “fair share” of income taxes. Not only that, it also shows that the bottom 40% of wage earners actually have a negative tax rate and get money back from the government in the form of income tax credits! 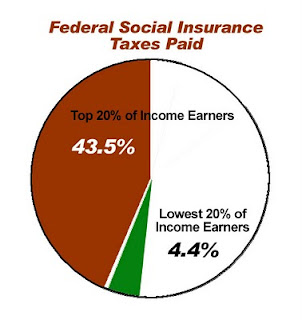 disproportionate amount of the Social Security / Medicare tax. That too is false. The second chart states that the top 10% of wage earners pay 43.5% of all social insurance taxes while the bottom 40% pay just 15%.

Why does any of this matter in the first place? The third chart (taken from a 2010 report from the Tax Foundation) demonstrates why…Jobs. It compares wage & salary, capital gain, and dividend income for all income earners. As you can see, for the 80% of income earners below $200,000 per year, wages (i.e. a job) make up almost their entire incomes. Without jobs that someone else creates they would have no income… except government transfer payments. 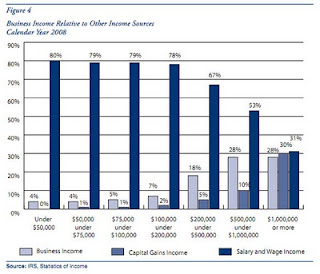 Put another way, jobs are not created by wage earners. Jobs are created by entrepreneurs risking their capital to start businesses… And those entrepreneurs are the usually found in that $200,000 and above group. The businesses they start generate 65% of all new jobs created in the United States.

While the first two charts debunk the myth that the rich do not pay their “fair share” the above chart demonstrates why it matters: The rich are the ones starting small businesses and creating jobs and prosperity.

Myths die hard, particularly when their proponents willingly ignore the facts. The myth that the rich don’t pay their fair share should soon be headed the way of the global warming hoax. Clearly it is the people at the upper end of the income spectrum that are being treated unfairly.   Not only are they responsible for 2/3 of all new jobs created, but in return they are rewarded with being allowed to keep even less of their income as they become more successful.  They don’t pay their fair share… they pay far more.  Perhaps as more Americans examine and understand what it takes to generate and sustain a dynamic and growing economy the “tax the rich” cries will begin to fall on deaf ears. That’s exactly what America could use right now, a reinvigorated entrepreneurial class striving to put more money in their pockets… and generating millions of jobs in the process.