Scott Walker has a messaging problem

Wisconsin governor Scott Walker has a problem. It’s not the smelly, indian sitting – Kumbaya singing activists who are turning the statehouse into Woodstock ’11. Although they are a problem – it’s primarily to the olfactory system. Nor is it the union thugs who are harassing reporters, people who dare to voice their support of the Governor and representatives on their way to their offices.

No, the Governor’s problem is one of messaging. For much of the last two weeks the news cycle has been focusing on Madison. Much of the coverage in the mainstream 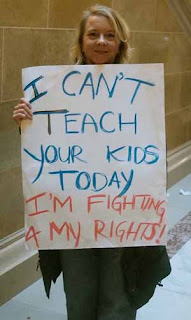 media has focused on the union message of standing up for “working families”, protecting union “rights” and “fairness”. That’s a problem for the Governor. Americans generally will pull for an underdog in a fair fight and the mainstream media is making this out to be a David and Goliath competition… and he’s Goliath.

Few Americans (or Wisconsinites for that matter) are actually in Madison and able to see exactly what is going on it the Capitol. As such they are forced to rely on what is being reported, primarily on television, but also on the Internet. While Fox News dominates the cable news arena, their numbers are very small when compared to broadcast network news. The average news program on Fox News attracts approximately 2 million viewers nightly while ABC, NBC and CBS have a combined 23 million viewers between them. Online Fox News defeats the news websites of the networks, its traffic is dwarfed by CNN’s.

At the end of the day, this story, like most stories, political and otherwise, comes down to two things, facts and communication. On the facts, Scott Walker has everything on his side. The state’s finances are a mess. Unionized government workers earn more money, have better benefits and much more job security than their private sector counterparts, i.e. the taxpayers. (The average Milwaukee public-school teacher earns $56,500 a year in salary and another $43,500 in benefits for total of $100,000, and in return Milwaukee students perform far below national standards…) The state’s income tax rates are higher than 37 other states and its corporate income rate is higher than 32 others. According to Arthur Laffer, in 2010 Wisconsin came in 44 out of 50 states in economic performance. The facts are in his corner. It’s the communication that Governor Walker is missing.

Most Wisconsinites, like most Americans, when looking at this situation would understand that something needs to be done, and that raising taxes is not the solution. At the same time there seems to be some residual support for unions and collective bargaining. This in large part has to do with the sympathetic portrayal of the public sector employees by the media. What you rarely see from the mainstream media however is the thug tactics that unions across the country… including Wisconsin, use to harass, intimidate and threaten their opponents. (That last piece is from the NYT and a hat tip is due for one of the rare MSM pieces that mentions such tactics.) This is fundamentally why unions want Card Check. It’s one thing to vote against a union secure in the anonymity provided by a secret ballot, it’s a completely different thing when the union enforcers are standing at the front door of your home with a clipboard or hovering over you at the signature table.

In this current environment Walker should take a page from another darling of the GOP Chris Christie. Christie has been out in the trenches mixing it up with union members across the state. The web is chock full of videos of Christie taking questions from audience members complaining about having to pay for their own benefits or having their wage raises limited. In each case he clearly explains the situation the state is in, why the state is in that situation (usually demonstrating how union intransigence helped bring it about) and what he is trying to do to fix the situation. Invariably audiences understand his position and the state’s population largely does as well.

Although Walker has been crystal clear in his critique of Democratic lawmakers and has spoken about the challenges the state faces, he has yet to put on a full court press in bringing his message to the citizens of Wisconsin. This can be seen in the latest Rasmussen poll that shows support for his position down to 43% amongst likely state voters. While a governor should never govern by poll, this poll suggests that he is not getting his message out clearly. This is particularly true given the fact that Wisconsin voters just put him in the Governor’s mansion and gave the GOP both houses of the legislature with a mandate to fix the state’s financial mess. Given that, the public should be poised to give him benefit of the doubt. The fact that his numbers are moving in the wrong direction suggest he has a communication / messaging problem.

The support of a majority of the voters is not a requirement for implementing a policy. The foundation for this was perhaps best said by Edmund Burke: Your representative owes you, not his industry only, but his judgment; and he betrays instead of serving you if he sacrifices it to your opinion. Majority support is however critical for long term success of any policy, particularly when not all legislators live up to Burke’s ideal. As long as Walker allows the flower children, the union thugs and the mainstream media to define the discussion, his numbers will continue to decline. If he hopes to succeed in his pursuit of transforming Wisconsin from an economic laggard to a job creating dynamo, he might want to figure out how to take control of his own story and get the message across to the voters of Wisconsin that their state is a landed version of the Titanic headed towards an iceberg and he’s the only one suggesting a change of course.