Scott Walker channels JFK... except for that Executive Order 10988

We are at the beginning of the most consequential domestic conflict the United States has fought since the Civil War. Like the battle between the Blue and Grey, this one is for the continued existence of the country. Today’s weapon of choice might be the legislative pen and the protest sign and there may not be blood flowing in the streets, but make no mistake, the stakes are exactly the same: The survival of the nation as we know it. If that sounds like hyperbole, think about the German inflation of the 1920’s or Zimbabwe today. At some point taxpayers will have nothing left to give, the Chinese will stop buying our debt (or worse…) and our creditors will begin calling in loans that Uncle Sam is unable to pay. We might survive, but America would be a decidedly different nation.

While Lincoln’s Gettysburg Address was the speech that defined that war, another president’s words define this one. “Ask not what your country can do for you – ask what you can do for your country.” Today, one does not need to look far beyond Wisconsin to recognize that the party of JFK has long abandoned his challenge.

The fight that is going on in Wisconsin right now, the fight that took place in California six years ago, and the fights that are on the horizon in places like New Jersey, Ohio and Michigan are at the front lines in the coming war. The lines in this conflict are crystal clear: On the one side you have the Democrat Party, which is a wholly owned subsidiary of the Unionistas (a great word taken from Rush) and on the other side you have a GOP being dragged, kicking and screaming, into becoming an advocate for fiscal responsibility by the Tea Party movement.

Six years ago Arnold Schwarzenegger went through the much of what Scott Walker is experiencing today. Faced with perhaps the most left leaning legislature and population 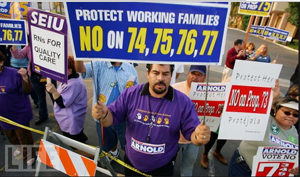 in the country, the Governator eventually took down his reform shingle and became just another GOP speed bump on California’s march to economic suicide.

To understand what is at stake in Wisconsin and the rest of the country, at both the state and federal level, one need think about one name: Bernie Madoff.

Bernie Madoff spent a quarter of a century wooing investors into his Ponzi scheme. As dupes were encouraged to “invest” and others were smiling all the way to the bank, the Keystone Kops at the SEC never recognized the problem. Everything was sugarplums and cherries until the day the fraud was exposed – by Madoff’s sons, not by the government.

Over the same quarter century the exact scenario has played itself out in statehouses across the county with governors and legislators playing the role of Bernie Madoff. In this case however the taxpayers were the dupes and the public sector unions the ones cashing the checks. Now that the schemes have been exposed for exactly what they are, the unions want to keep cashing the checks, regardless of whether or not there’s actually money available to cover them.

Where Kennedy challenged citizens to recognize that the role of government was not to be a trough from which pigs feed, today’s Democratic Party is willing to bankrupt states and the federal government for the enrichment of the public sector unions. Rather than recognizing the challenge at hand, the Democrats have instead chosen to seek to play on the public sympathies by suggesting that they are merely seeking to protect vulnerable worker rights.

In an interesting contrast to the pollyannaish voters of California who believe they can continue their spending binge even as employers flee the state, Wisconsin voters, when facing similar dire circumstances, decided instead to put a stake in the heart of the Democrat machine and handed the GOP the House, the Senate and the Governor’s mansion. Now that the elected officials are seeking to do exactly what the voters sent them to Madison to do, the Democrat / Unionista parasites have cried foul and are seeking to bring the state to its knees. 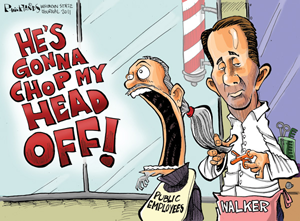 They should not be surprised when they discover that their clarion call inspires few followers beyond their own cabal, and in fact results in a strengthening of the GOP. In a state with 7.7% unemployment – up from 4.3% two years ago – a sea of red ink and an economic competiveness ranking of 40 out of the 50 states, Wisconsinites are not particularly sympathetic to state workers who earn 33% more than private sector workers, have extraordinarily generous health and retirement benefits, and all of that while enjoying almost iron clad job security.

The battle going on in Madison is nothing less than the battle for the future of America. Scott Walker is leading the charge with guys like Chris Christie and John Kasich at his side. Americans of all stripes – with the obvious exception of Democrat Unionistas & Californians – seem to finally be waking up to the fact that public sector unions are nothing but a cancer on the body politic. (JFK doesn’t escape unscathed in this disaster as he unleashed public sector unions on the federal government in 1962 with Presidential Order 10988.)

Like any cancer patient, if the country wants to survive the cancer will have to be cut out or somehow rendered benign. Ronald Reagan understood that and it seems that Scott Walker does as well. Hopefully Madison will be the first in a line of battles that culminates at the ballot box in 2012. If enough battles are won America may yet avoid a Madoff like meltdown.