Prosperity is not a birthright… 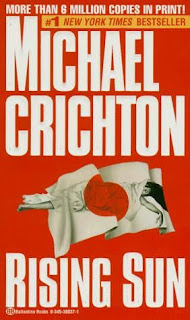 The Michael Crichton thriller Rising Sun was published to much fanfare in 1992. Ostensibly a murder mystery, the book was seen by many as a thinly veiled tale of alarm at the Japanese taking over the planet – economically. The book came after a decade of headlines chronicling the rise of the Japanese juggernaut. In 1987 Sony bought CBS Records and in 1989 Columbia Pictures. 1989 also saw Mitsubishi buy Rockefeller Center and in 1990 the Japanese bought the venerated Pebble Beach complex on the California coast. Not only were Americans reading headlines about Japan buying up the country but increasingly they were driving Japanese cars, entertaining themselves with Japanese electronics and staying in Japanese owned hotels if they were practically anywhere in the state of Hawaii. Three and a half decades after emerging like a phoenix out of the rubble of WWII, Japan was poised to take over the world.

A funny thing happened on the way to Japan’s economic coronation however… the country crashed into a brick wall. In 1991 Japan saw the beginning of a real estate driven financial collapse that saw the Nikki drop from a an all time high of 39,000 in 1989 to below 8,000 in 2008. Along the way the economic juggernaut cratered. Between 1980 & 1990 Japanese GDP grew at an average annual rate of 2.4%. From 1991 to 2009 it grew at an anemic average rate of .9% per year. That may not sound like much of a difference, but step back and the difference is stark. During the decade of the 1980’s the Japanese economy grew 24%. Over the two decades since it has grown by a mere 18%.

Fundamentally the Japanese took their prosperity for granted. The government sought to coddle small businesses by limiting competition, both domestic and foreign. They 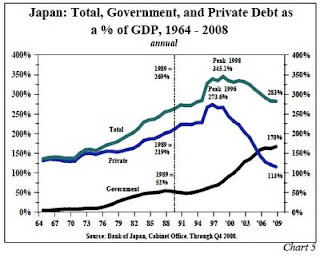 failed to force banks to acknowledge and dispose of their bad loans. Low and negative interest rates gave investors around the world little reason to look to Japan. Most importantly government spending as a share of GDP increased as did the taxes and debt necessary to support such expenditures. Today government expenditures exceed 41% vs. 32% in 1980 and debt has soared to 200% of GDP from 46% in 1980. At the end of the day the Japanese took their eyes off of what it takes to maintain the prosperity they had worked so hard to build.

The coup de grace proclaiming Japan’s economic fall came last week when China “officially” became the second largest economy in the world. (Measured on a Per Capita Income basis however, the Japanese are still far richer than the Chinese.) China is now seen by many the way the Japanese were in the 80’s and early 90’s. Much of the merchandise on our shelves bears a Made in China label, China is acquiring companies and natural resources around the world and the government is the single largest holder of US Treasury Bonds by far. Everything seems to be going in China’s direction.

This column however is not really about the fall of Japan or whether China’s one billion people will take over the world. The tale of Japan is illustrative, not because the Japanese turned out to be paper economic tigers or that free markets eventually fail. No, the Japanese tale is important because it demonstrates what happens when a nation forgets that prosperity is not guaranteed, it’s not a birthright. It is the Japanese’s national lapse in judgment that is important.

The United States was the driving economic force for virtually the entire 20th century. Between its inventors, innovators and entrepreneurs, it led the way to the greatest advance in the condition of man in human history. If any people had the right to think prosperity was their birthright, it would be the Americans of the 21st century. That would be a mistake however, but far too many Americans are making it.

America sits atop the world’s economic pyramid not because of divine fiat or the luck of the draw. The prosperity that Americans enjoy in 2010 (despite the current economic troubles) is the result of generations of hard work, risk taking and innovation on the part of millions of businessmen and their employees over the last 150 years – on a playing field of economic and personal freedom established by our Constitution. Our prosperity was never set in stone and things could have turned out much differently. Indeed we survived the Great Depression despite the FDR’s drive to control virtually every aspect of American economic life. Don’t forget, it was WWII that pulled America out of the Depression, not the New Deal. In 1940 unemployment still stood at 14%, up from 3.1% in 1929, federal spending as a share of GDP was at 10%, again up from 3% in 1929 and the stock market, which by 1932 had dropped 89% from its 1929 high, did not return to that level until 1954.

As America struggles with record debt and deficits, a moribund economy and its citizens awash in a raging storm of government regulation and tax increases, the passing of the torch from Japan to China should help crystallize the choices in November. There is no guarantee that putting the likes of Marco Rubio, Rand Paul and Sharon Angle in the Senate and Rob Woodall and Allen West in the House will stop President Obama and his stridently progressive agenda. What you can be certain of however is that they, along with most of their conservative and tea party brethren recognize that America’s greatness prosperity has always come from the innovation, entrepreneurship and hard work of her citizens and their willingness to brave the risk / reward paradigm in order to achieve their own version of the American dream. The alternative to fiscal conservatives is more of the Democrat idiocy that prosperity is created by government spending and regulation.

That government spending and regulation along with its companion taxes and debt are a recipe for disaster… So, as we research candidates on our Chinese made iPads and contemplate which lever to pull in November, we might want to remember that 30 years ago those iPads would likely have carried a Made in Japan label, and ponder how prosperity can be lost…

Are Republicans Still Clear Favorites to Win Back the House? Here's What One Expert Is Saying.
Townhall
Gay man boasts about owning homophobic 7-year-old at the park the other day — and manages to make *himself* the villain of his made-up story
Twitchy
Joe Biden Trashes Italy's Giorgia Meloni in Massive Self-Awareness Fail
Redstate
The Morning Briefing: Mitt Romney's Tedious Treachery Shtick Has Worn Thin
PJ Media