Barack Obama thinks you're an idiot...

For anyone who still had questions about Barack Obama’s character and what he thinks of the American people, last week’s press conference should have given them 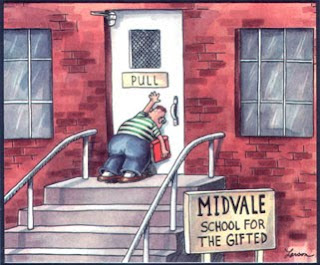 everything they needed to know about both.

During the question and answer period he gave us the most common of the Democratic platitudes about energy: “We can’t drill our way out of this,” and “the easily accessible oil has already been sucked up out of the ground.” This of course was supposed to explain to the simpleton American public that the country has essentially run out of easily accessible oil and therefore we’re drilling five miles from shore and a mile deep because that’s the only alternative left that will allow us to sustain our shameful level of energy usage. These comments were intended to bolster what the President hoped would be the primary takeaway from the press conference, which he presented at the end of his prepared remarks: “Let me make one final point. More than anything else, this economic and environmental tragedy, and it’s a tragedy, underscores the urgent need for this nation to develop clean, renewable sources of energy.”

In little more than an hour the President demonstrated 1. That he believes the American people are idiots and 2. That he is willing to manipulate an unprecedented disaster for his own political purposes.

By stating (and expecting us to take as gospel) that we are drilling in mile deep water five miles from shore because there is no oil available anywhere else, he demonstrates the low esteem he holds the American public. He assumes we are too stupid to know that the Democratic / Environmental Industrial Complex has driven oil exploration to where it is today. By shutting down the potential for drilling on land in places like ANWR and severely restricting drilling in much shallower waters on both coasts, they have forced oil companies to drill in these much deeper and more dangerous waters. Perhaps most insidiously, they have continuously hobbled the exploitation of shale oil reserves on federal lands. To put this in perspective, in just three states, Utah, Wyoming and Colorado, the United States has at least 1.3 trillion barrels of oil available in the form of oil shale. That is more oil than Libya, Venezuela, Nigeria and the entire Middle East have combined! Imagine, right in the middle of the country is enough oil to fuel the United States economy for the next century. Even more, by tapping those domestic resources we could keep at home much of the $500 billion a year we send overseas each year importing oil from countries whose populations don’t much care for the United States in the first place.

If the President wants to make the argument that we shouldn’t extract oil from shale or drill off our Atlantic and Pacific coasts, that is a debate he can undertake, but to suggest that the country is in the perilous position of having to risk our undersea environment simply because we have no alternative is disingenuous at best and duplicitous at worst. To use this emergency to put forth his environmental agenda suggests the latter.

If the president is able to manipulate this unfortunate situation to further burden the American economy with his green jobs agenda, in the long run this spill will be not be remembered for the tragedy it brought to the people of the Gulf Coast, but 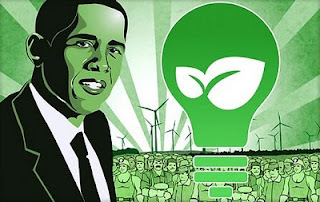 rather it will be remembered as the fulcrum upon which Barack Obama foisted economic stagnation on the United States and introduced an unprecedented level of sustained unemployment to the American people. In this tenuous economic environment he will have used a national disaster to implement a policy that the nation doesn’t want and one that will result in abysmal failure. Not sure about that? Check out Spain’s experience with such vaunted green jobs: $750,000 per green job (completely paid for with subsidies from the government), 20% unemployment and a loss of 2.2 jobs for every “green job” created.(more here) California is not far behind, but it might be waking up.

Barack Obama thinks the American people are idiots and they are willing to believe just about anything he tells them, regardless of the facts. Add to this his propensity to manipulate the truth to achieve his ends and this spill has the potential to become a disaster felt far beyond the beaches of the Gulf Coast. The economic train wreck that is Spain is not something most Americans want to experience, but luckily Barack Obama knows what’s good for us so we might just get to anyway. Maybe we can import La Tomatina too. At least that looks fun.

Liberals Are Really Going to Hate Ron DeSantis Over Florida's Latest COVID Benchmark
Townhall
This is REAL?! Blue-check compares 'riots today' search results between Google and DuckDuckGo and just WOW (screenshot)
Twitchy
Why Is Our Kneejerk Reaction to Blame Black Men With Guns?
Redstate
The Morning Briefing: U.S.May Want to Look Into Getting Rid of Minnesota
PJ Media