As a Clinton backer in the 90’s… I’m pretty amazed at the irony of last night’s security line up… A president, a Senator and former presidential candidate, and now a Senator and current VP candidate who all argued for unilateral military action against Iraq, noting France and Russia would never support us, because of the threat they posed with their WMDs… whining about McCain support similar policies.

And all of them are now claiming they have a right to judgment for McCain’s vote? While I agree there’s plenty to criticize Bush on when it comes to Iraq, when it comes to McCain’s support and consequent criticisms of how Bush was executing that policy… it puts him far ahead in judgment than all three of these yahoos who all seemed to flip when it became politically expedient or popular to do so.

Below are these same three foreign policy ‘experts’ disagreeing with Obama, even before Bush was in office:

Then and only then did Iraq admit to developing numbers of weapons in significant quantities and weapon stocks. Previously, it had vehemently denied the very thing it just simply admitted once Saddam Hussein’s son-in-law defected to Jordan and told the truth. Now listen to this, what did it admit?

It admitted, among other things, an offensive biological warfare capability notably 5,000 gallons of botulinum, which causes botulism; 2,000 gallons of anthrax; 25 biological-filled Scud warheads; and 157 aerial bombs.”

In the next century, the community of nations may see more and more the very kind of threat Iraq poses now a rogue state with weapons of mass destruction ready to use them or provide them to terrorists, drug traffickers or organized criminals who travel the world among us unnoticed.

If we fail to respond today, Saddam and all those who would follow in his footsteps will be emboldened tomorrow by the knowledge that they can act with impunity, even in the face of a clear message from the United Nations Security Council and clear evidence of a weapons of mass destruction program.

Plenty of quotes from his Administration on the threat Iraq posed as well, from his Secretary of State to his own wife and even Clark, his prize general at the time. But we can skip past those collaborating quotes and move right on to the next big speaker of the night, John F. Kerry:

But hey, all the war supporting Democrats like to claim they were “misled” including John Kerry. What was he saying back during the Clinton Admin? As it turns out, he was pushing for military action to disarm the threat posed by Iraq and its WMDs.

But let’s revisit Nov. 17, 1997, when nobody else in Washington except the Inside the Beltway column led with an item headlined, “Finish the mission.”

“Debate on whether to take out Saddam Hussein, the Iraqi strongman, is over as far as one Democratic senator is concerned,” or so we had written.

“Sen. John Kerry of Massachusetts is calling for a ‘strong’ military attack in response to the Iraqi leader’s ‘horrific objective of amassing a stockpile of weapons of mass destruction.’ “

Weapons of mass destruction? That’s what Mr. Kerry called them.

“As the senator points out, military might is the only language Saddam knows and fears. ‘Saddam Hussein should pay a grave price, in a currency that he understands and values, for his unacceptable behavior,’ says Mr. Kerry. ‘This should not be a strike consisting only of a handful of cruise missiles hitting isolated targets primarily of presumed symbolic value. But how long this military action might continue and how it may escalate … and how extensive it would reach are for the [White House, National] Security Council and our allies to know and for Saddam Hussein to find out!'”

And ripping on both France and Russia for their monetary interests behind their opposition to enforcing the ceasefire agreement and disarming Iraq… while commending the President (Clinton) for taking unilateral action:

SEN. JOHN KERRY, (D), MASSACHUSETTS, FOREIGN RELATIONS COMMITTEE: Well, John, you’re correct that this resolution is less than we would have liked. I don’t think anybody can deny that we would have liked it to have threatened force and we would have liked it to carry the term serious consequences will flow. On the other hand, the coalition is together. I mean the fact is there is a unanimous statement by the security council and the United Nations that there has to be immediate, unrestricted, unconditional access to the sites. That’s very strong language. And it also references the underlying resolution on which the use of force is based. So clearly the allies may not like it, and I think that’s our great concern — where’s the backbone of Russia, where’s the backbone of France, where are they in expressing their condemnation of such clearly illegal activity, but in a sense, they’re now climbing into a box and they will have enormous difficulty not following up on this if there is not compliance by Iraq.

“There’s absolutely no statement that they have made or that they will make that will prevent the United States of America and this president or any president from acting in what they believe are the best interests of our country,” said Kerry. “And obviously it’s disappointing. It was disappointing a month ago not to have the French and the Russians understanding that they shouldn’t give any signals of weakening on the sanctions and I think those signals would have helped bring about this crisis because they permitted Saddam Hussein to interpret that maybe the moment was right for him to make this challenge.”

“The administration is leading.” said Kerry. “The administration is making it clear that they don’t believe that they even need the U.N. Security Council to sign off on a material breach because the finding of material breach was made by Mr. (Richard) Butler. So furthermore, I think the United States has always reserved the right and will reserve the right to act in its best interests. And clearly it is not just our best interests, it is in the best interests of the world to make it clear to Saddam Hussein that he’s not going to get away with a breach of the ’91 agreement that he’s got to live up to, which is allowing inspections and dismantling his weapons and allowing us to know that he has dismantled his weapons. That’s the price he pays for invading Kuwait and starting a war.”

“The fact is that over a period of time France and Russia have indicated a monetary interest,” he said. “They on their own have indicated the desire to do business. That’s what’s driving this. I mean, as (The New York Times’) Tom Friedman said in a great article the other day, France Inc. wants to do business with oil and they are moving in the exact sort of opposite direction on their own from the very cause of the initial conflict, which was oil.” – CNN CROSSFIRE November 12, 1997; Wednesday 7:30 pm Eastern Time

Astonishing to some. Old news to many.

But hey, Obama couldn’t have possibly picked someone in the same camp… right?

We all know Biden voted for the war. But Obama wouldn’t have picked someone who totally undermines his judgment meme… right?

Biden was obviously misled by the Administration too right? After all we heard him rip into Bush and McCain over getting us into the Iraq mess last night.

He couldn’t have been standing up there and lying his friggin tail off, right? 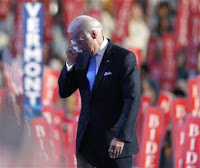 And you [Scott Ritter] and I both know and all of us here really know, and it’s a thing we have to face, that the only way, the only way we’re going to get rid of Saddam Hussein is we’re going to end up having to start it alone — start it alone — and it’s going to require guys like you in uniform to be back on foot in the desert taking this son of a — the — taking Saddam down. (Laughter.) You know it and I know it.

So I think we should not kid ourselves here. They’re stark, stark choices. I happen to agree with your assessment: A, that diplomacy was picked over inspection-driven confrontation; B, that there’s an illusion of arms control that cannot guarantee he will have no system of — no weapons of mass destruction; and C, that as long as he’s there, he’s concluded he can absorb air strikes. So I think you’ve done a significant service for this country; a different policy judgment has been made. If we don’t like the policy judgment — in my view, from observation that’s been made by the administration, and the Security Council and our allies — if we don’t like it, we should step up to the ball and say it, because you forced us and I think properly so, to a day of reckoning here about what our policy should be.

He argued specifically that other UN Security Council veto members would make that impossible:

So what are we going to do now? We know that France and Russia aren’t going to be with us. We’re quite confident China’s not. We’ve already run those traps; they’re not there.

So one has to ask themselves. Why, on the night Obama was hoping for foreign policy credential boosting speeches, did he pick the top three speakers as those who disagreed with him?

Because they weren’t misled. They had the best intelligence available at the time, and like their Republican colleagues were wrong about Iraq’s capabilities.

And Obama, who claims grand judgment now, is relying on people who believed he was on the wrong side of the issue, long before Bush was in office, as his foreign policy credentials?

According to his one claim to any foreign policy judgment, his 2002 speech, he believed Iraq had WMDs too. He just didn’t believe they were a threat. All of his foreign policy cheerleaders disagreed with him at the time on the threat.

So what did Obama believe about his judgment considering he was backing a candidate that supported the war at the time?

So what does he believe now? Now that that he’s chosen people who disagreed enough with him to take the country to war over that disagreement. Men whose judgment he trusts enough that if he were to be debilitated he’d be alright with them taking the reins in his absence. Men he wants the country to listen to for their foreign policy knowledge.

They say he was wrong. Most say he’s too inexperienced for the job and too naive and the one guy who actually held the job once says his notion of having judgment on Iraq is the biggest fairy tale of his campaign.

One wonders how closely he expects us to listen. The party loyalists said what they needed to last night to ensure their legacy with the party. But anyone who has listened to them beyond the show and spotlights knows what they really believe: Obama is unqualified and any notion that he had some great insight into the Iraq situation is pure bs.

Obama obviously doesn’t want America to listen to his big convention picks on foreign policy… at least not beyond the smoke and mirrors. We need to help America to really listen to them, because their party loyalty is unquestionable… but so are their disagreements that shine an honest light on the least experienced candidate in presidential politics ever: including VP pick, Dan Quayle.