Hillary did everything she was expected to do. But the most interesting part of her convention speech last night was what she left out, some might think intentionally… 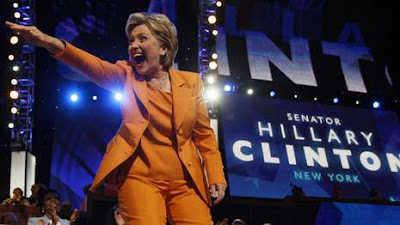 (CNN) — Sen. Hillary Clinton may have endorsed Sen. Barack Obama for president in a speech at the Democratic National Convention Tuesday night, but Sen. John McCain’s campaign said she stopped short of saying that he is ready to lead the country.”Sen. Clinton ran her presidential campaign making clear that Barack Obama is not prepared to lead as commander in chief. Nowhere tonight did she alter that assessment. Nowhere tonight did she say that Barack Obama is ready to lead,” McCain spokesman Tucker Bounds said in a statement.

On a more humorous note, one of the first things we noticed:

Proud wife? Interesting dig by omission at the beginning of her speech… which set the theme of the speech: Pay attention to what I’m leaving out.

Given some have described last night’s ‘unity’ attempt as “the biggest stunt of her career so far” by “one of the most accomplished practitioners of the fine art of political deception” and warning their readers bluntly: “Don’t believe a word of it.”

…let’s just say there’s plenty of reason for people to have their doubts.