Our Founding Fathers understood history and the Laws of nature 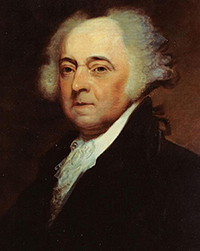 Our founders were not geniuses. They just understood history and the laws of nature and natures god. These two facts of life were the basis reasons for their new worlds success. They must be looking down upon us and wondering just how we fell so far from those most basic principles.

They understood the lessens of Jamestown. By Christmas of 1607 in that first American colony more than 65% of the people were dead. The next year more people came and half of them died. They were literally starved to death. The people were so desperate that they had to eat their cows, horses, and even their dogs. Some even boiled the leather from their shoes to chew on. Its been estimated that of the first 9,000 people who came to the new world only 1,000 survived.

There were two main reasons. One, we as humans really hadn’t made many advances in the last 5,000 years. Their main mode of transportation was animal power and by foot. Even their boats weren’t much different than those of the past 5,000 years. Even the tools they had were ancient. Shovel, a stick plow pulled by ox. Their  clothes were still made from scratch. First handspun then hand sewn.

The second reason? Well to put it simply, communalism.  Zero competition. No private property.  Everybody was allowed to take from the general store what they needed and contribute what they harvested. Sounds good right? Everyone worked for the common good of the colony. In theory everyone would contribute enough to supply the colony with what they needed to live. Cooperation, pure cooperation. No competition no personal responsibility. You were to work in perfect harmony with all your neighbors and all would share equally in the rewards. Socialism at its best.  Just one thing though. It has never worked and it never will. The founders new this from history and now had even more evidence to go by.

Then in 1614 they finally smartened up. They divided up the land and embraced private property and personal reasonability. Liberty. It was just amazing what a little freedom can do. Each family only had to contribute 2 barrels of corn to the general store. The rest was their own property. To use as you wish. The change was nothing short of a miracle. The very same people who had become lazy slobs under socialism were now working harder than ever. That fall the general store was full and the people were too. They had fantastic results.   Freedom, liberty and yes capitalism had saved Jamestown. The people were happy. Happy with their new found liberty to own their own land and reap the fruits of their labor. They instantly became industrious. Free enterprise was born.

Natures law and natures God. It is truth. Common sense. It is permanent and inalienable. The very foundation which our constitution was built upon. Our founders studied the past and learned the lessens well.  In 200 years after the constitution was signed the United States of America made giants leaps in industries and politics and invention.  She accomplished more in those 200 years than the whole world did in the previous 5,000 years. Freedom and capitalism unleashed the human mind and industry.

Its now time we begin to restore those basic truths that the founding fathers wrote about. We have slipped backwards towards socialism. It started long ago but the last 75 or 80 years we have done great damage to the constitution. We have ignored the basic most fundamental truths of the world. Natures law and natures God. Liberty and individualism.
There are two main types of law in the world. Rulers law and peoples law. We seem to be flirting with rulers law now. Not a very smart way to go.

Thomas Jefferson was a giant among men. He spent years and years studying law, history, politics, religion and so on. Jefferson’s years of study impressed a stranger to him so much he wrote:

“When he spoke of law, I thought he was a lawyer; when he talked
about mechanics, I was sure he was an engineer; when he got into
medicine, it was evident that he was a physician; when he discussed
theology, I was convinced he must be a clergyman; when he talked of
literature, I made up my mind that I had run against a college
professor who knew everything.”(William E. Curtis, The True Thomas
Jefferson, Philadelphia: J. B. Lippincott Company, 1901, pp. 358-59.)

We need to restore our understanding of the constitution. Take advantage of the vast knowledge and wisdom the founders left for us. Not turn our backs on it. Not move away from the truths they wrote about. We must reeducate ourselves of our history and our founders.

Just sayin……..
“Power always thinks… that it is doing God’s service when it is violating all his laws.”
John Adams

One Glaring Issue With Twitter's Case Against James O'Keefe
Townhall
This company works harder at social signaling than making a good product
Twitchy
WaPo Fact Checker Points out How an Impeachment Claim Goes up in Flames With Sicknick's Cause of Death
Redstate
Did Wrecking Ball Maxine Waters Give Derek Chauvin Grounds for an Appeal?
PJ Media