Seattle Mayor Mike McGinn has raised the question of who will pay for cost overruns on a tunnel planned to go under Denny Hill to Mercer Street and beyond.  The total cost of the project is expected to be $4 billion.  The City, as well as every government body in the state, is strapped for cash, and is furloughing employees.  In my area, the Sheriffs department is removing 4 Deputies from a storefront (a really bad idea).  The Mayor has been cutting staff, trimming budgets, and doing everything he can to stay within the revenue he brings in.  He is a Democrat Progressive, but he is doing a good job.  He has been in an altercation with the President of the Seattle City Council, Richard Conlin.  Conlin maintains their is plenty of money to pay for cost overruns.  The State is unwilling to pay them, and wrote a law that any overruns be pay for by putting the difference on the property deeds of law-abiding, cash strapped Citizens of the City of Seattle.  The mayor wrote in the Seattle Times:

” The Seattle City Council is about to make a decision committing us to the deep-bore tunnel. This will have a significant impact on our future. Yet a critical question remains unanswered: who will pay for cost overruns?

Here are five reasons why we must answer this question before we pass the point of no return:

A comprehensive Oxford study concluded that 90 percent of megaprojects experienced cost overruns. The downtown bus tunnel, Sound Transit’s Beacon Hill tunnel, and the Brightwater sewage tunnel all exceeded their budgets by significant amounts. These projects weren’t the exception; they are the rule.”

I have been blogging about a bridge called the South Park Bridge, that was closed 9 years after an earthquake damaged it (for the third time in it’s then 71 year history).   A February 2001 earthquake on the Nisqually Fault did some additional damage, reducing it’s bridge rating to a 4.  The people in this area are not Crybabies, and are more than willing to take their chances of landing in a river with their car.  That’s what swimming pools were designed for, to practice for earthquakes.  The Neurotic King County actually owns the bridge.  Why they think that a community living next to the highest value target in WW2 (Boeings Plant 2), and the highest value target in the Cold War (Boeings Design Team), in a region filled with targets for nuclear missiles, would worry about a small thing like a bridge getting stuck or collapsing, is beyond me.  Never mind the fact we live with active volcanoes and moving fault lines.  It keeps life interesting and gives reporters something to write about.

Well the Council President revealed something in an interview with a local blog, the White Center Blog.  He said the $15 million that the Council pledged, has nothing to back it up.

“The Seattle City Council President says the City does not have an identifiable source for the $15 million it has pledged, and he suggests it could come from a voter approved bond issue known as Bridging The Gap, a fund used for special project including filling Seattle’s plethora of potholes, a fund already used by a mayor and Council grasping for money to fill a huge budget gap.”

Now how can he say cost overruns on a $4 billion tunnel are no big deal, when there is no money in the treasury for a bridge?  Services are cut already, what would he cut if the tunnel boring machine got stuck?  or if soils were too soft for the machine to operate?  Would the Seattle Council let go of more Police, Firefighters and Teachers?  The decision to build a tunnel was made eight years ago, when the economy was growing, and tax cuts had things rolling again.  Spending soared in this State, and the good times were rolling.  We are not in the same situation now.  Times have changed, and so should spending habits.  The voters put in a new and different type of Mayor for a reason.  They didn’t like the tunnel decision, the government had gone against a vote expressly to reject a tunnel, and they were tired of the previous Mayors high spending, and support for an elite, government subsidized, business community.  The Strangers Dominic Holden compiled a huge series of things that could go wrong.  It is not neccesary to read it, but if you have time, it is a good piece of commentary and logic, showing local governments lack of critical reasoning.  (contains some spicy language, and kinda long, but good if you have time)

I will add to the list of Dominic’s, but from what we will not have the money do take care of properly, if uncovered.  This area where the seawall work is taking place used to be a sand spit extending south towards the Duwamish Delta (now valley).  It created a shallow harbor where Indians came in their dug-out canoes to trade with early settlers.  Doc Maynard staked a claim for 300 acres in his name, and 300 acres in his wifes name, covering this entire area of work.  He gave up acreage to Henry Yesler to build a sawmill.  It was the best land he had, and he gave it willingly, for free.  Mr. Yesler built his sawmill, and through the sawdust in the bays around him.  It was called Sawdust Hill.  A later entrepreneur set up a drinking establishment, and a house of ‘ladies’.  Most of the Lady Workers were Indian, and later New Mexican.  What constituted a proper burial was not the same thing as for White Men.  This also was a violent area.  If a murder occurred, the perpetrator was not going to go to the graveyard for a proper burial.  Madam Damnable also operated in tis acreage.  It was a rough and tumble town in it’s first 40 years, and all the action was Pioneer Square and south.  Never mind that Indians traded there for centuries.  Like any one else, they have their altercations too.  And all of the area is either loose sand, or sawdust.  There are more bodies buried there than in Lakewood Cemetary.  Sorting them out would be enormously expensive.

clay. Fill deposits, which are highly variable in density, thickness, and type, are

present over the native soils. The fill deposits may contain a variety of debris,

including old piles, railroad ties and rails, and concrete. Groundwater is located

within 10 feet of the ground surface and varies with the tide level in Elliott Bay.”—-

However, the association of King County Historical Organizations paints a very different picture:

may be discovered in the course of the project. Although the

document reported no specific finds, “areas with a high

probability for hunter-fisher-gatherer, ethnographic, and historic

the current street pavement. According to a book co-authored by

Marc Hershman, professor of marine affairs at the University of

Washington, First Avenue and Yesler Way may be the site of a

crossing place.” As many as 200 people may have lived in eight

large, cedar-planked longhouses around 1800 at this site, only

one block from the current viaduct.3

Excavations of the area would likely reveal remnants of pioneer

Henry Yesler’s sawmill and wharf, the first industry in the area.

Both were located in the same area as the Duwamish village.

in the shallows. Ocean-going schooners also discharged ballast in

the area near Yesler’s Wharf, creating Ballast Island, a manmade

landform later used by native canoes as a landing spot. The

hulks of at least two vessels, the schooner Windward, and the

hospital ship Idaho, are buried under fill in the area. “Some

systematic digging in the vicinity of Yesler Way and Washington

Street today would undoubtedly unearth many remnants of

The potential exists for discovery of human remains in the project

area. During the construction of the World Trade Center building

found, which local Duwamish leaders said may have been part of

a burial ground.5 The building is near the current viaduct.”

No money is available to do proper historical investigation.  We are steering into a money pit.  There are good reasons, back in the day of Republican Administrations of the City, they built a viaduct passing over all these problems.   The entrance to the viaduct going north always had Indians huddled under the overpass when I was growing up.  They would drift down from Pioneer Square, to sleep under a covered area.  The shelters would not bring in men who had been drinking heavily.  My dad told me they stayed there because it was as close to their old village as they could get.  Really sad.

Indian Culture is very opposed to disturbing the dead.  It’s not that different than Israeli or Arab culture in regards to the dead.  You don’t just dig up bodies and move them.  Seattle’s early tradition chose poorly.  In the case of Volunteer Park, a dispute arose over the Capitol Hilltop location of a park.  The Park Committee wanted to dig up Washington’s Civil War and Spanish American War dead and use it for park space.  Others were morally opposed.  One Lady commented, “parks are for the living and not the dead”.  She, unfortunately, won.  We seem to have lost respect for our ancestors, for our war dead, and for those who helped build this city.  A lot of emphasis is made on respecting different cultures in this city and state.  It goes by the name of multi-cultural.  We need to start by respecting our own again.  Then, I think if as a city we want to build good relations with neighbors who have migrated, we need to show it in the planning, and in the spending of our infra-structure dollars.  There are plenty of projects in the South End that are in much more need of attention.  A bridge needs to be built.  West Marginal Way needs to be re-routed around South Park, or better yet removed altogether.  Underpasses need to be built.   A plan to annex White Center and remaining sections of unincorporated King County, will need a lot of infrastructure dollars and City facilities to bring it up to the same level as the rest of the city.  We can’t afford an exotic tunnel and seawall right now.  There are better uses for the Cities $900 million, and cities portion of state transportation dollars.

A final note about the Duwamish Tribe:

Seattle also has a terrible past and present in regards to the  Duwamish Tribe.  They owned all of the Duwamish Valley, and the Duwamish Peninsula.  It is contained in a map made by one of the Olmstead Brothers.  This cropping of the map shows a parkway going around South Park called Duwamish Hill Parkway.  It is marked on the left of the photo.  This map is in the roof deck observation tower of Volunteer Park.  The Olmstead’s believed in creating a more civil society, after having lived through the Civil War.  The road was never built, to my knowledge, but the acknowledgement of the tribe that lived there is recorded in his map.  Though the land was sold by Chief Sealth, the tranaction was never completed.  The sale called for recognition of fishing rights and land.  The payment was never met.  Seattle should thank it’s lucky star, the Duwamish are a tribe and not a bank.  The City would be foreclosed on and re-possesed otherwise.  The tribe has been  recognized by Congress once recently, but the bill vetoed by the President.  It needs to be recognized again by Congress, and this time signed by the new President. 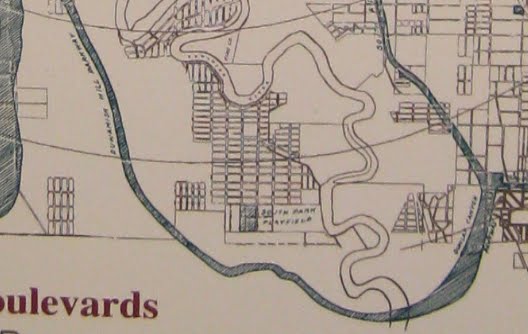