South Park Bridge: We've got enough money for a bridge!

Here is my count so far:

“The Puget Sound Regional Council has apparently made an $18 million commitment, and signed a letter supporting the county’s application for the next round of Stimulus dollars.”

King County (savings from leaving bridge as a Park)  $20 million

Selling the Strip of land between the Bridge and East Marginal Way to Boeing, instead of giving it to them.

Now I would propose we spend this money wisely.

1.We need to have a South Park Regional Authority set-up so we aren’t continually abused and ripped-off.

2.  We should build the bridge at 8th Ave.  Their used to be one there.  This would go right past the community center, and connect South Park with Georgetown more directly.  It’s a more human route.

3.  We should hire a out of state contractor, and an out of state design firm, so that our funds aren’t distributed to every old college buddy of those in power.  We can save a lot of money this way; perhaps $20-30 million dollars. 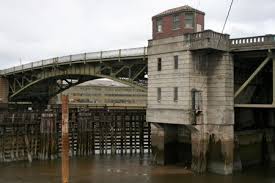