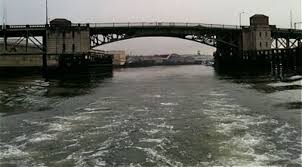 I drove down Military Road yesterday to Puyallup; or at least as close to it as I was allowed to get while in King County.  The route Starts at Volunteer park, named in honor of Spanish-American war veterans, and goes on a bee-line to Fort Mahoney in Puyallup.  It passes by many Schools, county storage lots, public storage facilities and the like.  The route is very clear if you follow previously federal government property, taken for city, municipality, county, and private use.  It’s easy to get lost on the way, as the roads are constantly interrupted, turned another direction, closed off entirely and surrounded by a fence, built on by condominiums, or left as forest.  But the real keys are this.  if lost, look into the sky for a jet taking off.  It follows the road perfectly for five miles till reaches safe elevation and it turns off east or west.  After that, find the water towers, as they are the highest points on the ridge.  It is important to understand that the entire ridge, from the Duwamish Peninsula, to the Nisqually drainage (which terminates in Tacoma), was an island that floated into what is now called Washington State.

The military started building the road once the Civil War was completed, and finished in 1873.  Road building is very expensive, then as now, and it would be in the best intersest of the government to make it as straight as possible.  Drayage was also very expensive, so it should be as easy a grade as possible, to limit the number of horses required to go over it.  Which it is, the route is perfect, and a nice grade.   One horse could pull a wagon, but up a steep hill, it required two or four.  If you started in Puyallup (Fort Mahoney) You would hitch additional horses to the wagon to get up the initial grade, then unhithch them and bring on a fresh horse at the stockade at the top of the hill in Edgewood.  The field still remains across the street from the gas station, as does the red barn for the hay, which is just north of the field.  The Red Barn was at the time part of what was once the stockade, or refuelling station for the horses.

Starting at the water tower in Volunteer Park (directly east of the old navy shipyard in Union Bay), the original road immediately passes a tycoons house, then continues down 14th Ave S through the section called Millionaires Row.  Continue down a very easy grade , through the ancient drainage (probably spanned by a bridge at the time, up part of Beacon Hill, and down till you hit Albro bridge.  Cross over the Duwamish drainage, very muddy with the Duwamish River sweeping from one edge of the valley to the other multiple times in 1873, then across the 14th Ave. or South Park Bridge.  This piece of Military and Seattle history is about to be torn down for other selfish interests this June 30th.  The original bridge had been replaced  With an opening Scherzer Rolling Lift double-leaf bascule bridge in 1931.

The road continues down 14th Ave. S till it starts up the hill.  It is then renamed Des Moines Memorial Highway.  This is in honor of WW1 veterans.

On November 11, 1921, members of the Seattle Garden Club, led by Lillian Gustin McEwan, planted 25 trees along the road, intending to establish it as a war memorial.[2] Eventually 1,100 Elms were planted, representing the number of soldiers from Washington State killed in the war.[3] (Wikipedia).

Halfway up the hill, a sign for Military Road shows up.  It is a crock, because the Military Road was taken for the Sea-Tac Airport after WW2.  The old road continues up the very even, if moderately steep grade, till it hits the north end of the airport.  Long before you actually reach the airport today, you run into north Sea-Tac Park, where the Des Moines Memorial Highway is figuratively thrown under the bus.  The Park was once a community that is “under the bus” now.  After being routed around the Park, the existing road passes by yet another community thrown under by the airport.  This one is fenced off to fight off terrorists.  At the end of this, you are re-routed again, around a third airport.  South of the airport for five miles, all communities are destoyed, fencedoff, houses removed, streets abandoned.  Along both sides of the airport are hotels, condo’s, fast food, storage buildings, hookers, crime and poverty.  The community was not like this before the airport.  It goes downhill as pressure is brought to bear to convert it to buildings that generate sales aka sales tax for all governments entities in the state.  Good news for the state, bad news for communities.  What they give back is peanuts.  The greatest revenue generators are located here, but the least is spent there.  Billions for North end tunnels or bridge; no problem.  $150 million for a poor community, that supports billionaires; forget about it beggar (South Park Bridge).

Anyway, the military road is in the center of the abandoned communities. 18th Ave. S I believe.  Once past this mess, the road is about 1/2 mile wast of Pacific hwy. S.   There is the remains of the retaining wall for a bridge on the north side of the creek that runs through the ravine, the retaining was ripped out and placed east of the north retaining, along the creek.

Once past the closed off neighborhoods, shabby condominiums and storage warehouses continue.  I moved onto Pacific  hwy after this, and continued my quest.  I am able to pick up the trail with the flight path of descending Jets, and by looking for water towers.  It is constanly interrupted by commercial space and parks.  Pac Hwy is diverted into a different highway that goes down into the Port of Tacoma.  The same was done in Seattle, where it goes on the west side of the duwamish into the Port.  Historically these were stinking filthy Ports, full of whiskey, beer and women who could be bought.  but I’ll save that for another diary.  The real Military Road picks up at a turn off for Enchanted Parkway.  The old road is now to the east of the parkway.

Now the real fun begins.  The road is now in Pierce County, and under the control of a government that respects the military, and things historic.  The first hint of a change in culture started in the city of Federal Way, still in King County, itself named after the government who funded the  highway.  Without this infrastructure the town would have never been.  The names of the streets include a brown sign under them, giving the historic names of the streets before they were changed.  Going down Enchanted Parkway, the ridges are left for the use of the People.  It is a beautiful area, that still has room for animals and farms.  It is still close to Puyallup and Tacoma, but the planners were wiser in the rural parts.  And Enchanted, Yes.  I understand now what the Bagleys, the first family to drive the highway must have felt.  Along the ridge you can see two mountain ranges, plus water on the west side.  It is like a fairy tale world.  Open flat plains of grass, Firs and cottonwoods, at the time animals in abundance.  Rabbits, squirrels, deer, occasional bear, fox and many others.  It is a wonderland.  What someone would have discovered living there at the time, is the beauty of nature, the dignity of the human soul, the rights of man.  Food would be plentiful.  Whether grain or orchard, and being the northwest, irrigation is not a problem.  Grange 266 would have represented themselves well at the County Fair.  Grainges themselves are a interesting history of a populist fightback against greedy takers, but that will have to save for another day.  It is this kind of beauty Sarah Palin sees every day, when at home, and I am sure she derives much of her politics from the earth, rather than a boardroom.  Clint Didier probably thinks the same as well.  Palin endorses NW candidates from rural parts and I, as a Westener can understand why.  But you have to get out of the city once in a while to comprehend this.  America the Beautiful , and respect for what the Earth provides. Going down the grade into the Nisqually drainage you arrive at Puyallup.  A very neat and organized town.  It retains much of it’s historic buildings.  (The road had changed to become Meridian.)  It is a far cry from South Park, but they are two ends of the same road plan the Republican Congress had for America after the Civil War.  What the two counties did with this gift is night and day, day being Pierce County.  Returning back to Seattle, it is very easy to follow the road.  It parrelels closely the military road, but you are gently ‘nudged’ east around the east side of the airport, down a grade, past Boeing, and into the pit they call downtown Seattle.  Terminating in Skid Road or Pioneer.   The County has a broader view of what is Skid Road now.  It is all of Southern King County (South Park Bridge no exception).  It is of the County Planners careful execution that the road bends this way.  If left to Republican Planners, the citizenry would always take the high road and stay in concert with the earth and the People.  Left to Democrat Planners, the road goes down into Ports and perdition.