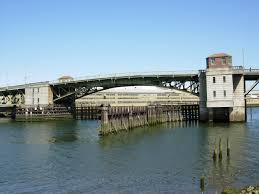 I am starting a series on South Park today.  There is a bridge that serves the Southwest section of Seattle and a isolated segments of King County.  The occupants are mostly poor immigrants of color in the South Park neighborhood.  The County, who owns the bridge, has posted signs in three languages stating the bridge will be closed June 30th. The County Executive states a new bridge would cost $150 million to replace, and that they don’t have the money.  I am going to a few places where they could find it.

This area has served as a place for getting started for immigrants from around the world from it’s beginnings.  To locals, it looks like a seedy area.  It hasn’t been like that.  There are some beautiful boulevards, and remnants of a once fine town.  What isn’t well known, is that per square foot,  more billionaires have been made in that area, than probably in any other portion of the world.  Native Seattle-ites are dying from laughter at this point.  But, with a little patience, you will see that I am correct.  With the help of online property records, I will prove my point.  I can’t do this in one diary, so it will have to come out day by day, let’s get started.

Now Joseph R McLaughlin is a well known developer to Seattle.  He developed the real estate for homes in all the best Seattle neighborhoods.  Places everyone wants to live.  See the list at the bottom.

What is not listed is the McLaughlin Waterfront.  This property is just north of the 1st Ave. South Bridge; it would have been known as the Michigan Avenue bridge.  The only property closer to the Michigan Avenue bridge was the Boeing Companies Little Red Barn and the Boeing Company administration building.  Going east over the bridge following Michigan Avenue you meet what was the old Military Road at a bridge now called Albro.  Crossing the bridge at that time, and following Military Road or 14th Avenue, you arrive at Millionaires Row.  The last house on Millionaires Row is the Home of a extremely wealthy tycoon, whose name evades me.  The road terminates at the Space Needle of it’s time, the Seattle water tower.  This was the axis point of city, a “City Beautiful” as developed by the Olmstead Brothers.  If you turn around and head back down 14th Avenue, crossing Albro Bridge again, but instead staying of turning on Military Road,  you going straight, you go directly into South Park over the 16th/14th Avenue Bridge.  At the present time, you have to go around Boeing property, but around 1908 it was a straight course to South Park.  Military Road was incorporated into the Olmstead Brothers plan.   There is a section of exposed brick from this old road on the SP side of the bridge.  Back to Michigan Avenue, and returning to Joseph R McLaughlin and Bill Boeing’s properties.  The name Michigan Avenue is deliberate.  Both men were born in Michigan.

The property has gone Out of McLaughlin family hands, through Foss Tugs,  then  the State of Washington, and on to the City of Seattle.

In 2006, a permit for $12million dollars of work to repair pilings was pulled.  The question I have, is how does this work get done on the waterfront so quickly. The application date is June 21st 2005, the approval date is August 25th 2006.  If work is done on a private home on the water, it is hell to get a permit.  I guess when a city is issuing a permit to itself, the rules, whether they pertain to federal waterways or not, are what you say they are.  In 2009, after these costly repairs and cleanup, the building (and land as well I suppose) was leased for $9 million dollars.  The County tax assessor values the property at $102 million dollars.  I am sure some of this money could have been better spent on a public bridge, and a better deal struck for the Building and facilities.

Next Diary: Bill Boeing,  and the Little Red Barn.