Replace Common Core with Common Sense. (Yes, It Can Be Done) 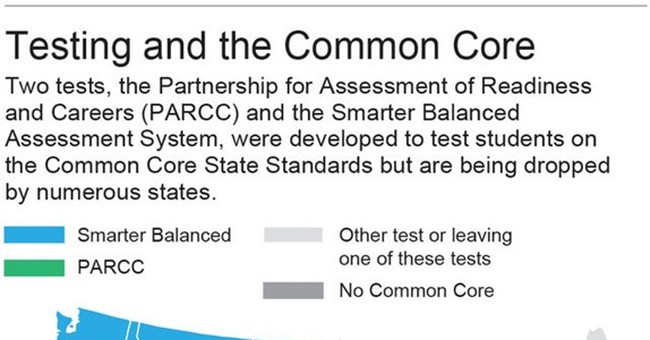 “When will time be up on the Common Core experiment?”

The Brookings Institution’s education expert, Tom Loveless, raised that pertinent question in a recent piece he wrote for the journal Education Next. In the article, Loveless laid out in great detail how the Common Core K­­–12 standards have failed miserably to raise student achievement over the past decade. You can read his strong, evidence-based article here, along with opposing arguments (unpersuasive in my view) for staying the course with Common Core.

“Experiment” is an accurate characterization of the one-size-fits-all math and language arts standards that a small group of academics and technocrats concocted in 2009–10, with lavish funding from the Bill and Melinda Gates Foundation. Posthaste, the Obama administration employed so-called “Race to the Top” grants to lure recession-starved states into adopting the Core verbatim—without knowing all (or sometimes, any) of the details and without informing parents, holding any public hearings, or inviting any legislative votes.

The elites who developed Common Core conducted zero pilot projects to show that their brainstorms about valuing workplace texts over classic literature and conceptual math over computational basics would actually achieve good results. It was an experiment, undoubtedly—with America’s schoolchildren as the guinea pigs.

Bill Gates himself seemed to acknowledge the experimental essence of the Core when he mused in an interview at Harvard in 2013 that “it would be great if our education stuff worked, but that we won’t know for probably a decade.” Sadly, the computer genius who made a fortune selling consumers products proven to work didn’t act as though parents deserved equivalent consumer choice for school standards affecting what and how their children learned.

In recent years, several governors have responded to growing parent and teacher outrage by authorizing reviews and rewrites advertised as replacing the failed nationalized standards with each state’s own version—an exercise in federalism. Unfortunately, those initiatives turned out to be largely exercises in name-changing or rebranding that left a high percentage of Common Core gospel intact.

Now, Florida, which has been a leader among states in affording parents with an opportunity to choose the best schools for their children, may be showing other states the way in the 2020s to replace Common Core with common sense and develop their own distinctive standards. Florida Gov. Ron DeSantis started the process with an executive order 13 months ago, and the State Board of Education approved a draft of the Benchmarks for Excellent Student Thinking (BEST) on February 12.

Although a year for public input and standards development seems reasonable, another two school years of transitioning to full implementation strikes me as frustratingly slow. Perhaps it takes that long to turn a ship of government-run education around in turbulent waters. Given that Common Core demonstrably is a failed experiment, though, students ought to have the benefit of a common-sense replacement before 2023. (The state is authorizing localities to speed up the process on their own, if they wish—and they should.)

There are many positive elements in the standards-to-be, which could be described as “back to the basics” with some innovative twists. Here are some:

Of course, no set of government-prescribed standards can guarantee each child will receive the kind of instruction he or she needs most. While BEST gives every indication of being better than the Core regime imposed by national power elites, many students might well flourish in schools that operate independently of state orthodoxy.

In that regard, Florida again leads the way by supporting a wide range of private and public school choices for families, a blossoming of freedom that DeSantis helped bolster as a top priority upon taking office in 2019.

Robert Holland ([email protected]) is a senior fellow for education policy with The Heartland Institute.

Biden Issues Executive Order on 'Access to Voting' — Yeah, It's Even Worse Than It Sounds
Mike Miller

Viral Video: Bicycling Thief Steals a Woman's Phone and Gets Clobbered by a Car
Alex Parker

Trump Sends Cease and Desist to RNC, NRCC, NRSC Over Their Continued Use of His Name to Fundraise
Jennifer Van Laar