Could the Middle East become "Christenrein"?

“Judenrein” was the ghastly word used by the Nazis to describe areas “cleansed” of all Jews.

It appears that there is a large and active contingent of people in the Middle East who would like to make it “Christenrein” — rid of all Christians. Catholic News Service describes the ongoing nightmare:

An Iraqi archbishop spoke of “near-genocide conditions” for Christians in his country and said those fleeing violence were straining resources in other parts of the country.Archbishop Bashar Warda of Irbil, Iraq, said part of the problem was the country’s “weak constitution, which tries to please two masters.”

“We are living in a region which cannot decide if it is for democracy or Islamic law,” he said March 16 at news conference sponsored by the Catholic charitable agency Aid to the Church in Need.

Archbishop Warda criticized “neighboring governments feeding insurgents with money and weapons to destabilize the Iraqi government” and said the rest of world’s governments had “turned their backs on us, as if the human rights abuses and near-genocide conditions Iraqi Christians experience are temporary.”

Archbishop Warda said that since the U.S.-led occupation of his country began in 2003, more than 500 Christians had been killed in religious and politically motivated violence.

Between 2006 and 2010, 17 Iraqi priests and two bishops were kidnapped and beaten or tortured. One bishop, four priests and three subdeacons were killed.

“In most cases, those responsible for the crimes stated they wanted Christians out of Iraq,” the archbishop said.

Referring to the “systematic bombing campaign of Iraqi churches,” he said 66 churches had been attacked or bombed; in addition, two convents, one monastery and a church orphanage also were bombed.

Iraq’s Christian population has dropped by more than 60 percent in the last 20 years, from approximately 1.4 million then to about 500,000 now — and even that figure is “highly optimistic,” according to the archbishop.

“The past is terrifying, the present is not promising, so everything is telling us that there is no future for Christians,” Archbishop Warda later told Catholic News Service.

Describing the situation in the Middle East as “boiling,” he said Christians in the region “expect another war” due to the instability in so many countries and the ongoing tensions between Shiite and Sunni Muslims.

“In many countries, the situation for Christians seems to be worsening, sometimes to the point that we wonder if we will survive,” he said. He added that the place of Christians as one of the original inhabitants of the Middle East had been “wiped from collective memory.”

The Chaldean Christians of Iraq are one of the oldest continuous Christian communities in the world, having common roots with the Assyrian Church of the East, which dates back to the 1st century A.D. 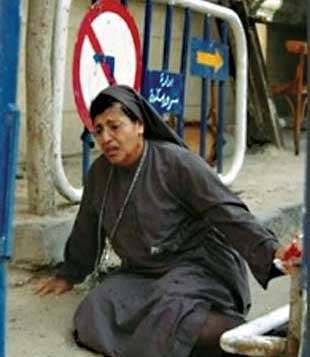 The Christian community in Egypt also dates back to the 1st century A.D. Tradition has it that St. Mark the evangelist was the first to preach the Gospel in Alexandria and founded the church there during the reign of Roman emperor Claudius, around 42 A.D. This ancient Christian community has been persecuted ever since Muslim armies swept through North Africa in the seventh century — but persecution has worsened since the downfall of Mubarak.

I wrote here several weeks ago about Egyptian Army violence against several communities of Christian monks. In that post, I expressed bewilderment as to why the Army, as opposed to the Muslim Brotherhood, would be attacking unarmed Christians. Many Christians, both here and in Egypt, had hoped that the Army might stand between Christians and the Muslim Brotherhood. We were dreaming. From the Pakistan Christian Post:

There is now no doubt there is an unholy alliance between the military and the radical Muslim Brotherhood. It has become crystal clear that the young, educated secular activists who initially propelled the non-ideological revolution are no longer the driving political force. The Muslim Brotherhood with its link to the military is now dictating the future destiny of Egypt.

The hopes and aspirations of the young protestors, that the country would embrace secular democracy after the fall of the dictator Hosni Mubarak, suffered a major setback as the country went to the polls last week to vote on constitutional changes.

The proposed constitutional amendments put to the vote [on March 19] largely dealt with the articles of the 1971 constitution pertaining to presidential elections and the president’s term in office. The changes made no mention of the notorious Article 2, which states that “Islam is the religion of the State, Arabic is its official language, and the principal source of legislation is Islamic Jurisprudence (Shariah).”

The imposition of Article 2 on the debate was for the most part the handiwork of a treaty between the Salafist movement and the Muslim Brotherhood. While the Muslim Brotherhood control the political front, the Salafist movement has become its muscle on the street, they prohibit any political opposition to a Muslim ruler. Salafists hold strict and literalist interpretations of Islamic doctrine; they advocate the full veil and open hostility with non-Muslims, particularly Egypt’s large Coptic Christian community, estimated at some 10 million. They used anti-Coptic incitement to sway the referendum. Muslim Brotherhood and Salafist’s were among the fiercest advocates of the “Yes” vote, declaring it a religious duty for all Muslims. “No” campaigners were portrayed as Christian and secularists “enemies of Islam”. Rather than confront the radicals, the majority of eligible voters abstained with only 41% of potential voters turning out for the referendum.

Pamphlets and advertisements were published, “It is ‘un-Islamic’ to vote “No”, this angered the youth who asserted, “that Islamists and Salafists were pushing their agendas through religious manipulation instead of political participation, this is our revolution and we will protest again.”

Upon the declaration from the youth, the Brotherhood quickly swung into action, to prevent further protests and demands for a new referendum on the constitution. The ruling military approved a law banning and criminalizing any future strikes, protests, marches or rallies in the country.

Not only is the Army cracking down on protesters, they made it a point — in true shariah fashion — to particularly target female protesters, as reported by human rights group Amnesty International. From Elder of Ziyon:

After army officers violently cleared the square of protesters on 9 March, at least 18 women were held in military detention. Amnesty International has been told by women protesters that they were beaten, given electric shocks, subjected to strip searches while being photographed by male soldiers, then forced to submit to ‘virginity checks’ and threatened with prostitution charges.

‘Virginity tests’ are a form of torture when they are forced or coerced.

…According to information received by Amnesty International, one woman who said she was a virgin but whose test supposedly proved otherwise was beaten and given electric shocks.

Since shariah requires violence against women, I guess we shouldn’t be surprised. What did surprise me was how quickly the Egyptian Army has moved to appoint itself the enforcer of shariah law.

And since shariah also requires persecution of non-Muslims, it was only a matter of time (but how short a time!) before we started seeing stories such as this one, from International Christian Concern’s blog Persecution.org:

Christian protestors who staged a nine-day sit-in calling for the rebuilding of a church torched by Islamists have come under attack by the Egyptian army.

According to a news release from Barnabas Aid, the demonstrators were reportedly shot at and struck with electric batons outside the state television headquarters in Maspero, downtown Cairo. Fifteen suffered injuries, including broken limbs, head wounds and burns.

The assault happened in the early hours of March 14 – two hours before an agreed suspension of the sit-in. Representatives of the demonstrators had met with Egyptian Prime Minister Essam Sharaf and members of the military council the previous afternoon to discuss their demands.

Barnabas Aid reported the army has said it will rebuild the church in Soul, which was destroyed on March 5. The demonstrators agreed to suspend the sit-in until March 25 to give the government time to fulfill its pledges.

Around 500 people were still at the site when military forces smashed the demonstration in the early morning hours. Barnabas Aid reported one of the organizers said the soldiers cut the wire fences and started running towards the people, shouting the Islamic war cry “Allahu Akhbar” (“god is great.”)

Thousands of Christians took to the streets of Cairo last week in protest over the attack on the village of Soul, 30 km from the capital, where Christian homes were targeted and the church destroyed by a mob of nearly 4,000 Muslims.

Barnabas Aid said on the evening of March 8, a Muslim mob attacked the Christian demonstrators around Mokattam [a garbage-collectors’ village; see my post about this inspiring community here], resulting in deadly clashes. Thirteen people were killed and 140 wounded. Witnesses have since said that they saw people being killed by the army, who were firing shots apparently to control the riots.

Every day that goes by demonstrates increasingly how mistaken we were to think that the Egyptian Army would be independent of the Muslim Brotherhood, much less a restraining influence on them.