It's a great day to be a Muslim Brother!

Friday was indeed a great day to be a Muslim Brother. Yusuf al-Qaradawi, spiritual leader of the Muslim Brotherhood and the most influential Muslim scholar in the world — looked to by most of the world’s Sunni Muslims for guidance about their faith — has made a triumphal return to Egypt. On Friday, Qaradawi spoke to hundreds of thousands (estimates go as high as a million) of cheering supporters in Tahrir Square, which has been the center of the Cairo protests. Over the decades, Qaradawi has inspired countless radical Muslims including, although he officially renounces them, Osama bin Laden and al-Qaeda. From the Investigative Project on Terrorism:

Qaradawi, who has lived in Qatar since 1961, was a vocal critic of deposed Egyptian President Hosni Mubarak. A profile this week in Germany’s Der Spiegel called him the Muslim Brotherhood’s “father figure”….

It won’t be the first time Qaradawi has been back to Egypt, but his visits have been fleeting. A sermon from him on the first Friday after Mubarak’s ouster could be hugely symbolic as the Brotherhood tries to exert influence over the direction Egyptian society takes. And it will trigger memories of the 1979 Iranian revolution, which took a dramatic turn when Ayatollah Ruhollah Khomeini returned from exile in France….

The Der Spiegel profile notes Qaradawi’s enigmatic nature. Hailed as a moderate for opposing al-Qaida and embracing modern technology, he has called on Allah to kill “the Jewish Zionists” and spoken “about the right of Palestinian women to blow themselves up.” He has been barred from entering the U.S. since 1999, the profile said.

In the past two years, he also has:

According to MEMRI, Qaradawi gave his followers some red meat about Israel on Friday:

In a special mention of the Palestinian issue, Al-Qaradhawi asked the Egyptian army to open wide the Rafah crossing and to pray for the re-conquest of Jerusalem by the Muslims, so that he and the Muslims could pray in security at Al-Aqsa Mosque. This part of his sermon was cheered and applauded by the crowd. [emphasis added]

Remember, this is what the Ikhwan [Muslim Brotherhood] says before it’s in power, before it has its Islamist hands on the levers of state control, before it can command the police or the army.

What do you think the Egyptian situation will look like this time next year? Or in five years’ time?

Well, whatever it looks like, the United States will have helped to get it there, according to this news from Reuters:

The United States will spend $150 million to assist Egypt’s democratic transformation after the ouster of President Hosni Mubarak, Secretary of State Hillary Clinton said on Thursday. “It’s very clear that there’s a great deal of work ahead to ensure an orderly, democratic transition. It’s also clear that Egypt will be grappling with immediate and long-term economic challenges,” Clinton told reporters after briefing lawmakers on Capitol Hill.

“I’m pleased to announce today we will be reprogramming $150 million for Egypt to put ourselves in a position to support the transition there and assist with their economic recovery,” Clinton said….

Clinton said Bill Burns, the under-secretary of State for political affairs, and David Lipton, a White House adviser on international economic affairs, would travel to Egypt next week to consult with various stakeholders on how too use the funds. 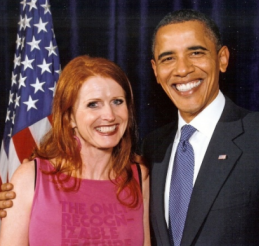 “Various stakeholders”? Does anyone seriously think that those won’t include the Muslim Brotherhood radicals who’ve been meeting for over a year with Obama’s good friends Bill Ayers (co-founder of the Weather Underground communist terrorist group) and Jodie Evans (leader of Code Pink, which has met with the Taliban and aided terrorists in Iraq)?

As for the $150 million, “funds” is just another word for “money extracted by force from U.S. citizens” — i.e., our tax dollars at work. It’s what Barack Obama likes to call an “investment.” Do you suppose the Muslim Brotherhood will remember to thank us?

Of course, we’ve been giving money to Egypt for decades, but that was when Egypt was an ally of both the U.S. and Israel. According to the Washington Times,

The U.S. armed forces are entwined with Egypt’s military more than with any other Arab country’s. But if Islamists seize Cairo, as the mullahs captured Tehran, this complex relationship unravels.

“Let me count the ways,” said Ken Allard, a retired Army colonel and military analyst. “They are our biggest strategic partner in the Middle East. At that point, you’ve lost your biggest Arab partner. Geostrategically, the mind boggles.”

The U.S. Navy would not be able to use the Egyptian-run Suez Canal. The 150-year-old waterway sharply reduces sailing time for Atlantic-based carriers and other warships going from the Mediterranean to the Red Sea and Persian Gulf, and to wars in Iraq and Afghanistan.

The Air Force likely would lose overflight rights into the Middle East, and the Army would lose a partner in building the M1A1 tank….

The U.S. also has been working with Egyptian forces to stop the smuggling of arms into the Hamas-controlled Gaza Strip.

A Cairo run by Islamists likely would end such operations and develop close ties with Hamas, a U.S.-designated terrorist group that calls for the destruction of Israel….

The CIA, too, would lose a valuable partner. It operates a robust station at the U.S. Embassy as well as classified bases. The [U.S. and Egyptian] governments exchange information on terrorism suspects….

One of the first acts by Muslim Brotherhood [sympathizers] in the current crisis was to storm prisons and release accused terrorists, some of whom belong to Hamas.

“The biggest threat is that rather than having an ally in Mubarak, who has helped keep a lid on radical jihadists in Egypt at this pivotal crossroads, you may have a government that facilitates radical jihadists throughout the region and as a potential export location to other parts of the world, primarily into Europe,” said [Rep. Pete] Hoekstra [of the House Select Committee on Intelligence].

Thanks in large part to U.S. military aid (approximately $1.3 billion a year), Egypt’s armed forces are the largest in Africa, the largest of any Arab country, and the 10th-largest in the world. All of which could fall into the hands of the Muslim Brotherhood — soon.

If it does, you can thank Jeremiah Wright’s most famous disciple, the man that Jew-hater extraordinaire Louis Farrakhan once described as the “Messiah.”

Cross-posted at West to the West Wing