In Egypt, Christians fear the same fate as Iraqi and Lebanese Christians -- or worse

Catholics and Eastern Orthodox Christians have been split for nearly 1,000 years — but in Egypt, tragically, they are united in suffering — now so more than ever. Via Catholic Online, the Catholic News Agency reports  [boldface mine, throughout]:

As the U.S. urges Mubarak to step down, Egyptian Christians worry that radical Islamic ideology may fill a void left by his absence.

Issam Bishara, Vice President for Pontifical Mission activities in Egypt, detailed the concerns of Coptic Orthodox and Catholic Christians in a Feb. 3 report provided to CNA by the Catholic Near East Welfare Association.

“Though some of the primary opposition leaders in this revolt appear to be modern secular reformers, church leaders believe the main engine fueling and organizing the demonstrators is the Muslim Brotherhood,” Bishara wrote. “They fear that the brotherhood intends to seize power through future elections, compromising all patriotic and ideological parties participating in the protests.”

So far, most of the demonstrators opposing President Mubarak have kept religion out of the picture. However, the prominent role of the Muslim Brotherhood – considered to be the best-organized opposition to Mubarak’s National Democratic Party – is causing concern among Egyptian Christians.

The group’s stated aim is to make Islam the “sole reference point” for Egypt’s government and society.

That aim is entirely in keeping with the Muslim Brotherhood’s motto: “God is our objective; the Koran is our law; the Prophet is our leader; jihad is our way; and death for the sake of Allah is the highest of our aspirations.”

“Coptic Christians – as well as Egypt’s Armenian, Greek Orthodox, Latin, Maronite and Melkite Greek Catholics – all fear a fate similar to that of Iraq’s Christians,” Bishara stated, recalling how a power vacuum in that country “left its minorities, especially the Christians, marginalized and exposed to the terror of Islamic extremists and criminals.”

Indeed, it is estimated that from 40% to 60% of of Iraq’s Christians have fled in recent years. This is part of the more general problem of the vanishing of Christians from all over the Middle East. Four-fifths of Lebanon’s Maronite Christians have emigrated in the last 50 years, though they were once the majority population in Lebanon. The Christian populationin the Palestinian Territories has dropped precipitously because of outmigration. And in a part of the world where people of every religion have much longer memories than their counterparts in the West, the Ottoman Turks’ genocide of approximately 1.5 million Armenian Christians between 1915 and 1923 continues to cast a long and palpable shadow. Christians in Egypt couldn’t help but be nervous, even before the street protests began. According to CNA, 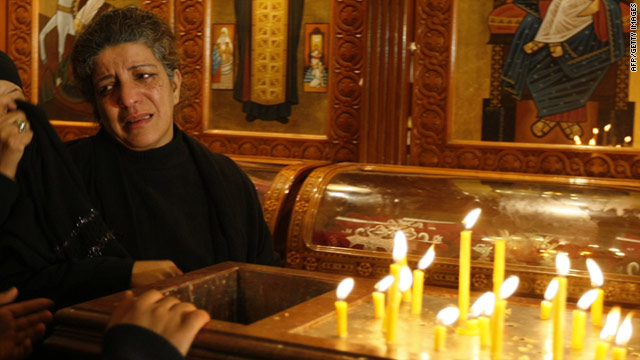 Anxiety was already running high among Egyptian Christians, after a Jan. 1 church bombing that killed or injured more than a hundred worshipers. On Jan. 24 – one day before protests broke out against President Mubarak – a report by Human Rights Watch detailed “widespread discrimination” against Christians, who comprise about 10 percent of the 90-percent Muslim nation.

The Muslim Brotherhood officially describes itself as a non-violent movement, and has stated its commitment to democracy. But the brotherhood’s connections within the Arab world have caused many to question its professions of peace. Its historical role as the source or inspiration for virtually every radical Islamic political movement now in existence is well-established.

Hamas and al-Qaeda, for example, are both offshoots of the Muslim Brotherhood — a fact that is frequently ignored by the same people who ignore the fact that, in the words of the Team B II report Shariah: The Threat to America, “nearly every major Muslim organization in the United States is actually controlled by the Muslim Brotherhood or [one of its] derivative organization[s].”

Nina Shea, an international human rights lawyer who directs the Hudson Institute’s Center for Religious Freedom in Washington, D.C., urged Westerners to regard the Muslim Brotherhood with extreme caution – both on account of the group’s history, and because of the recent trend toward radicalization in Egyptian religious culture at large.

“The Muslim Brotherhood started off in Egypt, during the 1920s, with violent tendencies and violent tactics,” Shea recounted. “It shifted those tactics, as it was repressed, to moderate ones. In other places where it flourished – like in Gaza, or Sudan – it’s been anything but moderate.”

The Muslim Brotherhood, in choosing to be more “moderate” when it’s in a less powerful position, then turning more violent once it has control, is merely following the example of Muhammad, who preached tolerance in his earlier days, when he and his followers were at a disadvantage, but then, once he was in the ascendancy, turned very violent indeed.

“[The Muslim Brotherhood is] very tactically-minded,” [Shea] acknowledged. “In the short term, for tactical reasons, I would expect them to be moderate. But in the medium-term, they would revert to their roots” – including their core principle of imposing Islamic law throughout Egypt.

Westerners who choose to support the protesters unreservedly are playing “high-stakes poker,” Shea said – and should take into account that no popular uprising in the Middle East has ever resulted in a more democratic or pluralistic system of government.

“There are no precedents for it,” Shea said. “On the other hand, there is the precedent of Iran” – where the 1979 populist revolt, against a U.S.-backed authoritarian leader, ended with his replacement by the Ayatollah Khomeini and the nationwide institution of Islamic law.

In the event of a takeover by the Muslim Brotherhood, she said, Christians could expect to live as “dhimmis,” a traditional Islamic designation that strips non-Muslims of many legal protections.

In this arrangement, Shea explained, the government does not need to terrorize Christians at any official level. Rather, officials can simply ignore, or even tacitly permit, religiously-motivated violence and repression by other segments of society.

About two-thirds of Christians in the Middle East now live in Egypt. For this reason alone, Shea said, a takeover by the Muslim Brotherhood could have drastic consequences for Christians throughout the region.

“We could see the virtual end of Christianity’s native presence in the Middle East, faster than anyone thought, if they come to power.”

Regardless of how much we might prefer to think of the Muslim Brotherhood as a fringe group without popular support, public opinion polls give us reason to worry. Infidel Bloggers Alliance reports on a Reuters survey of 1,000 Egyptians — taken last April and May, i.e., long before the current crisis — that seems to offer good news and bad news. On the one hand, 59% said democracy was preferable to any other form of government, and 61% are concerned or very concerned about Islamic extremism in Egypt. On the other hand, 85% say Islam’s influence on government is a good thing, 82% believe adulterers should be stoned, and 84% believe Muslims who leave Islam should face the death penalty. In other words, a large majority of Egyptians surveyed have views quite consonant with shari’a law.

So, as Israelis shudder at the possibility of the largest Arab nation in the world taking up arms against them for the first time in decades, Christians within Egypt itself wonder if they could be the next group of Middle Eastern Christians to face effective expulsion, or death.