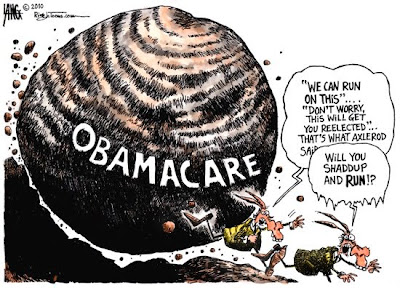 For President Obama, Obamacare is just one more hammer in his toolbox to use in order to try and incite class warfare and polarize the country ahead of the 2012 presidential election!

A divide and conquer technique that is certainly unbecoming of the President of the United States.

At the same time we, his mere subjects, are not running for reelection but merely trying to get by in an economy this “leader” is doing little to improve. In reality it is quite the contrary up to and including a national energy policy that prohibits drilling on large swaths of land that has many of us paying north of $4.00 a gallon at the pump.

At the end of the day if Obamacare and its individual mandate is upheld by the SCOTUS (who is hearing arguments today), it would be one more very large nail in the economic coffin of the United States!

Read the rest of the article and watch the video at The Political Commentator  here.