One Disastrous Term Wasn’t Enough For Jimmy Carter To Establish His Legacy? It was For Me And I would Venture To Say Most Everyone Else As Well. 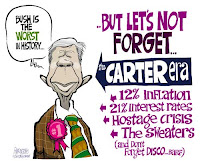 No, this former peanut farmer from Georgia wants to make sure that his name goes down in history as a destructive career diplomat as well, both foreign and domestic. His current diatribe concerns the fact that any criticism of the new administration must have its foundation in racism. While blatantly untrue, why is this ex-President playing the race card, particularly when it is so far off base? Why is he making statements at all?

Knowing the record of this man, why is his voice one that is getting, or deserving of, any attention.

His Presidency Was Marked By Economic Woe And A Degradation Of United States Standing In The World. His Post Presidency Record, Save Participation In Habitat For Humanity, Has Not Been Much Better

So what is his agenda invoking the race card? Stupidity or wanting to deal a blow to the Obama administration? Most likely the former as his goal was in no way to hurt the President, particularly at this critical time in his healthcare bill negotiations. But as this former peanut farmer showed while in office and after, conflict resolution may not be his strong suit.