Ahmadinejad On al-Quds Day: "The Holocaust Is A Lie"

Do We Really Want To Negotiate In Good Faith With This Guy? Won’t The Negotiations Be Short One Serving Of Good Faith? 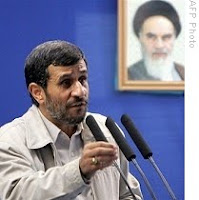 On September 15th I posed the question: What is the purpose of the nuclear ambitions talks planned with Iran on October 1st? This was my hypothesis at the time:

“So What Will It Really Mean?

In diplomatic speak, they have bought themselves time to maintain the status quo. While supposed negotiations go on, Iran will have the unfettered ability to continue along on its merry way, while the United States and its allies have achieved the appearance of action, while the stalemate with this rogue nation continues.

But is it really a stalemate when one side continues doing exactly what they want, and the other side, save using force, is powerless to stop them? These guys will be dancing while Rome burns. There is a great deal at stake here, and politics is not one of them.”

(VOANews) “…In his address to the country Iranian President Mahmoud Ahmadinejad has again called the Holocaust a lie by western nations designed to create a pretext for the creation of the Jewish state of Israel.

The Iranian president called the Holocaust a myth and an unprovable lie designed to promote support for Israel.”

This on the day after the United States decided not to pursue our missile defense plans in Poland, and while Iran is one day closer to developing the bomb (if they haven’t already) and the capability to deliver it a very long distance. The Iranian intent is fairly clear to anyone with eyes and ears, so what exactly is our plan?

As I had opined only 3 days ago, Israel, the country with the most at stake in the short-term, will be hung out to dry by the world community, forced to do unilaterally what should be done multi-nationally. Israel, who will have done the dirty work, will no doubt be condemned by the world community it had protected as a by product of preserving its own very existence.

When will the world leaders, led by the one great superpower, step up and make the difficult choices necessary to stop the terror that rogue nations such as Iran and North Korea along with organizations like Al-Qaeda are trying to perpetrate? Or will we just go through the machinations and pretense until it is to late?

We need a great leader to step up and to worry about global issues as much as, if not more than domestic ones.