The Healthcare Public Option And Other Short Stories

A Rose By Any Other Name Or Speak No Evil, See No Evil, Hear No Evil 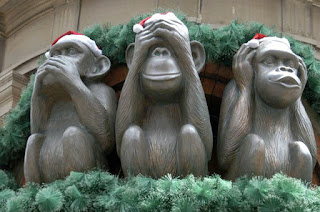 Things have been a little quiet on the healthcare debate front over the past day or two, but the 800 pound gorilla is still in the room and is still very much alive and well. During this short lull I wanted to take a look at the critical public option piece for the program, and the fact that it is apparently losing its luster with many on the near left as a it remains a huge impediment to any legislation having a chance of being passed. And not getting something passed will doom the democrats in mid-term elections.

We have had the discussion many times regarding the fact that government cannot efficiently or successfully run simple programs (cash for clunkers) as well as the more complex (FDIC,Social Security, Medicaid, USPS, Amtrak). The potential for Uncle Sam to take such a huge, incredibly complex and incredibly important piece of society as healthcare and run it in any way that is even close to the private sector is zero. And we, the people will be the ones holding the bag whether it is through a loss of top doctors, long waiting periods for what we now consider to be routine care and the potential for rationed care where the government will decide basically who should live (by getting treatment) and who should die (by not getting treatment).

Does that mean a government run option is off of the table? Not exactly. Even if the public option per se is not included in the verbiage of any new proposal from the democrats, stay vigilant and watch for the public option trigger. This seemingly benign label in reality depicts a backdoor way into the original intention of government control.

The Democrat’s, since the Joe Wilson outburst during the Obama infomercial last week, have tried to turn it around and attempt to show that it is actually the Republicans that are less than total truth tellers.

In Townhall today John Hawkins wrote a great piece on 10 “You Lie” moments in the debate on healthcare. They are very interesting, and extremely telling. Here they are:

3) The public option won’t put the insurance industry out of business and lead to a government takeover of health care: Of course, it will. That’s the whole purpose of putting it in the bill. Don’t take my word for it, listen to Barney Frank explain it in his own words.

4) Medicare won’t be cut to fund this health care bill: Actually, there are $500 billion in cuts to Medicare planned to help pay for this bill.

5) The health care plan won’t add “one dime to our deficits either now or in the future.” There is simply no bill that fits that description winding its way through Congress. According to the neutral Congressional Budget Office, the House bill adds $220 billion to the deficit over 10 years — and even those numbers rely on very unlikely streams of revenue coming into the program. Moreover, the CBO only estimates numbers 10 years out. Over the long haul, all evidence points to costs skyrocketing into the stratosphere just as Social Security and Medicare have over time.

6) Preventative care will be required in these bills and it’ll save money: Studies show that preventative care increases, not decreases costs. That’s not only because of the cost of the tests, but because it leads to large numbers of people being treated for potential problems that would never end up coming to fruition.

7) Health care reform will help create more jobs: That’s simply not true. According to the Natural Federation of Independent Businesses, this health care bill would wipe out 1.6 million jobs.

8) Abortion won’t be covered under the bill: Unless the bill specifically says abortion isn’t covered, it’s covered by default. Abortion is not mentioned in the House bill and thus, is covered.

9) This bill won’t lead to rationing of health care and people being denied life saving operations: Of course, it will. Barack Obama himself has even alluded to it with his famous, “Maybe you’re better off not having the surgery, but taking the painkiller” quip. In nations like Canada and Britain, long waits for surgeries and people being denied proven life saving operations for financial reasons is commonplace. How can anyone believe that we’re going to copy their system and not have the same result?

10) Obama’s “Plan” doesn’t have these problems you’re talking about: Obama hasn’t submitted any sort of plan to Congress. In other words, there is no special Obama plan. His only “plan” is to sign anything that Harry Reid and Nancy Pelosi can push through Congress.”

The American public has to remember that it is not the people who talk the loudest or most often that are always correct in what they say. Many times it is the exact opposite. The democrats have the control, for now, of the bully pulpit in the form of the airwaves. But access does not always mean the truth.