Nuclear Talks With Iran: What Could The Agenda Be? 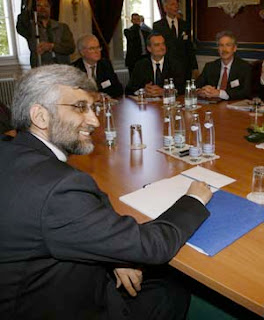 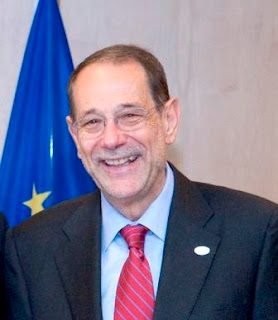 Why Are These Guys Smiling?

Coming as little surprise to most logical thinkers, Iran has agreed to talks with the EU on October 1st regarding its nuclear ambitions and ongoing program to enrich uranium. Why wouldn’t the Iranians agree to talks? They understand how the game is played with governments around the world who recognize the dangers they pose, but who have very little political will to do anything about it.

If you listen carefully you can hear these protecters of freedom around the world whisper, “I just hope nothing happens on my watch.” These are your representatives tasked with protecting the free world from a nuclear holocaust. Much like the mayor who doesn’t paint the bridge, because if it collapses when the next guy is mayor, it’s the next guys fault, heads of state I fear think the same way! Hard to believe they can think in those terms when it comes to a potential nuclear calamity, but politicians will be politicians, extremely reluctant to ever be proactive, with the exception being when the polls tell them to be.

The Iranian nuclear chief had this to say in Vienna at the IAEA conference: (AP) “…In blunt criticism of the U.S., he accused Washington of amassing “frightening and dreadful weaponry in … the Persian Gulf” in the pretext of acting in America’s national interest while denying Iran its right to develop enrichment for peaceful purposes…”

What exactly will the agenda be for the October meeting? The last talks with Iran failed over a year ago due to its’ refusal to put its uranium enrichment program on the table? That same problem exists today. What has changed to create a scenario for this meeting to end with a nuclear free Iran? Not much. So why is it taking place?

This talks are set to be between EU foreign policy chief Javier Solana and Iranian nuclear negotiator Saeed Jalili, although it is assumed that representatives from the U.S., Russia, China, France, Britain and Germany would be present. Likely outcome? That these discussions will lead to a framework for more discussions down the road, that will in turn lead to more discussions after that.

It will be announced with excitement and fanfare at the news conference after the meeting is done, that substantive talks were held, that a vague understanding of some kind had been reached, and that these are very positive steps. The two will appear smiling and shaking hands, answering direct questions with politician like non-answers.

So What Will It Really Mean?

Let’s see. Iran still formally refuses to discuss the enrichment issue. Iran has warned the United States and Israel against any military actions to take out nuclear program installations. Speaking at the IAEA conference in Vienna, Jalili said “This hovering of threats achieves nothing but adding to my great nation’s determination and solidarity,”

So Why Are These Guys Smiling?

In diplomatic speak, they have bought themselves time to maintain the status quo. While supposed negotiations go on, Iran will have the unfettered ability to continue along on its merry way, while the United States and its allies have achieved the appearance of action, while the stalemate with this rogue nation continues.

But is it really a stalemate when one side continues doing exactly what they want, and the other side, save using force, is powerless to stop them? These guys will be dancing while Rome burns. There is a great deal at stake here, and politics is not one of them.

One wild card remains, which is Israel being forced to do the worlds dirty work, with the world then most likely taking the position of condemnation. Israel for one does not have the luxury of pretense, as its very survival is on the line every day.