The IAEA: Whatever Are We To Do? 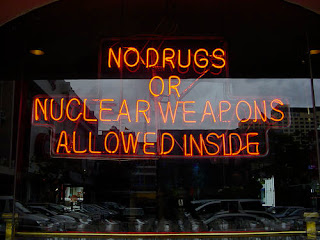 I Think This Situation Even Supersedes The Health Care Debate, Because Health Care Will Not Matter During A Nuclear Winter

Sequel To The Iranian Nuclear Situation

As mentioned yesterday (Iran and North Korea: Welcome Back My Friends To The Show That Never Ends), the Iranian nuclear weapons development situation is extremely disconcerting for the entire world. In addition, Iranian leadership says that they have no intention of stopping.

Fast forward one day, and the following statement by Glyn Davies, United States chief envoy to the IAEA on the subject of Iran. They are he says, moving: “closer to a dangerous and destabilizing possible breakout capacity,…”

The response from our allies Britain, France and Germany? Predictable. They urge Iran to engage in meaningful negotiations so as to come to a diplomatic resolution.

As I said yesterday, to attempt to have sane negotiations with the insane is not possible. However, the definition of insanity is to engage in the same behavior as before and to expect a different outcome. From that perspective, perhaps we as well as our European allies also insane, which would mean that we would be negotiating on a level playing field. How sad.

In addition to the bold threat disguised as urging by these three countries, Britain, France and Germany also term Iran’s refusal to be transparent and co-operative in clarifying outstanding issues as “further reinforcing doubts” and was “inexcusable.” (CBC) Inexcusable?

Like not washing your hands after you go to the bathroom or not replacing the toilet paper roll when it is finished? Those things are inexcusable. I think the Iranian situation might get to a different level.

That Loudmouth Troublemaker Is An FBI Snitch
Townhall
'Limousine liberal' Sen. Sheldon Whitehouse defends his membership in an all-white beach club
Twitchy
Bill Maher Torches California for Its Heavy Regulation
Redstate
Is Pennsylvania on the Verge of a Forensic Election Audit?
PJ Media