By GordonTaylor | Mar 10, 2011 8:36 AM ET
Share Tweet
Share
Tweet
The Peoples Bank of China has announced their 12th five year plan, and it doesn’t include the dollar. Look at this just released article in Spiegel.

The Chinese central bank surprised with a spectacular announcement: The would-be superpower wants to handle their entire future foreign trade in yuan, not in dollars. Beijing shakes America’s claim to represent the key currency – with serious consequences for the U.S..

The announcement was inconspicuous , but it has the potential, to permanently change the balance of power on the world currency market: China strengthens the international role of the yuan. All exporters and importers will, this year, be allowed to settle their business with their foreign partners in Yuan, the central bank said on Wednesday in Beijing.

This will respond to the growing importance of the yuan as a global reserve currency. "The market demand for cross-border use of the yuan rises," said the central bank. The PBoC had previously tested this plan by allowing 67 000 enterprises in 20 provinces to run their business abroad in yuan. The trade volume amounted to the equivalent of €56 billion.

Now the amount of yuan to be extended, it should be handled much more business in Chinese currency – and less in the U.S . Chinese companies trade at present often in dollars, they are thus dependent on the decisions of the U.S. Federal Reserve to pay on it in a rising oil price and will have pay higher transaction fees than necessary. That should change now.

Currently, the People’s Republic can hardly take yuan out of the country and even that is monitored within the boundary of all legitimate capital flows. Chinese exporters have to change a large part of their euro, yen or dollars at a fixed rate revenue in yuan. Foreign companies wishing to do business in China must do so in Yuan, they can exchange their money in the People’s Republic. Tourists are allowed a maximum of 20,000 yuan and exporting. Yuan an international market can not occur – and not on supply and demand-based exchange rate.

Previously (just last week) China announced that it would allow the settlement of trades across it’s borders in Yuan by the end of this year. Bold moves to make their currency the reserve currency only increase pressure on the already faltering dollar.

There is no doubt that China has dealt the knockout punch to the dollar and it’s time has past. The dollar has been fighting a defensive fight for several rounds now, unable to throw a single punch. Now in the 12th round the poor punch drunk dollar can hardly hold it’s hands up in defense. China can now land punches at will and in very short order Ben Bernanke will throw in the towel.

Here is the original article from the PBoC website. 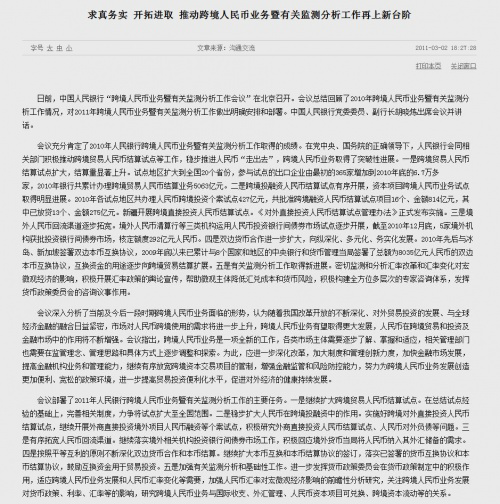