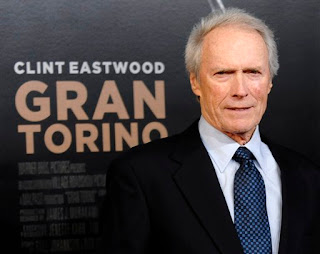 To my Conservative Friends:

I have been receiving emails and phone calls over the past week from my Conservative and liberal friends alike saying to me – “Mike – You gotta see Gran Torino!!”

So, in the middle of the snow storm on Saturday night, I trekked out to see the film I had heard so much about…

The film is about a man named Walt Kowalski, a 70-something, cranky Korean War Vet who lives in a mid-west neighborhood that has been steadily changing to a Black/Asian community. Walt, living alone now after his wife’s death, is one of the last “white guys” in the community and is an extremely old-school guy with a very, very non-Politically-Correct attitude and he doesn’t give a shi- who knows about it.. In fact, I don’t think Walt ever heard of the term “politically correct”.

Those of you who regularly read my articles know that I usually find movies on TV and Hollywood are inappropriate and support the liberal agenda in every way shape or form. And I usually don’t like any movies I see because I can’t stand the inevitable, inherent liberal slant..

Simply said, it was one of the best movies I have ever seen, period!!

Never have I been so entertained by a drama from a Hollywood film. It had just the right mix of humor, emotion and action. I was never bored and when the movie ended, people did not want to leave. They just hung around the theatre talking amongst each other about the film!!! And I live in NY – People here can’t stand each other and usually want nothing to do with each other….. But Gran Torino stirred such emotion, such debate that people needed to speak about it…

Let’s take a look at the trailer for the film:

The trailer shows some of the movies most publicized and intense scenes that are full of action and suspense. However, these are clearly not the best scenes in the movie. The best scenes and lines in the movie are Eastwood’s interaction with his neighbors, friends and family. From his snot-nosed dis-respectful grandchildren to his clueless kids who treat him like an idiot when it is they who are the idiots.

Every scene is great and has you glued to the screen as you hope the movie never ends.. Every line Eastwood delivers is chock-full of wit, sarcasm and occasionally, you see Walt’s soft side coming through his steely demeanor… I found myself, as well as others in the theatre, laughing out loud with Walt as he verbally decimates everyone he talks with… As we all know, men love to quote movie lines… It drives our wives and girlfriends nuts… But there are so many great lines Clint has in this movie that will add to his legendary quotes like “Go ahead, make my day” and “Do you feel lucky punk?”

Usually when you see a movie, you forget that you saw it within a few hours. Gran Torino is a movie that I am still thinking about for 2 days now… I can’t get the plot and the characters out of my head. This film should be considered for Best Picture, Director and Best Actor. However, I am sure it won’t be because Eastwood, a Republican, is not your typical Hollyweird liberal and the movie portrays a Conservative as the hero and Hollywood abhors anything that makes Conservatives look positive….

My liberal friends wanted me to see it because, as typical libs, they see this film as a Conservative guy who is racist, homophobic, insensitive and should be ostracized from the community… They think it shows liberalism in a good light… I think the opposite. I think it shows that we need strong leaders who take charge and are not afraid to “offend anyone” and its shows liberalism as a failed social experiment that should be abandoned once and for all…

My Conservative friends and I see this film as a refreshing, liberating breath of fresh air that reflects the PC world in which we live today as so far off the rails that we have to slap these people into reality and this film is a great symbol of that sentiment.

I believe Gran Torino shows us that just because we all have tendencies not to trust or dislike a particular ethnic group, be them Black, Hispanic, Asian, Jew or whatever, it does not make someone racist. Funny, in this country, you can have convicted felons, drug-addicts and the like garner more sympathy and given chance after chance, but once someone makes a racial slur and is branded a racist, they are ostracized and treated like a lepers…. Everyone kill the raaaacist!! Heaven’s nooooo!! He offended me me with a slur!!!! Lock him up!!! 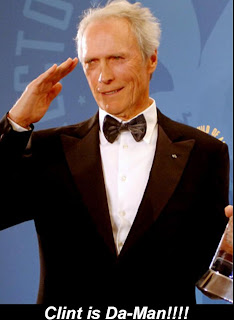 Maybe this film will not change any minds or move public perception that we have to cut this PC crap out, but at least its the first film in a long while a Conservative can enjoy and not have to maul the screen with their Milk-Duds….

So, in summary, put Gran Torino on your must-see list. You will be entertained, you will laugh and you may cry… It will probably be Eastwood’s final film in a glorious career that should end with his first Academy Award in, what is arguably, his best performance ever…