The Liberal "Wild" Card is the "Race" Card 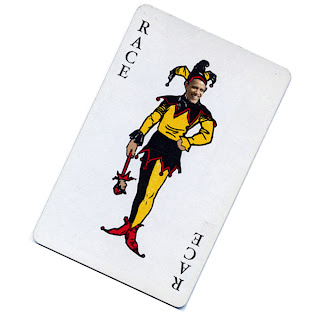 There are a bunch of things that I want to address in this post regarding racism in this political season, so I will try my hardest to point things out and not ramble on and on. If the candidates were playing poker with the race card, Obama would have a royal flush.If you watch the news, on any given day, the reason why this presidential race is so close is because of Obama being black. Really? I had mentioned in my previous post “Vote republican, I dare you…racist!” that there is a laundry list, and a dirty one at that, not to vote for Obama. Yet, the campaign and media seem to being doing their hardest to point out a low percentage racism. When they are not doing that, you can find them attacking middle class American citizens for asking direct, not softball, questions of Obama. How dare you ask a question!? We are just supposed to casually go along with the new New Deal.

I have a challenge for all the liberals out there, I want you to watch the video I have below and then tell me in the comments where this “talk” is coming from. Sure, the republican campaign and ticket point out that Barack is inexperienced but I listen to Glenn Beck, Rush Limbaugh, Sean Hannity and Fox News all the time and I have NEVER heard them bring his race into the picture as to why we shouldn’t vote for him. So here is my challenge, within the campaign or of the candidates or even the prominent talk radio shows, find me documented evidence of this type of racism that is referenced in this video of the MULTIPLE times he has accused the right of it:

6% of the total vote will be effected by racists in this country. Professional pollers are saying that even that is a stretch because the “Bradley effect” is something that happened closer to segregation and today has little effect. So maybe 3-4%?

Let’s flip the coin and look at the other side, how many will be voting for Obama BECAUSE he is black. It is actually hard to tell and I’m sure we can’t get a poll because no one wants to really admit to that. One way you can tell however is by asking people how they feel about a candidate and kinda shake it out of them. This is exactly what Howard Stern’s show did with a couple on-the-street interviews that really show what’s going on out there. Listen:

To top this all off, here in Pennsylvania, a major battleground state, you somehow have Obama in a SLIGHT lead after referring to those that will not vote for him as “Bitter Americans who cling to their guns and religion with antipathy for those who are not like them”. Head on out to western PA and you have Democrat Representative John Murtha saying that Obama will have a problem with the racists in his section of the state, clarifying that by saying that what he meant was that the area is full of rednecks, backing that up by saying that it is mainly the old people. Good job John, you just stabbed the backs of your constituents by calling them old racists rednecks.

Let’s head back to the campaign itself with Mr. Foot-in-the-mouth himself, Joe Biden with his previous comments about Barack saying “I mean, you have the first mainstream African-American who is articulate and bright and clean and nice looking guy. I mean, that’s a storybook man”. Apparently Biden thinks that the rest of you African-American folks out there are dumb and fumble with words, dirty and scummy looking people. Don’t get mad at me saying that, I just reversed his words on the assumption that he mentioned Barack is the “first” in that statement.

UPDATE: I forgot to mention one of the bigger racists things that Biden has done when he said that “You can’t go to a 7-11 or a Dunkin Donuts unless you have a slight Indian accent…i’m not jokin!”. Haha, I can’t believe I forgot it because it was one of my foundation comments that set this whole post off!

We can also talk about Obama’s book and the audio version where he reads aloud “A white folk’s greed, runs a world in need”. Or where in that book he sits in his car pondering if Trinity Church and their values are the right thing for him. Let’s not forget what Trinity church is all about with Reverend Wright saying “The US government created the AIDS virus to control the black population” and “Barack knows what it is to be in a country and culture controlled by rich white people….Hillary ain’t never been called a ni**er!” among many, many, MANY other comments that apparently Barack just never heard while attending that church, “That is not the Rev. Wright I knew for 20 years”, did you see the reaction of the people in those clips!? that looks like it is probably the typical every Sunday sermon at Trinity. Not only that, liberals complain about the separation of church and state…why the hell is he talking about all those politics in his sermons!?

Back to Obama, I think you can tell by the slips of a person’s tongue what he truly feels in his heart, which leads me to comments about his own grandmother saying that “she once confessed her fear of black men that pass her by” and pulling a Jack Murtha with a follow up of “What I meant is that my grandmother is a typical white person”.

Oh boy, let’s get into sensitive grounds here. I feel, with all the attacks on Sarah Palin lately from leftists and the army of lawyers scattered around Alaska looking for dirt on a Governor with the highest approval rating, over 80%, and the attacks on her FAMILY…well that only allows me to dig into Michelle Obama and I am damn happy to do it. So let’s talk about this wonderful woman whom can do no harm that Cindy McCain apparently can’t hold a candle to, sarcasm. She said in regards to Hillary being ahead in the polls that “Black America will wake up”, which tells me she is more interested in specific interests of people rather than a general interest of the American people.

All of this doesn’t really surprise me though since the head of the Democratic National Committee, Howard Dean, has repeatedly made comments about the GOP being a “White Party”.

The fact is, if we were in a time where print was our only means of communication and you had what each candidate stood for and not their gender or race mentioned, Barack would have been out of this race 9 months ago. To that end, so would McCain (he is too liberal for most republican voters). Instead we are faced with a reverse-racism in this country to try and right the wrongs that our ancestors had done in slavery times. America made a mistake, then payed the price of the freedom of generations through bloodshed in war, those were a lot of white people fighting for the black cause, make no mistake about that. Don’t get me wrong either, that was the right thing to do but please don’t be a hypocrite then and say that war is evil.

If we are not allowed to associate Obama with Rev. Wright, William Ayers, Tony Rezko, Louis Farrakhan, Father Flaggart, ACORN and other radical associations then I would think it would also be fair to say that Obama can no longer associate McCain with Bush. You want to tell me how they vote the same way and you have reasons why he can make that association? Well I have more reasons to support Obama’s associations than you could ever come back to me with a McCain/Bush association.

Political parties can point the fingers all they want at the GOP as the “Party of Fear”, using tactics to scare people into voting republican but I will tell you now that this is no different than the threat of labeling those who do not vote for Obama “racists”.

I am a proud, patriotic, gun and religion clinging American who will not be voting for Obama because of his policies, anti-white behavior, radical associations (which are not guilt by association but guilt by PARTICIPATION) and the socialistic future that he has in mind for an America founded on the Constitution and Declaration of Independence.