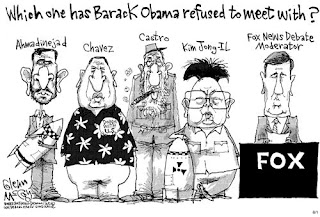 The Obama campaign, Drive-by Media, liberal bloggers and others have been on Gov. Sarah Palin’s case now since she was chosen as the VP on McCain’s ticket for many various, RIDICULOUS, reasons including the media being in the dark for her vetting process (or what liberals consider “lack thereof”, funny), her daughter’s pregnancy, her son’s down syndrome, her husbands prior involvement in an Alaskan succession group, right down to the most recent gripping-for-something-to-stick style of clothing (not mentioning of course, the messiah Obama’s hand tailored suit for his nomination acception). There is however one thing that sticks out to me that I half agree with, her lack of media interviews and appearances. I think if she would just be herself and not stick to the campaign’s talking points, people would absolutely love her. Liberals on the other hand, see the negative side and say that the campaign is shielding her from interactions. This, to me, is comparable to Barack Obama himself.Many will blast those of us who give conservative talk radio any consideration at all but if you haven’t been listening, you are missing out on a sweet little deal that really shows the character of Obama. For the past couple months, Sean Hannity (which Obama refers to VERY frequently) has mentioned the brother of Obama in Kenya that lives on less than $1 a month in a little shack. While Obama never mentions this situation and instead decides to attack McCain on his 8 houses and neglecting to mention that if he sold his $1.9 million home, he could easily afford 8 or more middle class America houses (He really understands us middle Americans!).

So Hannity has given Obama the chance to come on the program for the full three hours and speak his mind in an interview, and not for nothing! He has sweetened this deal by saying that he will send $10,000 to Obama’s brother in Kenya if Obama does the interview. He will send $1,000 if Obama merely calls up and gives him the address of his brother, since Obama preaches about the saying “I am my brother’s keeper”. You would have thought that a respectable guy would have jumped on the opportunity to help out a family member, that however is not the case.

Instead we will continue to criticize Gov. Palin for not doing interviews and praising Barack for taking the fluff interviews and not taking some hard questions that challenge him. Though, that is Barack Obama, always taking the easy way out of things and never facing problems head on because he is a WEAK person. Biden also recently said, twice, that this country will be tested because of Obama’s presidency and people will be initially upset with the decision they make, which leads me to believe that we will be attacked and do nothing in retaliation.

Note to terrorists: Obama has his arms open to your attacks and wants to send you chocolates and negotiate in return : )