Last week, in an article entitled Ann Rivers – Republican or Democrat? – The Label Doesn’t Matter to Her – She Just Wants Her “Next Step”, I outlined a fairly lengthy list of serious questions, that had gone unanswered, about this candidate for State Representative in Washington’s 18th Legislative District.. Although, as a result of that article, some of the despicable characters who Rivers keeps close company with have made some anemic attempts at mudslinging (along the lines of the old cliché about the pot calling the kettle black), the questions themselves remain unanswered.

Today, I received a link to a blog that seems to shed more light on some of the above-mentioned questions. These are:

In addition to providing illumination on these topics, the information on that blog also indicates that the answers to these three questions are all tied together. Based on this information the element that ties all this together is Ann Rivers’ relationship with the former Democrat Speaker of the House (WA), Joe King. According to that blog, Rivers and King are friends and business associates. King is, also, pointed to as Rivers’ largest fundraiser, including her donations from the Confederated Tribes of Grand Ronde in Oregon, as well as all of her other out-of-state donations. The blog goes on to note that Ann Rivers’ name has been “scrubbed” from the current version of Joe King’s Website but the blog’s Author provides the following picture, which captured the “unscrubbed” version: 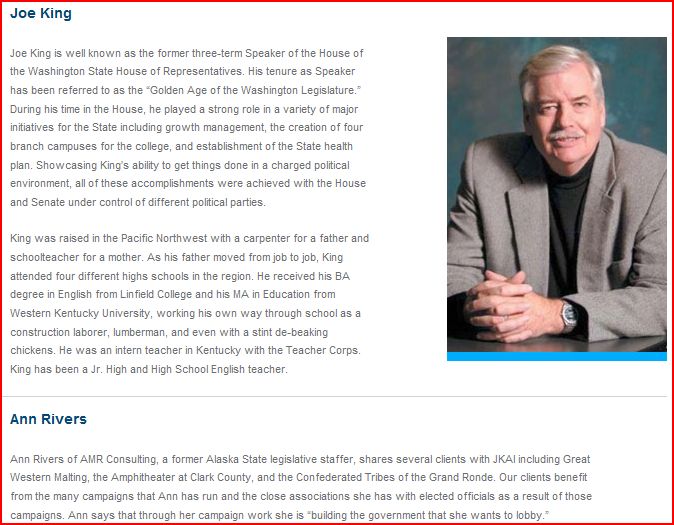 The link for the blog mentioned above is- http://kellyhintonwatch.blogspot.com/. Check it out and judge for yourself. As you’ll see, the blog concludes by posing the question, “Why is the Democrat Party supporting Ann Rivers behind closed doors?” I think the answer is, “Because she is more like them (Democrats) than she is like us (Republicans). I’ve heard Rivers referred to as a RINO (Republican In Name Only). Based on what continues to be revealed about Rivers, I think calling Rivers a RINO is an insult to RINOs.

Joe Biden Reportedly Having Trouble Keeping Up with Everyone Else at G-7 Summit
Townhall
'This tweet is an absolute lie': Glenn Greenwald calls out senators saying the LGBTQ+ community was targeted at the Pulse Nightclub shooting
Twitchy
Federal Judge Embarrasses the CDC With a Crucial Question on Mask 'Science'
Redstate
Why Is Austin Media Refusing to Release Description of At-Large Austin Shooter? Just Kidding. You Know Why.
PJ Media