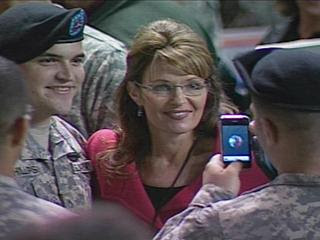 The public appearance is Palin’s first in the United States since resigning her office in July. Palin’s oldest son, Track, is a member of the brigade that recently returned from a yearlong deployment in Iraq.

“To Sarah Palin, who for the last year was the senior mom of the brigade and along with her husband Todd, is a distinguished member of the 1st Stryker Brigade Combat Team,” Col. Burt Thompson, the brigade’s commander, said.

“Ma’am, thanks for being here today and allowing your son to serve in our brigade. Thank you both for what you have done for your extended Army family and thanks for your unwavering support.”

Current Gov. Sean Parnell, who took over for Palin, was among the officials who spoke at the Thursday afternoon public event.

“It is my honor to welcome the pride of Interior Alaska,” Parnell said. “All Alaskans welcome your homecoming. The world is a far better and safer place today because of the sacrifices you made.”

The Strykers deployed to the Diyala province of Iraq on Sept. 11, 2008.

“Today we celebrate a job well done and your safe return to Alaska and the Fairbanks community,” Maj. Gen. William Troy, commander of U.S. Army Alaska, said. “The teamwork between military and community here in Alaska is like nowhere else.

“By every account the Arctic Wolves acquitted themselves brilliantly.”

Said Thompson: “Gentlemen, I report to you mission accomplished.”

The Fairbanks Daily News-Miner reports the monument also bears the name of a dog, Sgt. Jok, killed by a bomb while searching a house.

The Brigade stands at attention: 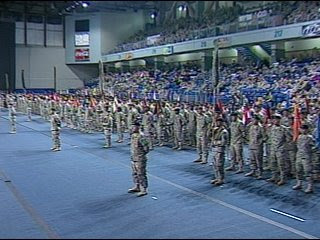 Governor Palin is honored as the Brigade’s “senior mom”: 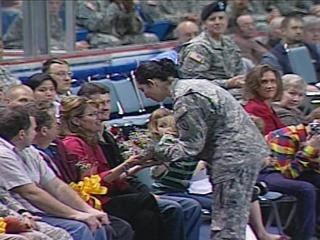 A memorial for those brave troops lost in battle: 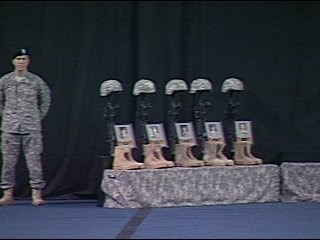 All photos courtesy of KTUU-DT Alaska