Another Side Of Sarah Palin: Financial Guru 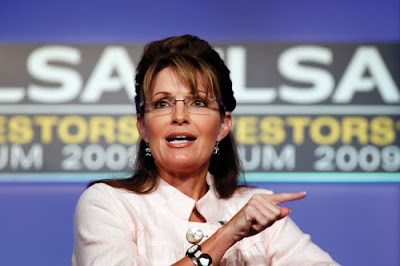 It seems that Sarah Palin has made another positive international splash with her latest Facebook entries. Early Tuesday afternoon Sarah released a strongly worded statement urging President Obama to make the right decision Afghanistan, and pledging to back him up if he did.

Later in the same afternoon, Sarah released an even stronger statement, with a very terse warning concerning our nation’s energy policy (or lack there of) and how years of continued energy mismanagement and counterintuitive policies have put our economy in a very precarious position. So precarious, that nations are openly discussing dropping the U.S. dollar as the world’s reserve currency.

Her statement on the economy caught the eye of the London Financial Times which in turn caused Reuters to report this:

The Financial Times, the salmon-colored authoritative newspaper that is closely read by traders and other financial types around the world, had an eye-opener for readers this morning.

It wasn’t the graphic showing a red downward line over a dollar bill.

The jolt comes at the start of the second paragraph in the top story of the day on the dollar, “Sarah Palin….”

The newspaper, whose articles can move markets, quoted the former Republican vice presidential candidate and ex-Alaska governor from her Facebook post on the need for energy independence. Palin links the dependence on foreign oil and large U.S. deficits to declines in the dollar .

“We can see the effect of this in the price of gold, which hit a record high today in response to fears about the weakened dollar,” Palin wrote.

Palin’s power for using her Facebook page to affect public opinion is not to be taken lightly. Remember “death panels” which turned the healthcare debate into rabid townhall meetings this summer — that phrase emerged from Palin’s Facebook page

Now in all fairness, the folks at the townhall meetings were already very passionate about the health care issue before Sarah condensed the insanity of ObamaCare down to two words, but it’s pretty clear that her ability to cut to the chase on any subject made a huge impact of the national debate over ObamaCare.

You see a lot of pundits that scoff at the notion that Sarah Palin is a force in the national debate using a networking site. They simply don’t understand, or don’t want to understand, the power of Facebook in Sarah’s media strategy.

Was watching Greta last night. She and her guest were discussing the phenomenon that is Sarah Palin, and how she uses Facebook. The one thing that hit me was their complaint that it was “one sided.” In other words, Sarah has her say, but isn’t up for “cross examination.” Of course, like everyone else, they were quick to admit, Sarah is effective using this method.

I guess I see it different than most, especially knowing who one of Sarah’s heros (and mine) is. Sarah is following the path the Great Ronald Reagan took after he lost his 1976 presidential primary bid, updated for the 21st century.

From 1976 to 1980 Reagan was “out in the wilderness.” Reagan, who was very media savvy, having spent a good chunk of his life in Hollywood as well as being a radio pitchman, turned to the radio to get his message out. Reagan gave regular short radio addresses combined with paid and unpaid speaking engagements to keep his message out there.

Social networking websites like Facebook have the same sort of impact today that radio did in Ronald Reagan’s day. People of all ages and economic classes are into networking now.

Sarah’s Facebook page is incredibly dynamic. You can check it any hour day or night and people are constantly posting well wishes, personal stories, and the popular “Sarah 2012!” rallying cry.

As of this writing, Sarah has 920,100 friends on her page, which is open to anyone to view, not just friends. This too changes hourly, as more people join day and night. This is roughly double the number of folks since Sarah resigned as Governor back in July. To put this in perspective, Minnesota Governor Tim Pawlenty, who is also considered a front runner in 2012 had around 7700 Facebook friends the last time I looked, which was about a week ago.

The advantage that Sarah Palin has, that the Gipper didn’t, is almost anything she does becomes a media event. Within minutes of posting something on Facebook, the major media knows about it and reports on it. Doesn’t matter if it’s friendly or hostile media, they still report it, discuss it, and keep her in the spotlight.

A very savvy media plan indeed. Throw in the many paid and unpaid speeches Sarah will be giving between now and 2012, the upcoming book tour, and her pledge to help elect Conservative candidates, of which she has some 120 requests from so far (!) And the strategy looks very solid.

Oh, and it doesn’t hurt that what she posts on Facebook is dead on!