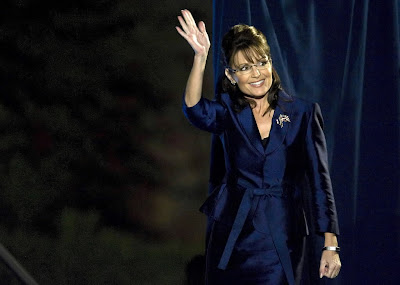 Yes, I know, I am a tad late, but, as is policy, we don’t talk about Sarah Palin’s schedule unless Sarah or her spokeswoman, Meg Stapleton, has verified that Sarah is indeed going somewhere.

There are just too many flaky promoters using Sarah’s name to sell tickets, without a verification from Sarah, who then try to blame her when she doesn’t show at an event she had never committed to in the first place. So we are not going to help them with that scam.

As we reported earlier, Sarah has almost 1100 invitations to speak at events, both paid and unpaid. Her attorney, Robert Bennett, announced this week that she is almost finished writing her book, so is now accepting invitations. Sarah will speak to various groups on a variety of issues that matter to America, and the world.

Sarah will also be speaking on behalf conservative candidates that share her vision for America, as well as for various charities, like those who support special needs children, and the military and their families.

Sarah will be speaking in Hong Kong at the CLSA Investor’s Forum, an annual conference of global investment managers. Previous speakers at the event include President Bill Clinton, Alan Greenspan, and Al Gore. The forum is sponsored by the CLSA Asia-Pacific Markets.

Their company spokeswoman Simone Wheeler said in a statement:

“Our keynote speakers are notable luminaries who often address topics that go beyond traditional finance such as geopolitics,”.

“We just felt it would be a fabulous opportunity for CLSA clients to hear from Mrs. Palin,” Wheeler said, adding that CLSA approached Sarah with the offer.

Those who follow Sarah Palin know she has a lot of foreign trade experience to draw from. Obviously, Palin worked close with the Canadian government to put together her signature achievement, the natural gas pipeline, but she has had many dealings with nations throughout the South Pacific as well as Russia and Canada.

Back in January of this year, as part of the big kick off to Alaska’s 50th birthday celebration, Sarah hosted a large contingent of dignitaries including Sergey Kislyak, the newly appointed Ambassador of the Russian Federation to the United States, who was making his first visit to Alaska.

“I am so pleased to be here this weekend. As discussed in my meeting with Governor Palin, it is encouraging to note the similarities between Alaska and the Russian Far East. Our existing commercial connections and the mutually beneficial nature of our professional partnerships can only help provide a measure of stability as, together, we face the global economic challenges that lie ahead.” 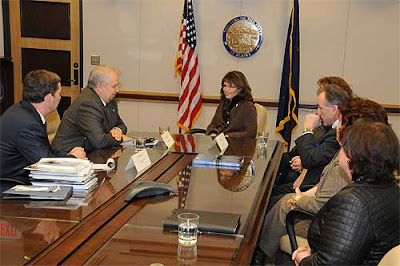 Members of the Alaska consular corps also participating in the weekend events were: Karen Matthias, of Canada; Hideo Fujita, of Japan; Hee-chul Kim, of South Korea; and Jose Luis Cuevas, of Mexico. They will be joined by honorary consuls of the Czech Republic, Poland, Finland, Seychelles, and Norway.

Obviously, we are happy to see that Sarah is starting to accept speaking engagements. This is a very great way for her to get her message out to the world, make a lot of new friends, and build relationships.

It’s a good to remember that many leaders do this. Former Vice President Richard Nixon, after losing to John Kennedy in 1960, went on the speaking circuit and used that to propel him into the White House, and the great Ronald Reagan was a prolific speaker taking many engagements both before he became Governor of California as well as afterward. This helped Reagan become President of the United States, as well.

Below is the press release from the CLSA:

Palin will address CLSA clients and delegates in a keynote speech at the 16th CLSA Investors’ Forum to be held in Hong Kong from 21-25 September. Palin joins a list of noted global leaders including Bill Clinton, Al Gore and Alan Greenspan who have chosen the CLSA Investors’ Forum as their platform of choice to reach global institutional fund managers and CEO’s of Asia’s leading listed corporations.

CLSA Chairman and CEO Jonathan Slone said: “As the first female governor of Alaska and the youngest person ever elected governor of that state, Palin has broken new ground in US politics and we are delighted that she will make her first visit to Asia to present at the CLSA Investors’ Forum.”

“CLSA consistently sets the benchmark for original and thought-provoking content, and aims to present global political and industry leaders whose policies and platforms have influenced global markets.”

Joining Palin, are more than 40 keynote and specialist speakers including Niall Ferguson, Harvard professor and author of the bestseller The Ascent of Money; Robert Fisk, Middle east correspondent for The Independent and one of the few Western journalists to have interviewed Osama bin Laden; Sir Ken Robinson author of The Element: How finding your passion changes everything; Satyajit Das author of Traders, Guns and Money; David Roche, economic and political analyst; and Marc Faber, investment contrarian and author of Tomorrow’s Gold.

Now in its 16th year, the CLSA Investors’ Forum is Asia’s premier investment conference providing unrivalled corporate access to 1300 global fund managers from 32 countries, representing more than US$10trillion in funds under management. Over five days, they meet with more than 400 CEOs and CIOs of Asia’s leading listed corporations in 2500 group and private meetings. Simultaneously, a seven-track schedule offers over 200 keynote, specialist, CLSA analyst and corporate presentations.

The CLSA Investors’ Forum is CLSA’s annual flagship event and one of six held throughout the year. Participation is by invitation only.