The Iowa caucuses are just around the corner. But it remains to be seen how they will play out.

Caucuses are unpredictable and they require highly coordinated get-out-the-vote-efforts. Because of that, traditional landline polling isn’t the best indicator of likely outcomes.

With that said, it is significant that Ted Cruz and Donald Trump are leading the polls, simply because their numbers far surpass those of everyone else running. But while Cruz is viewed as having the best ground game in Iowa, having consolidated support from the evangelical constituency (led by Bob Vander Plaats) and Rep. Steve King, Trump’s ground game is sorely lacking and he is likely to underperform his poll numbers.

But Cruz isn’t alone in his strength. Another candidate with a great ground game is Rand Paul. Influential Iowa radio host Steve Deace, a Cruz backer, has given Paul top marks for his ground game:

Paul adviser Steve Grubbs, who is heading up his Iowa operation, recently spoke about it to Breitbart news:

“Seventeen to twenty-seven thousand votes is win, place or show” Paul’s top Iowa adviser Steve Grubbs told Breitbart News, coming off a rally attended by 150 Iowans. Grubbs is the former chairman of the Iowa Republican Party. He previously led Bob Dole and Steve Forbes to great success in the Iowa caucus. Now he’s working at the top of Rand PAC.

“We have 1,019 precinct campaigns in every corner of the state,” Grubbs said. “He’s peaking at just the right time. Four years ago, Rick Santorum was in last place 23 days out. He rose to win it. There’s been a lot of movement here in the last three weeks. If you want to be in the right place at the right time, you need to have the ground game ready to go.”

“For the first time since 2000, the caucus will occur while college is in session,” Grubbs said. “We have campus organizations at more than twenty University of Iowa colleges and universities.

“They’ll register at the caucus,” Grubbs said of his younger libertarian-minded voters. “It’s better to register the day of the caucus. If you register January 10 at your local county auditor, then they’ll pull the punch list on caucus day and your name won’t be there. Because they’re just using the most recent list they have from the state of Iowa, and that’s a government! How often do they refresh? Then if your name isn’t there, there’s a challenged ballot.”

Paul himself recently pointed out that the campaign has a goal of turning out 10,000 college students:

In an interview with PBS NewsHour’s Gwen Ifill on Thursday, the Kentucky Republican said that his campaign has a “real shot” of reaching its goal to draw 10,000 students to the polls next month — an ambitious goal for any GOP candidate, including the current front-runners, Sen. Ted Cruz of Texas and real estate developer Donald Trump.

The campaign is targeting students “on campus, really trying to organize dorm by dorm,” Paul said. “We have a really good ground game.”

Paul said his campaign has placed 500,000 phone calls to voters across Iowa and has 1,000 precinct chairs in the state, more than any of his GOP rivals, with two weeks to go before voting begins.

Note: Since Paul’s interview a few days ago, the campaign has reached 700,000 phone calls and has a goal of 1 million.

Paul has some strong outside help that adds yet another layer to his impressive organization. PurplePac reserved $500,000 in ads for him earlier this month. But perhaps more impressive have been the efforts of Concerned American Voters, lead by Matt Kibbe (formerly of FreedomWorks) and Young Americans for Liberty President Jeff Frazee. CAV has had at least 40 full-time, paid staffers since it started in June.

Frazee recently gave an update on the notable progress his PAC has made:

“We’re waiting for Rand to catch fire,” Frazee said. “If that happens in Iowa, there are millions of dollars sitting on the sidelines, waiting for him.”

Concerned American Voters got off the ground in June, and since then it has made 1.1 million voter contacts in Iowa to identify 37,352 likely caucus goers. They’ve been marked as certain to support, likely to support, or maybe to support Paul.

Overall, the Paul organization-both the campaign and outside support-is extremely impressive. And the goal of forging a winning coalition cannot be understated.

Though Paul has focused heavily on the college vote, he hasn’t neglected rural areas of the state. While some candidates such as Donald Trump have taken to pandering on ethanol mandates, Paul has been emphasizing his strong opposition to eminent domain:

He spoke to a crowd of about 80 in Oskaloosa at an event billed as an eminent domain town hall. The Kentucky senator said while he is in favor of creating energy independence by building domestic pipelines, he is opposed to any land being taken from private property owners without proper compensation.

“One of the worst powers, one of the most egregious powers you can give a government is the power to take your property,” he said. “And we have a government that’s grown too large in this sense.”

Paul said while he supported the Keystone XL pipeline, he said he voted against a bill that would allow the use of eminent domain to gain easements. 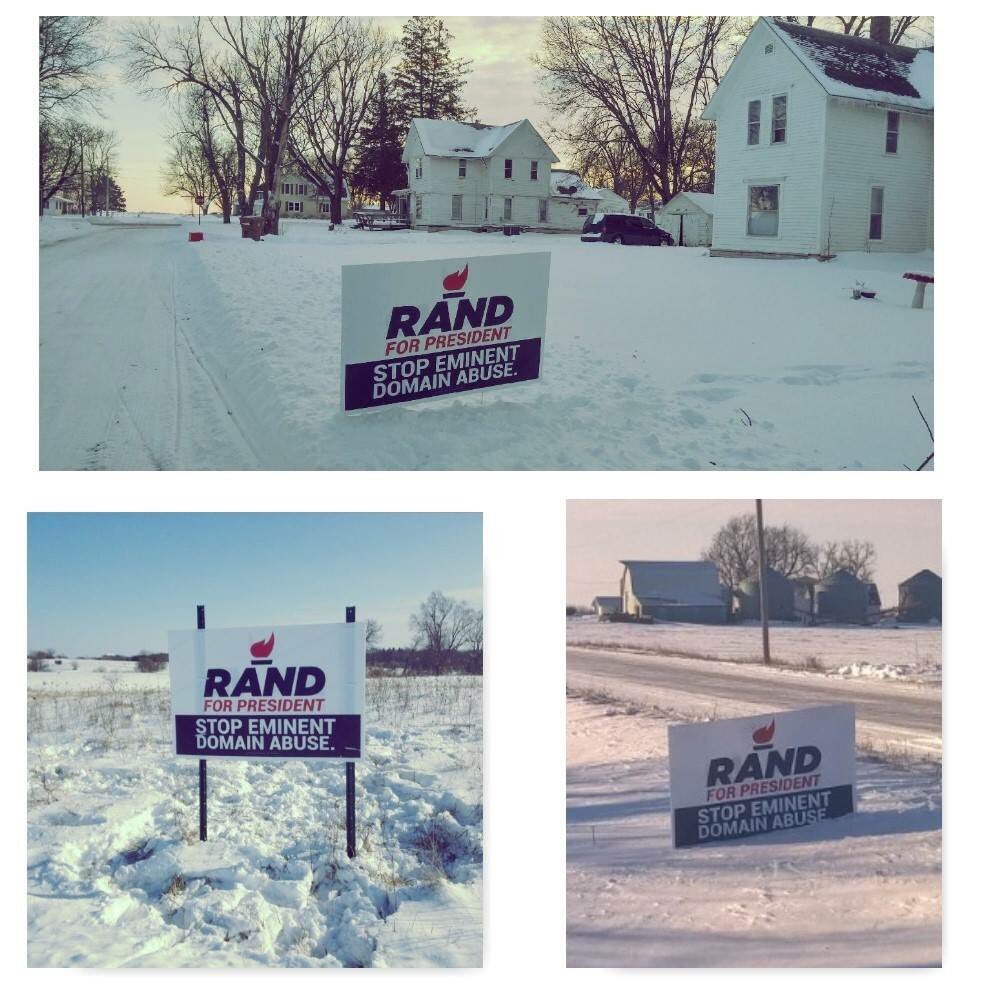 Paul hasn’t conceded the evangelical vote either. While Cruz and Carson have a clear advantage with the bloc thanks to their strong personalities, policy-minded evangelicals have been impressed with Paul’s clear-cut solutions on abortion and marriage. A longtime opponent of Roe v. Wade, Paul just re-introduced his Life at Conception Act, which would give the unborn constitutional protection under the Fourteenth Amendment. Paul also offers a viable solution to protect the sanctity of marriage: he favors removing the authority of government to define the institution.

Traditional polling is on the way out. It is no longer reliable.  If you thought Rand Paul’s campaign was on it’s deathbed after he missed the last debate, think again. He will surprise-maybe even shock-in Iowa.