Of Course The Media Misrepresents Phil Robertson's Views On ISIL 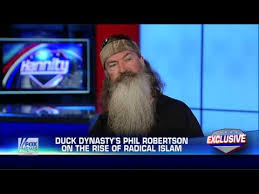 On Sean Hannity’s TV program on FOX News last night, the host interviewed Phil Robertson on a variety of topics.

The issue of ISIL, or the Islamic State of Iraq and the Levant, was brought up.

Here are some of Robertson’s comments:

“In this case, you either have to convert them, which I think would be next to impossible. I’m not giving up on them, but I’m just saying either convert them or kill them, one or the other.” “I’d much rather have a Bible study with all of them and show them the error of their ways and point them to Jesus Christ. However, if it’s a gunfight and a gunfight alone, if that’s what they’re looking for, me personally, I am prepared for either one.”

Robertson is drawing upon an irony here. The theology of ISIL is “convert or die.” Robertson would offer them the same choice.

Unless ISIL converted, they would retain their ideology of genocide in the name of Allah, and thus would need to be killed. This is common sense.

The media is more interested in distorting facts and trashing Christians than being honest with the American people. This is just the latest example of how the media feeds anti-American leftists their red meat.