Just when you thought RINO Republicans couldn’t get worse on the first amendment after Lindsey Graham questioned whether bloggers have Constitutional rights or not, it did, when Graham speculated that mail could be censored if deemed “necessary”.

And then it got even worse.

The arch-hawk and arch-police statist from New York, Congressman Peter King, is calling for the arrest of reporter Glenn Greenwald.

Slow down a second…don’t we have an unalienable right called freedom of the press, which happens to be the supreme law of the land?

Not according to Peter King, who stated: “No right is absolute and even the press has certain restrictions.”

The understanding among the framers of the Constitution was that one’s rights end where another’s begin. In effect, then, our rights are absolute.

Not to mention that the main reason for the freedom of the press was to keep the government at bay; to prevent it from becoming too tyranical. Certainly whistle blowing, and/or the reporting thereof, falls under that category. Don’t tell me the government can simply classify something as “top secret” and hide it away forever. That is an unacceptable excuse.

For King, the “top secret” card is a valid excuse:  “I think this clearly does violate U.S. code, which talks about releasing classified information. So, you know there is a law out there.”

He is right that there is a law out there. It is called New York Times Co. v. United States, in which the SCOTUS ruled that the press could public classified documents, in that case it was the Pentagon Papers. Hear, hear for the Supreme Court rarely doing something right and setting the precedent against censorship!

As for King’s assertion that,  “he said he has names of CIA agents and assets around the world and threatening to disclose that”, so far he is the only person to make that accusation. And if he makes such a claim, he better damn well have a source. So far, he has yet to cite one.

Mr. King, we don’t arrest people based on hearsay soundbites.

Not surprisingly, King pulled the national security card in his rant: “That to me is a direct attack against Americans, putting American lives at risk.”

The only attack the American (government) has suffered at the hands of Greenwald are blows to its ego and trustworthiness. As for normal, real Americans, their eyes have been awoken to the gross breaches in our constitutional compact by the Obama administration.

Americans are more at risk when we nation build instead of win wars.

Americans are more at risk when we send foreign aid to hostile nations.

Americans are more at risk when we promote “democracy” which translates into radical Islamic chaos.

And, as history has shown, the people are at risk when their government becomes unconscionably powerful.

Greenwald is responsibly witholding information that would compromise national security. He is a professional journalist and a lawyer. He is not a fool. He should be praised as a refreshing breath of non-partisan, fact-filled media air.

I cannot end this post without pointing out the endless hypocrisy which Peter King lives with on a daily basis as a hardliner on terrorism.

Greenwald responded to King today with a curious tweet:

“Only In America can a renowned and devoted terrorism supporter like Peter King be the arbiter of national security and treason.”

It’s true, Peter King has been a supporter of terrorism in the form of the Irish Republican Army (IRA). 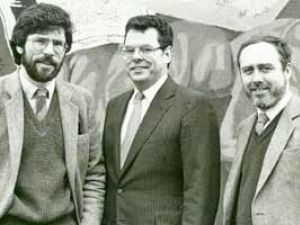 (Above: Peter King with IRA leaders)

You can read about his involvement at length HERE, and HERE.

However, the hypocrisy can be summed up with this quote from King.

“We must pledge ourselves to support those brave men and women who this very moment are carrying forth the struggle against British imperialism in the streets of Belfast and Derry,” Mr. King told a pro-I.R.A. rally on Long Island, where he was serving as Nassau County comptroller, in 1982. Three years later he declared, “If civilians are killed in an attack on a military installation, it is certainly regrettable, but I will not morally blame the I.R.A. for it.”

Before King throws anymore stones, he needs to publicly apologize for his past.