Of course, as the article cited above points out, Pickens stands to gain a great deal from any switch to natural gas. He is heavily invested in both the natural gas industry and in wind energy.  His highly-marketed plan would have American taxpayers subsidize huge investments in wind turbines so that we could then shut-down natural gas power plants and use that fuel to power Over-The-Road (OTR) trucking, which consumes huge amounts of diesel fuel that made from the same petroleum as gasoline.

Before deconstructing all of this, let’s dispel a few myths:

1) The United States has an energy policy. That this energy policy is fragmentary, illogical, lacks cohesion and generally sucks noodles is irrelevant. Our energy policy is influenced by regulations from nearly all sectors and levels of government. These government agencies have regulations cover the production, transportation/transmission, consumption and efficiency of almost all forms of energy. Much of our energy policy is unstated: That is, the policy is covered not by actual regulation, but by interpretation and by how forcefully the existing regulations are enforced.

2) There is no “magic bullet” to lower energy prices. Forcing everybody to switch from petroleum to natural gas will simply have the effect of raising the prices of natural gas and (potentially) lower the price of oil (a big deal for T. Boone Pickens and his energy plan). Switching to hydrogen, liquid propane, gassified coal, batteries or any other alternative will do the same thing. No one solution can be the answer to everyone and yet also keep costs low.

3) Related to the above, there’s no such thing as “free” energy. At least, it’s not free when we convert it into something we can actually use. Even the “free” solar or wind energy requires huge investments in wind turbines and solar cells. Solar heat collectors require investment in mirrors, pipes and computer systems (that ensure the greatest efficiency). All of those costs have to be paid for, as well as the maintenance of the equipment.  Even if we could tap into the Earth’s magnetic field (a favorite of conspiracy theorists), it would require a massive initial investment in the collectors.

5) The Obama administration actually has a cohesive energy policy. It’s just a stupid policy. The President and his cabinet know that if they publicly stated, “Our policy is to end drilling for fossil fuels and force everyone to use much more expensive energy systems, like solar and wind, subsidized by tax dollars,” nobody would go for it. So the expression of their policy is a vague statement of “all of the above”. Meanwhile in reality they oppose most petroleum drilling, actively denigrate coal and hand out money to politically connected “green energy” companies.

Pickens has managed, albeit superficially, to combine the favorite energy policy scape goats of the both the Left and Right (the Koch brothers and President Obama, respectively) as though they were colluding to keep gasoline prices higher. A ridiculous concept when one considers the political positions of each and a naked attempt to coalesce both “sides” of the issue around his position.

The Koch brothers probably realize that switching to natural gas as an energy source for motor vehicles would drive up the resource costs of their businesses. I’m certain that plays no small part in their decision to fund organizations that support “drill here, drill now” and other energy policies that don’t use natural gas as a magic bullet energy solution. That doesn’t mean they’re trying to keep energy prices high or that they’re somehow colluding with the President or that they oppose an organized, sensible energy policy. It just means that they don’t support Pickens’ preferred energy policy.

Pickens did manage a sincerely honest and factual statement about energy policy, however:

Indeed. Both the Republicans and the Democrats have managed to enact policies and regulations that have pushed the United States into a precarious national energy position. It’s over-regulated and heavily-subsidized. Lobbyists from all sides have gotten their little bit of regulation and continue to push for more, at the same time litigating every decision related to energy. There’s so much government in the way that nobody in the private sector can innovate and come up with intelligent, cost-effective solutions.

The Koch brothers are using their money and influence to affect energy policy, there’s no doubt about that. They’ve put a lot of money into Right-leaning organizations, some of which lobby on energy issues. However, Pickens is doing the exact same thing.  Like the Koch brothers and everyone else invested in the issue, he stands to benefit greatly if his preferred energy policy is enacted. 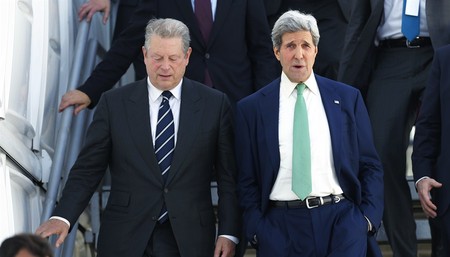