An Assassination Attempt on American Liberty

There aren’t enough words to describe the tragedy that occurred in Arizona when 22 year old gunman Jared Lee Loughner walked into a Safeway in Tucson and shot Congresswoman Gabrielle Giffords, along with 19 others. Fortunately, thanks to a fast-thinking intern, quick medical attention, the miracle of prayer, and the luck of where the bullet entered and exited her skull, Rep. Giffords is still with us. Doctors remain optimistic about her recovery, and that is great news.

Sadly, six other victims weren’t as lucky. Thoughts and prayers go out to their families. I hope they are in a better place now where there’s no such thing as a 24 hour news cycle. To use their deaths, as some have done to demonize their political opponents, shows a complete callousness for life and does a great disservice to grieving loved ones. It disappoints me to think the American political process could stoop this low. And yet here we are.

Just minutes after Rep. Gabrielle Gifford was shot, before the blood was dry, progressives began blaming the tea party, Sarah Palin, and conservative rhetoric for this massacre. Was the shooter a member of the tea party? No. Was there any proof he had ever supported Sarah Palin or paid attention to her tweets and facebook posts? No. But such lack of evidence didn’t stop the Left. They had a narrative to push, a narrative laid out nearly a year ago by President Clinton, that somewhere on the right the next Timothy McVeigh was out there and opposing Democrat policies would surely send them over the edge. This is worse than guilt by association. It’s guilt without association, connecting invisible dots to paint dissent as radical and silence opposition.

It didn’t take long for pundits on the Left to take up Bill Clinton’s campaign. Before a shooter’s name was even disclosed, Markos Moulitsas and Paul Krugman had already begun to paint right-wing political rhetoric as the culprit fostering hate in America. In fact, it got so out of control that Sarah Palin became a trending topic on google and twitter during the aftermath of the deadly shooting. Moulitsas, founder of the Daily Kos, where true hate speech flourishes, tweeted, “Mission accomplished, Sarah Palin.” And that was one of the nicer things that was said all day.

As for Krugman at the NYT, one can only hope he’s ashamed of printing this nonsense:

“We don’t have proof yet that this was political, but the odds are that it was.

She’s been the target of violence before… she’s a Democrat who survived what was otherwise a GOP sweep in Arizona, precisely because the Republicans nominated a Tea Party activist. (Her father says that “the whole Tea Party” was her enemy.) And yes, she was on Sarah Palin’s infamous “crosshairs” list.

Just yesterday, Ezra Klein remarked that opposition to health reform was getting scary. Actually, it’s been scary for quite a while, in a way that already reminded many of us of the climate that preceded the Oklahoma City bombing.”

In other words, it had to be an anti-Obamacare, tea party member because hey, they ran against her in a tough-contested election. What?! Anyone who refuses to condemn Krugman for printing such false assumptions with no evidence to speak of is clearly as sick as he is, and that brings up a very important point. If the Left really believes that charged political rhetoric causes violent outbursts by deranged individuals, why are they using this same vitriol against Sarah Palin? Either they don’t believe the very hypothesis they’ve been hyperventilating over the past two days or they are hoping something equally despicable happens to the former governor. Which is maybe why this image is making the rounds online: 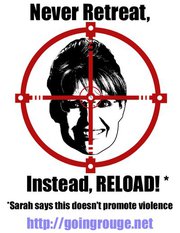 Now I don’t believe this will lead some sicko to kill Sarah Palin, as disgusting an image as it may be. I do find it extremely distasteful, bordering on an actual threat (you can imagine the outrage if this image was found in the shooter’s home with Giffords’ head depicted instead). It’s surely more egregious than the map liberals are whining about with “targets” painted over congressional districts. But obviously the Left must not believe such over-the-top rhetoric causes disturbed individuals to commit bloody slaughters or it wouldn’t be making the rounds online. Unless they really want to see Sarah Palin assassinated. Which even I highly doubt.

At this point, I would normally spend time defending Sarah Palin and the tea party, dissecting the idiocy of Paul Krugman’s charges, pointing out that one of the shooter’s high school friends said he was an atheist and called him “left wing.” I might also point out that Rep. Giffords was the first Jewish member of Congress to be elected in Arizona and that Jared Lee Loughner cited Adolf Hitler’s Mein Kamph as one of his favorite books. Or that he seems to have been planning this mad act of violence long before Palin’s map or the tea party ever took form. But none of that really matters. Jared Lee Loughner was obviously a sick and twisted individual.

Here’s what does matter. We cannot let a personal tragedy for some become the great American tragedy by senselessly banning forms of political speech or attempting to police the thoughts of our citizens. We cannot become a nation that tries to set guidelines to determine which dissent is appropriate and which is incendiary. To do so would shred the Constitution, limit the right of the people to redress grievances against their government, and shrink the voice of the opposition in the face of an all-powerful state.

Now is not the time to weaken the first amendment for the promise of a little more security for our elected officials. Thousands, no, hundreds of thousands of over-the-top political statements have been uttered by both the Left and the Right over the past few years, yet incidents of violence have been so rare, they are nearly nonexistent. Perhaps one of the best examples of over-the-top rhetoric is that of “truthers” who believe the government of the United States is responsible for the attack on the Twin Towers on 9/11. Yet rather than force this kind of speech underground, giving it a kind of dangerous legitimacy by banning it, the most effective response is to refute it with facts out in the open, to smoke out the moonbats and let Truth prevail.

Millions of examples of vitriol dot the landscape of American history. So far, no event, not even the assassination of John F. Kennedy or the attempted assassination of President Ronald Reagan, has caused Congress to re-think free speech or pass a law to limit political discourse as protected under the first amendment. Not only does this incident not rise to the standard of those tragedies, there’s no evidence that the shooter in this case was ever influenced by the statements of any political speech, Democrat or Republican. It’s more likely he was a nut, and like John Hinckley, could have just as easily taken the wrong cue from a movie starring Robet DeNiro and Jodie Foster.

Any effort to limit political speech by this Congress, and you know it’s coming from the Democrats, should be firmly rejected. This is as close to a Reichstag fire moment as we’ve come to in this country recently. Should the first amendment be chipped away to only protect non-offensive, politically correct speech, we really will be entering a new era of tyranny. January 8, 2011 will go down not as the day a sitting congresswoman was almost killed, but as the day American liberty took a great fall.

Yes, the Left’s reaction to this random shooting is a threat to our lives and liberties, and no, I won’t tone down my rhetoric to please Paul Krugman or Ezra Klein. But, then again, I don’t find the Constitution “old and confusing.”

Justice Kavanaugh Just Boiled the Abortion Debate Down to Its Most Fundamental Core
Townhall
Jussie Smollett's trial might not be going his way as evidenced by reporter's thread
Twitchy
Like Rats From a Sinking Ship: Another Top Dem Announces Retirement Before '22
Redstate
40 Years Ago, Monty Python Predicted (and Mocked) Wokeness
PJ Media